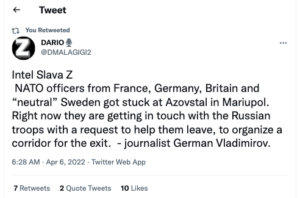 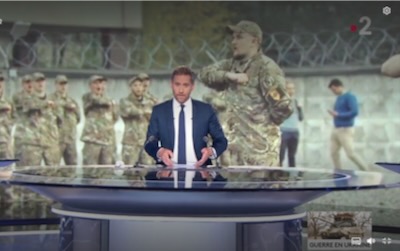 According to the assurances given both by a Russian and an Ukrainian source, French soldiers from the Special Operations Command are currently in Mariupol (Ukraine) side by side with the Azov regiment.

Public broadcaster France-Télévision, which had so far brushed off the ideological character of the Azov regiment, presented a report on it during the France-2 evening news, on 31 March 2022. The report acknowledged that the regiment had been infiltrated by neo-Nazi elements in 2014, singling out one of its founders, Andriy Biletsky, but insisted that it had evolved into a respectable defense force. However, France-2 omitted to mention its other founder, Dmytro Yarosh, who is currently Adviser to the Commander-in-Chief of the Armed Forces of Ukraine.

The French channel referred to an old United Nations report documenting systematic torture in Eastern Ukraine, but it neglected to mention either the Azov regiment’s special prisons uncovered by the Russian army, or the recent statements issued by the UN in this regard. France-2 also failed to explain the weight of the banderites in Ukrainian history, reducing the prominence of the neo-Nazis to brandishing the swastika. Having thus whitewashed the problem, it measured the threat to represent between 3,000 and 5,000 men, while Reuters agency ensures that the paramilitary banderites currently number 102,000 men, split into several militias incorporated within the Territorial Defense.

According to the daily L’Opinion, Military Intelligence chief General Éric Vidaud was relieved of his duties on 29 March 2022. Éric Vidaud happens to have been the former commander of special operations.

On 30 March, five Ukrainian helicopters attempted to flee Mariupol, the stronghold of the Azov regiment. Two were shot down. The survivors were taken prisoner by the Russian army. They immediately spilled the beans.

When it comes to logistical matters, troops attached to the Special Operations Command are placed under the orders of Chief of the Defense Staff, General Thierry Burkhard, but they receive their orders directly from the Chief of the Armed Forces, President Emmanuel Macron.