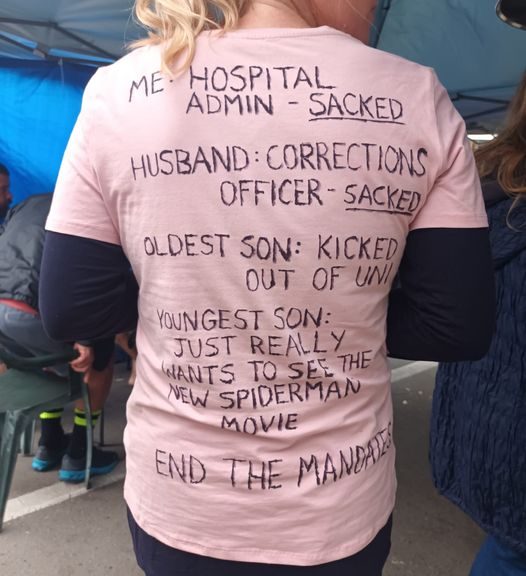 Police finally seem to be going harder on the protesters that are causing inconvenience to the people of Wellington.

Police Commissioner Andrew Coster has issued an ultimatum, move your cars off the streets, or they will be towed.

This comes as we are now in week two of the protesters causing havoc in the capital, and nearby businesses have had a gutsful.

Police is putting into action its Major Operations Centre at the headquarters in the capital in a bid to quell protesters “unreasonably impacting the city”.

ACT leader David Seymour has met with a Parliament protest “intermediary” to deliver conditions to be met for dialogue with lawmakers.

Seymour said on Wednesday he had met with the unnamed intermediary out the back of the Backbencher, a pub across the road from Parliament forced to close due to the week-long protest which has blocked traffic in the surrounding area of central Wellington.

“For the length of time that we’ve had this protest, I’ve been listening to people who are affected in the area, people like Alistair Boyce who runs the Backbencher who had to close his business due to abuse from protesters,” Seymour told reporters at Parliament.

“Yesterday Alistair got in touch with me and said, ‘I think the situation is changing, I think the worst elements of this protest are being removed, I think that it has become possible to work with it and I believe that it is time for some dialogue’.

“I answered Alistair’s request and met with several people representing the emergent leadership of the protest, at his pub outside the back of the Backbencher. I did this because I believe it is time for a mature deescalation of this situation.

“The people involved in the protest – some of them have engaged in reprehensible behaviour and the protest altogether continues to make unacceptable interruptions to Wellingtonians going about their life – are nonetheless people who are human, who are part of New Zealand, and eventually we need a way to glue this country back together when this is all over.

“That’s why it is time for dialogue. But that has to happen with certain conditions.”

Seymour, who was joined by ACT MP Nicole McKee, said the conditions he delivered included removing vehicles blocking the roads around Parliament and Victoria University, and a guarantee that no more abuse would be hurled at passersby.

Labour MP Sarah Pallett said on Twitter she had been abused by protesters on her way home.

“Men yelled I’d be ‘got rid of’, I’ve had death threats emailed, my colleagues and staff verbally abused (one spat at) for wearing masks, our partners and children (CHILDREN) tracked and threatened.

“It’s NOT a peaceful protest.”

Prime Minister Jacinda Ardern has so far refused to engage with the protesters, who have camped outside Parliament in tents since early last week.

Police last week arrested more than 120 protesters after House Speaker Trevor Mallard issued a trespass notice. But a core group remained over the weekend, despite the Speaker’s controversial attempts at dispersing them with sprinklers and loud music.

The National Party on Wednesday lodged a notice of motion of no confidence in the Speaker over his actions towards the protesters.

Seymour wants dialogue with them.

“We need to be clear that those are the preconditions for talking. But there also needs to be a mature deescalation from the Speaker of the House calling people feral, to turning on sprinklers and playing loud music.

“If we don’t have that, I don’t think that we have a way forward and I don’t think it would be in the best traditions of New Zealand for the stand-off to continue as it currently is.”

Seymour acknowledged there were views being shared by protesters that he did not agree with, such as anti-vaccination.

“There’s quite a range of people there. In my listening to people, there were people that have views on vaccinology that I just think are absolutely out-to-lunch, there were also people that are vaccinated and have concerns about the way people haven’t been listened to and they can’t take their kids to swimming, or whatever.”

Seymour said a large part of the protesters’ concern is that “they feel no one is listening to them and that’s not going to happen on any scale with MPs out on the forecourt until those conditions are met”.

“I believe a member of the Government should meet with them. It’s not often the Prime Minister meets with a protest like that but if those conditions are met I think they should.

“I don’t think we’re ever going to glue this country back together if the response from Labour and some parliamentarians is to call them feral, turn on sprinklers and play ugly music at them.”

National leader Christopher Luxon has acknowledged some of the protesters’ frustrations, but would not support his MPs engaging with the protesters.

“No, as you know, in the National Party we’re pro-vaccination, pro-boosters, and that’s been our position as a party, and so everybody’s been very clear about that,” he said on Tuesday.

“We respect people’s right to protest but we expect them to do it within the rules and that’s not been happening. We’re a party of law and order and so at this point we wouldn’t be doing that.”

The Greens are concerned about a superspreader event.

“Some of us in the Parliamentary precinct are immunocompromised. Aotearoa has told us, the chronically ill, disabled, elderly, that our survival, ability to work & go out matters. Now, our people see and hear these dehumanising protests, contesting our right to exist. It hurts,” Green MP Golriz Ghahraman wrote on Twitter.

But New Zealand First leader Winston Peters is supporting some of the protesters’ calls to end COVID-19 vaccine mandates.

“It’s time to remove these unnecessary mandates & give kiwis back their right to work,” the former Deputy Prime Minister wrote on Twitter.

“Kiwis who lost jobs due to mandates should be reinstated. This can be done safely with the high vax rate & use of RATs. We need balance & commonsense – not more scaremongering & enforcement.”