Are vaccinated people contagious? Dr. José Luis Sevillano comments on a mysterious ‘component’ that seems to be alive found in vaccines 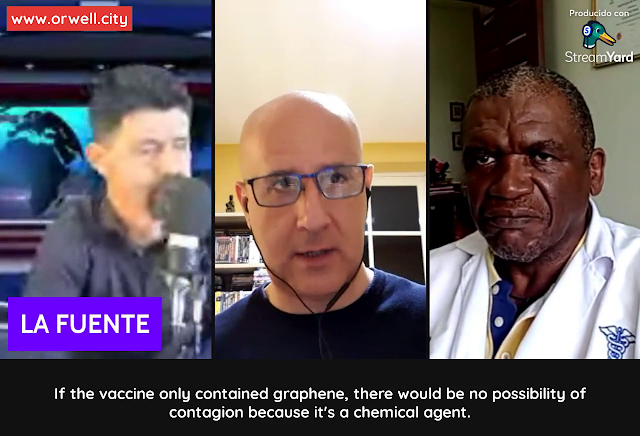 During the program, several topics related to pandemics were discussed, especially regarding the content of the vaccination vials.

Dr. Sevillano has said in the programs he has conducted on La Quinta Columna that graphene is only one of the many components identified to date. Others are very intriguing and cause for concern since they appear to be alive

At the moment, it’s unknown what these things that move when seen under microscopy are, and there’s a lot to theorize about them, starting from the fact that it could be nanotechnology whose function would be linked to creating graphene meshes ―as Ricardo Delgado from La Quinta Columna has sorted in some programs―, or that it could be something biological whose function would be to synthesize graphene inside the body.

Another theory today shared by Dr. Sevillano is that these elements that seem to have a life of their own could be related to the possible ‘contagions’ reported by unvaccinated people after being in contact with vaccinated people.

Orwell City has prepared on this occasion the fragment of the interview of more than 3 hours in which Dr. Sevillano reveals the possible cause of the mysterious contagions reported by unvaccinated people.

Dr. Wilfredo Stokes: These bastards are making money with whatever the vaccines contain. So I would like to ask Dr. Sevillano for advice, or a conclusion, about this, please. If there is, at least theoretically, the possibility that these patients could be infectious or not? Or contagious.

Dr. José Luis Sevillano: Yes, good question. Because many people are wondering about it. Especially now that there are starting to be real cases. Not of PCR, but people are falling ill in some places.

We have to go back to what we have said so far: to look for the truth. Truth based on evidence.

Wilfredo said earlier that he reasoned by saying, ‘If there’s no virus, how is the vaccine going to work?‘ But of course, as they’re the ones who look for the virus, purify it, isolate it, sequence it, and you don’t have the equipment to do it on your own, they can throw you the idea that there is a virus. And then you say: ‘And now, how do I prove that there is a virus or that there isn’t if they are the ones giving the information and I can’t trust them?’

You see, the question is to see with your eyes what is happening. And the moment we start to see magnetic arms, we have the answer. If there are magnetic arms, there is no virus for two simple reasons. Very simple. If there are magnetic arms, it means that the vaccine does not carry biological material. If there is no biological material in the vias, what are we being vaccinated against? Against nothing that has ever existed. Therefore we have to refer to the truth in this matter, as in all others. Especially when people in high places control the information. We have to refer to the evidence: to the clinic, to what we see. And the same thing happens here.

We don’t know whether people are contagious or not. Notice that I told you before that if the vaccine only contained graphene.. If the vaccine only contained graphene, there would be no possibility of contagion because it’s a chemical agent. It’s a toxic agent. It’s an intoxication. Intoxications by chemical agents aren’t contagious.

But I told you before that these vaccines also contain unknown biological material. And we don’t know what that material is and if it could be synthesizing graphene inside our body. In other words, pay attention because it’s… It’s a theory that is still to be developed, still to be investigated. But it’s a possibility that there is something alive in the vaccines and that develops inside us. And in that case, maybe, that living thing that’s there is contagious.

So, since we don’t know, only when we have seen the evolution of the diseases in our environment, we will know ―exactly― if it’s contagious or not. How will we know? As simple as usual. We’ll see which people in a family were vaccinated and which weren’t. And when they start to fall ill, we’ll say, ‘All of them are ill, and they weren’t all vaccinated, it means that there’s something contagious here.’

But here, we have to consider one thing that causes a lot of confusion in this research. And it’s that if there are radiations are creating the fifth wave and those to come ―radiations make people sick with an appearance of contagion―, it’s going to be hard to know whether the vaccine causes contagion or not. But at some point, we will find the answer with the clues they give us.

If it’s contagious, at some point ―there’ll be some detail after some cases―, we’ll find out. For example, in very isolated places, where there is no technology, nor wireless signal, and there are vaccinated and unvaccinated people, and where there hasn’t been any contagion, and there are beginning to be, then we’ll know if the vaccine is contagious or not.

We have to be very alert in those places where people fall ill, to see in which environment those people who fall ill move. If they’re families where there was a mixture of vaccinated and unvaccinated people. Do you see how with common medicine very simple studies can be carried out ―very simple―, and the truth can be found without complicating life too much?

Although there are factors that can make it difficult to reach a conclusion, you can generate these studies by looking for the target population you want to study, by saying: ‘This one is no good to me because it’s surrounded by antennae here and I will never be able to know it. I’m going to look at that other population. That one that doesn’t have antennas around it.’ The confounding factor of the antennas is eliminated when I study the population that is far from antennas and in which I know they are vaccinated, but not all the individuals. I’m going to see if this disease is contagious and, eventually, I’ll know if those who fall are all vaccinated for multiple reasons.

So we’re going to see people falling ill in the areas where there are antennas. They will be the strangest clinical pictures and, above all, neurological. Many neurological cases. And people who are far away from the antennas, most probably with time, can also create problems.

And I fear cases, above all, of coagulant type. That is to say, coagulation problems will eventually generate thrombi, embolisms, etc. These are the people who are going to get sick or die from this vaccine, whether they are far from antennas or close to them. And those who are close to antennas will present all kinds of problems: thrombi, neurological problems, tumors, pulmonary problems, cardiac problems such as myocarditis, etc.

3 thoughts on “Are vaccinated people contagious?”