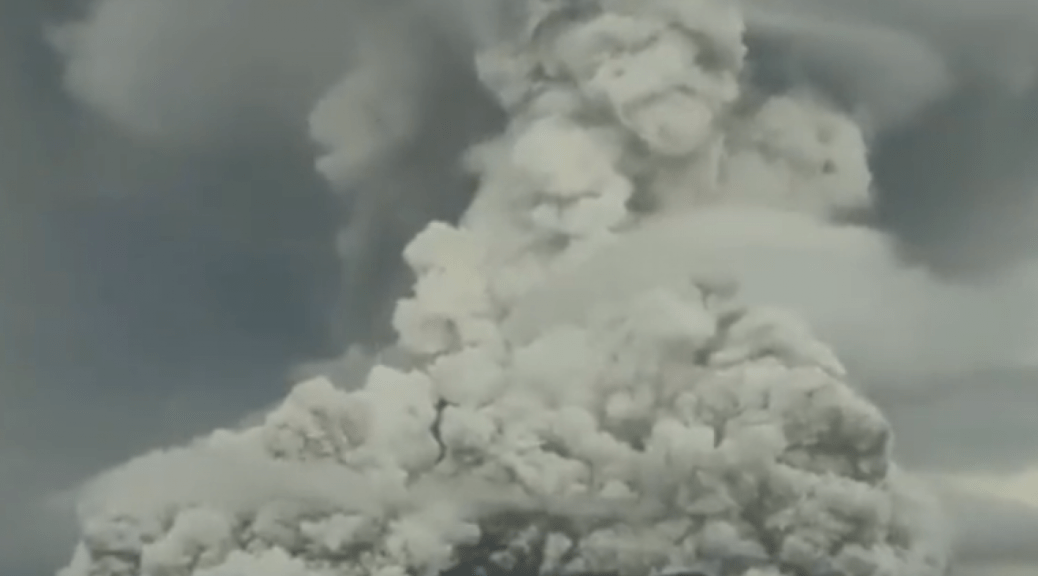 Once again I am left with an uncomfortable feeling that we are not being told the entire truth.

My attention was grabbed when I saw this headline from Hal Turner.

Second Eruption – MUCH MUCH WORSE – At Hunga-Tonga Volcano. Tsunami again?????

A second eruption is now taking place at the Hunga-Tonga volcano in the South Pacific ocean and this one is MUCH MUCH worse than the explosive eruption that took place yesterday; at least double or triple the strength!

Reports are coming in from Tonga that the volcano “exploded” with such ferocious power, “the entire volcanic island has disappeared in pyroclastic flows.”

Then there was this.

BREAKING – This is what I am hearing right now: Eruption smaller than first but it has triggered a lateral undersea landslide – massive displacement of water. Tsunami warning for all east coast Australia, height up to 40 meters in places feared.

I managed to find my way to an item from an Australian new outlet called Ticker News. 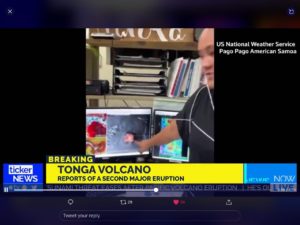 However, when I checked this morning the tweet with this item has been removed.

I saw items from the NY Post and the Daily Mail that had this as a headline but provided very little detail.

A second major eruption has been detected at the Hunga Tonga volcano on Monday, according to an alert from Australia’s Darwin Volcanic Ash Advisory Centre.

There were no casualties reported from the second eruption on Sunday night. However, evacuation measures are underway, Australian outlets reported.

The omissions and censoring leave an uncomfortable feeling that we are not been told the entire truth,

Somehow, citizen journalists seem to be able to provide more details than the media 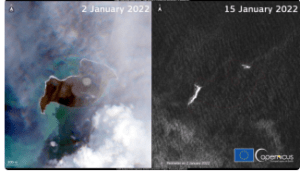 The entire volcanic island has disappeared

Mary Greeley provides a very good background to the whole thing and puts the lamestream media to shame – she actually researches and checks things and if she is unsure says so.

Good footage that you might have to scour the media for.

When the volcano exploded, the island was gone

Just a few items from the NZ media. As usual just reports from talking heads without any useful details.

The eruption of the Hunga-Tonga-Hunga-Ha’apai volcano in Tonga sent literal shock waves around the world.

It’s understood to have been the most explosive eruption in 30 years, and created a larger tsunami than experts thought possible.

Much is still unknown about the eruption, and scientists believe it’s far from over.

But already, it has scientists reviewing the thinking around the impact such a volcanic explosion can cause.

Hunga-Tonga-Hunga-Ha’apai is a very active volcano. Located about 65 kilometres from Tonga’s main island, Tongatapu, Hunga erupted several times in the 20th century, and most recently in 2009, and then again in December 2014 and January 2015.

The most recent eruption began on December 20. The explosion could be heard from 170km away, and a large plume was visible from the Tongan capital, Nuku’alofa.

Activity died down in early January, but kicked off again on January 13, when a large ash column was sent 17km into the atmosphere.

Professor Shane Cronin, a vulcanologist at the University of Auckland, said the power of the eruption was phenomenal.

“From the explosivity, it’s looking like it was one of the most powerful eruptions over from the last thirty years,” Cronin said.

“On the other side of the coin, it’s actually quite a short-lived eruption that only lasted for less than 10 minutes, so the volume of material and volume of magma was not huge on a global scale.”

In terms of explosiveness, Cronin compared the Hunga-Tonga-Hunga-Ha’apai eruption to the 1991 Mount Pinatubo eruption in the Philippines, and the Krakatoa eruption of 1883.

Cronin said that was based on satellite imagery, and reports of where the shock waves and sound waves were felt or heard.

The National Institute of Water and Atmospheric Research (NIWA) believes the major natural disaster centred around Tonga will not contribute to Earth’s temperature cooling significantly.

Hunga-Tonga-Hunga-Ha’apai, a volcano about 30 kilometres south-east of Fonuafo’ou island in Tonga, erupted on Saturday evening, sending walls of tsunami waves through homes and streets. Communication with the Pacific nation has been patchy ever since.

In a statement, NIWA has said that the eruption “is unlikely to have a significant impact on global climate or change the direction of the global temperature trend”.

Jim Salinger remains one of the few scientists worth listening to and he is predicting some hemispheric cooling.

It is possible the Tongan volcanic eruption could lead to a slightly cooler winter and possibly beautiful sunsets in the southern hemisphere this winter.

When a volcano erupts, it releases huge amounts of sulphur dioxide (SO2) into the air, which bounces some of the sun’s radiation away.

Climate scientist Jim Salinger has researched the impacts of major volcanic eruptions, including Pinatubo, on the climate in New Zealand.

He said it was not nearly as large eruption as Pinatubo, and would not have a global impact on the climate, but there could be some local effects in the Southern Hemisphere.

Dr Salinger said it could take a few months to kick in and have cooling of about 0.1 to 0.5 degrees, lasting until spring.

“[In] New Zealand it would mean that it might be just a little bit cooler than normal.”

He said it would be nothing like after the Pinatubo eruption in 1991, when there were some “very cold and horrible winters”.

But one upshot, there could be some wonderful sunsets.

“You get a lot of purple sunsets,” Dr Salinger said.

“And as the material drifts down even lower it eventually falls out, but you get some fabulous purple skies.”

NIWA said early indications from the Tonga eruption did not show extreme levels of SO2 in the stratosphere.

More measurements need to be taken and further eruptions were possible, but it was unlikely to have a significant impact on global climate or change the direction of the global temperature trend.

However, some of the SO2 has been wrapped into Cyclone Cody, east of New Zealand.

SO2 is a toxic, invisible pollutant, so for those in Tonga, this could cause short-term hazards to human health, including acid rain and volcanic smog.