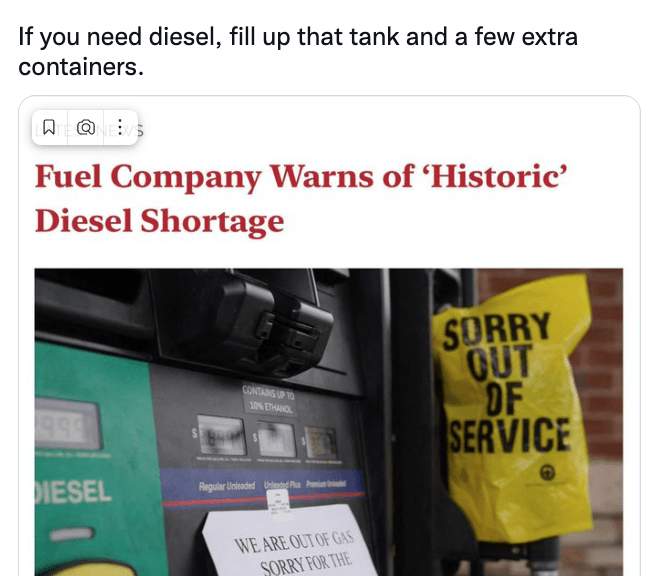 RUMOUR: I have heard this from Multiple sources. Apparently there is just one tanker on route delivering Diesel to us, but none ordered afterwards. Not only NZ either, others are also about to experience a Diesel shortfall. Time will tell

Is this a cover story? The last reports of problems with New Zealand were in June, yet prices of diesel are at par with petrol, yet I have not heard a sniff of a report for help for the trucking industry, let alone the farmers who are being threatened with taxes on methane emission from stock,

Heavy vehicle driver shortages are so dire one trucking company is flying drivers to the South Island each week to cover important routes.

“We’re just scraping through as a nation,” said trucking boss Chris Carr, who was out driving goods himself because his company, Carr and Haslam, was so understaffed.

His comments follow a letter being sent to Immigration Minister Michael Wood from industry heads warning waste collection and public transport services could be “pared back” if changes aren’t made to allow more drivers into the country immediately.

US diesel supplier warns businesses to prepare for shortages, higher prices for consumers

Company suggests being aware of tank levels and not ‘panic buying’ fuel. 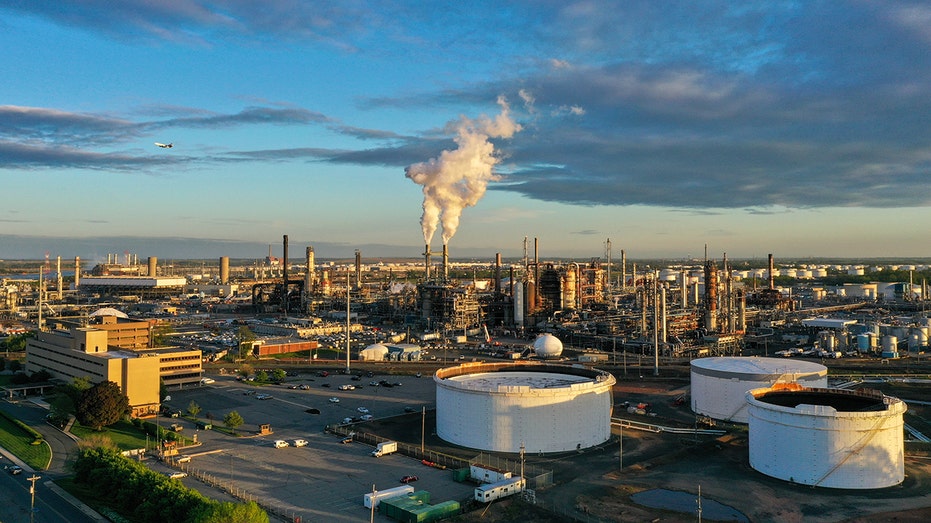 Fuel supplier Mansfield Energy is taking steps to prepare for a diesel shortage on the East Coast of the United States, issuing an advisory to businesses that rely on the fuel to plan rather than panic.

Last week, Mansfield Energy raised a red flag on the upcoming diesel fuel shortage in the southeastern region of the U.S., speculating it could be from “poor pipeline shipping economies” and a historically low supply of reserves.

“A tight diesel supply will force prices to go up, which will eventually make it too expensive for some people,” the company said in a press release on Monday. “High prices will bring demand back down enough that it balances with limited supply.”

Mansfield warned that at the U.S. economy level, consumers may feel pain at the pump, but for businesses that rely on diesel for operations, supply will still be available.

“That is not to say there will not occasionally be situations where there is a true physical lack of products,” the company said. “Some cities might run dry on diesel for a few days, at least at the terminal level. But the fuel supply chain is dynamic, and suppliers will rally to fill in any gaps in supply.”

In preparation for the shortage, Mansfield advised bulk fuel buyers not to panic and order fuel when they do not know whether it will fit in the tanks or not. Fuel should be available by normal means in “most areas,” the company said.

For companies that do not have a large storage tank on site, and instead rely on fueling off location, the fleet could be out of commission of the fuel supplier runs out of fuel.

Mansfield said companies can reduce the risk of being out of commission by issuing emergency fleet cards that give access to fuel in a trackable way or consider installing a small tank for emergency fuel.

“Retail consumers shouldn’t expect to see widespread fuel stations with bags over the pumps,” the company said. “It may happen on a rare occasion (and when it does, you’ll be sure to hear it in the news), but in general retail stations will find supply and stay running. Higher prices will simply get passed on to consumers.”

Supplies of the fuel are at a 14-year low amid a ban on imports from Russia, portending further price spikes
© Getty Images / George Frey

US diesel shortages are spreading along the East Coast amid a ban on imports from Russia, raising fears of further surges in prices for the fuel as consumers brace for the winter heating season.

Mansfield Energy, one of the nation’s major fuel distributors, instituted emergency measures on Tuesday and warned its customers that carriers were being forced to visit multiple terminals in some cases to find supplies, delaying deliveries. With shortages spreading from the Northeast to the Southeast, the company advised customers to give 72-hour notice for their orders to avoid having to pay above-market prices.

“In many areas, actual fuel prices are currently 30-80 cents higher than the posted market average because supply is tight,” said Mansfield, which delivers over three billion gallons of oil products annually. With the relatively low-cost suppliers running out of diesel, distributors are forced to draw from higher-cost sources, resulting in unusually wide spreads in pricing.

Mansfield’s advisory came just six days after US National Economic Council director Brian Deese told Bloomberg News that diesel supplies were “unacceptably low” and that President Joe Biden’s administration had “all options” on the table to reduce prices. However, as Bloomberg and other media outlets have noted, it’s not clear how those options would provide long-term relief.

Diesel supplies in New England, the US region most reliant on distillate fuels for heating, have reportedly dwindled to about one-third of normal levels for this time of year. Nationwide, the US has only 25 days’ worth of diesel supplies, the lowest level since 2008.

Deese told Bloomberg that the US could tap its Northeast Home Heating Oil Reserve, which holds one million barrels of diesel for emergency use. But, as the Washington Post noted, demand for the fuel is so high in the Northeast that those reserves would be depleted in fewer than six hours. The White House has also considered banning or restricting exports of refined fuels – a strategy that industry trade groups claimed would backfire.

“Banning or limiting the export of refined products would likely decrease inventory levels, reduce domestic refining capacity, put upward pressure on consumer fuel prices, and alienate US allies during a time of war,” the American Petroleum Institute and the American Fuel and Petrochemical Manufacturers said earlier this month in a letter to US Secretary of Energy Jennifer Granholm.

The shortages also put the US at risk of further spikes in prices if there’s a supply disruption, such as a refinery breakdown. Higher prices for the fuel would ripple through the US economy because 18-wheelers and other diesel-powered vehicles carry about 70% of the nation’s freight tonnage.

Diesel prices are currently averaging nearly $5.32 per gallon nationwide, down 8.6% from the all-time high set in June, according to the AAA auto club. By comparison, the average gasoline price has dropped 25% from its record high to $3.76 per gallon. Diesel prices are up 47% from a year ago.

Slow Motion Economic Train Wreck; Nearly 40% of small businesses in the US failed to pay rent in October

Small businesses in various states are struggling to pay their rent, a new report shows, with rent delinquency at nearly 40 percent this month.

The findings, published Tuesday by Boston-based business tracker Alignable, are raising more than eyebrows, as they illustrate the stark effect inflation is having on everyday Americans.

The survey of 4,789 randomly selected small business owners saw more than half of respondents say their rent is at least 10 percent higher than six months ago.

If you go back seven months, the majority said their rents had increased by at least 20 percent.

Moreover, the study found that roughly 37 percent of small businesses – almost half of all Americans working in the private sector – were left unable to pay rent in October.

Compounding concerns is the fact that several states, including New York and California, are well over the already-high national average.

Offering an explanation for the phenomenon, study author Chuck Casto wrote that small business owners are steadfast, but that their incomes are ‘basically being eaten away by inflationary pressures’ as grim figures continue to rock financial markets.

Alignable discerned that one-third of businesses are at risk of closing if revenue does not ‘ramp up’ significantly in the coming months, as consumers shy away from spending amid fears of an impending recession.

As to the reasons for the short funds, poll-takers blamed higher rents, the impact of more than a year of high inflation, steeper-than-usual gas prices, increases in supply chain costs, rising labor expenses and shortages, and reduced consumer spending.

Worse, about 49 percent of restaurants were unable to pay their rent this month, up from 36, in September, while an identical 49 percent of car dealership and repair shop owners defaulted on their October rent.