I have no idea how credible this is.

Arrest Order and Warrant issued against Pope Francis by International Court – $10,000 Reward and Amnesty offered to detain Jorge Bergoglio for Crimes against Humanity

The court that forced the resignation of Pope Benedict in 2013 has issued an Arrest Order and Warrant against Pope Francis (Jorge Bergoglio) for Crimes against Humanity, along with a $10,000 reward for his capture.

The International Common Law Court of Justice (ICLCJ) issued the Order and reward today, along with an offer of amnesty from prosecution to any Catholic official or clergy who assists in the detaining of Bergoglio.

A copy of the Order and Warrant follows.

According to the Court statement that accompanied its Order,

“Our Prosecutor has in his possession documented evidence and eyewitness affidavits that attest to Jorge Bergoglio’s personal complicity in child rape, torture and trafficking, ritual killing, medical genocide, obstruction of justice, and a general command responsibility for mass murder and other crimes perpetrated by the Church of Rome … Bergoglio is subject to prosecution as an indictable individual under common and international law, and he will be prosecuted by our Court. We are offering a reward and immunity from prosecution to anyone and especially to any of Bergoglio’s church associates who assist us in detaining and prosecuting him.”

For information and ongoing news of this case see www.murderbydecree.com under ITCCS Updates.

The ICLCJ is a lawful court of record established on January 1, 2012, by the International Tribunal of Crimes of Church and State (ITCCS) 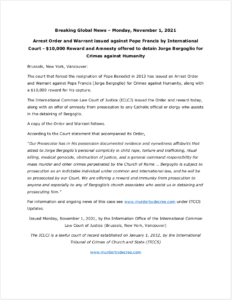