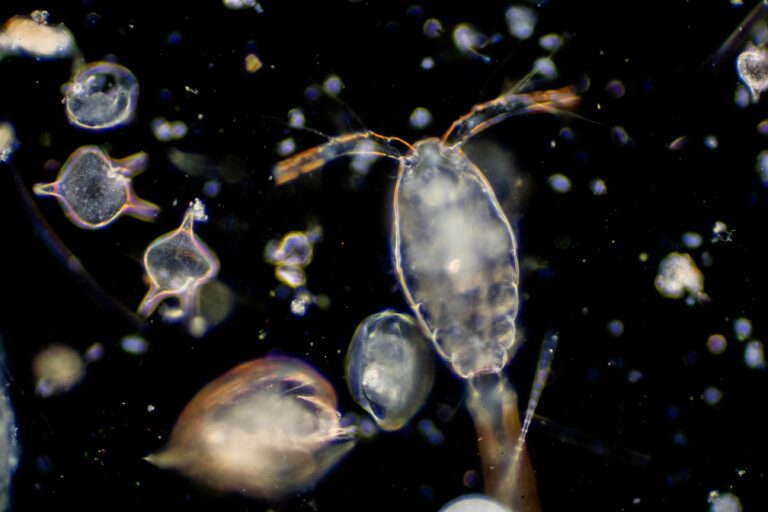 Scientists have discovered a catastrophic loss of life in our oceans… This is really bad. It’s the very bottom of the food chain…

An Edinburgh-based research team fears plankton, the tiny organisms that sustain life in our seas, has all but been wiped out after spending two years collecting water samples from the Atlantic.

The landmark research blames chemical pollution from plastics, farm fertilisers and pharmaceuticals in the water. Previously, it was thought the amount of plankton had halved since the 1940s, but the evidence gathered by the Scots suggest 90% has now vanished.

Protect yourself against dangerous EMP, solar flare and lightnings with EMP Shield, the best protection around…

The scientists warn there are only a few years left before the consequences become catastrophically clear when fish, whales and dolphins become extinct, with grave implications for the planet. In the report, the researchers from the Global Oceanic Environmental Survey Foundation (Goes) state: “An environmental catastrophe is unfolding. We believe humanity could adapt to global warming and extreme weather changes. It is our view that humanity will not survive the extinction of most marine plants and animals.”

The findings have prompted calls for urgent action on a number of fronts as observers warn the promises of Cop26 to ease the climate crisis have, so far, amounted to little.

Fiona Nicholls, an oceans campaigner for Greenpeace UK, said: “Our oceans can be our allies in fighting climate change, but there is simply no time to waste.”

What if all plankton disappeared?

Goes – based at Edinburgh University’s Roslin Innovation Centre in Midlothian – has been collecting samples from the Atlantic and the Caribbean from its yacht, Copepod. Setting out from Scotland, it sailed along French and Portuguese coasts before crossing the Atlantic. The yacht is currently moored in Cartagena, Colombia, before setting sail for Panama this week.

In addition to their own samples, the Goes researchers have provided monitoring equipment to other sailing boat crews so that they can perform the same trawls and report back with their results.

The team, led by marine biologist and former Scottish Government adviser Dr Howard Dryden, has compiled and analysed information from 13 vessels and more than 500 data points.

Now they have alerted the scientific community to their findings and are appealing for the troubling implications to be understood and acted upon before it is too late.

This video shows the role of phytoplankton and why these plant-like organisms play such a crucial role in life on Earth. They fuel ocean life by feeding other plankton, fish, and ultimately bigger creatures:

Plankton is made up of the billions of marine creatures and plants that drift in the currents of oceans and seas. The category covers a huge variety of species, many of them microscopic. However, they are fundamental to life on Earth as they form the bottom rung of the food chain. Plankton is consumed by the krill which are fed on by the fish that, in turn, provide nutrition for terrestrial animals including billions of humans.

But plankton needs the right conditions to thrive, including water that is slightly alkaline. However, the oceans are slowly turning more acidic.

An overload of CO2, along with a deluge of lethal manmade chemicals in cosmetics, plastics, sunscreen, drugs and fertilisers, is inundating the marine environment. This brew is proving toxic to underwater life and once the water reaches a tipping point of acidity, vast amounts of plankton will simply dissolve.

Every year, 18 million tons of heavy oil fuel is spilt into the seas by the shipping industry and breaks up into tiny particles that are toxic to plankton.

Citing previous studies, Goes researchers had been expecting to discover 20 such microscopic specks per litre of Atlantic water – but actually counted between 100 and 1,000.

They expected to find up to five visible pieces of plankton in every 10 litres of water – but found an average of less than one. The discovery suggests that plankton faces complete wipe-out sooner than was expected.

The Goes report concludes: “If we destroy plankton, the planet will become more humid, accelerate climate change, and with no clouds it will also become arid and wind velocities will be extreme.

“Yes, of course, we need to continue to reduce CO2 emissions but even if we were carbon-neutral, it will not stop ocean acidification – it will not stop the loss of all the seals, whales, marine birds, fish and food supply for two billion people.

“CO2 reduction won’t even stop climate change; indeed, we will have catastrophic climate change because we have not fixed the primary root cause – the destruction of nature by toxic chemicals and substances such as plastic.

“We have two choices. We can choose to wake up, understand and address the real issue or choose the game-over button for humanity come 2050.”

From his ongoing mission in Colombia, Dryden – who addressed the Cop26 climate summit in Glasgow last year – told The Sunday Post: “Based on our observations, plankton numbers have already crashed and are now at the levels that I predicted would not happen for another quarter of a century.

“Given that plankton is the life-support system for the planet and humanity cannot survive without it, the result is disturbing. It will be gone in around 25 years. Our results confirmed a 90% reduction in primary productivity in the Atlantic. Effectively, the Atlantic Ocean is now pretty much dead.

“We surveyed the Caribbean from St Lucia to Grenada. Now the only fish available in restaurants there is imported farmed Atlantic salmon.

“It had been reported that 50% of the coral was gone; our observations were that the coral is 100% gone in many locations and 90% gone in all locations.”

Why are plankton the most vital organisms on Earth?

Dryden says the first step for survival is for us all to truly understand the peril our species is in – and then do our bit in saving nature so it can save us.

And everyone – from families, farmers and financiers to scientists and supermarkets, ministers and multinationals – has a part to play.

He explained: “We cannot stop climate change by simply reducing CO2 emissions. However, we can clean up our pollution to give us clean air and clear rivers and bring life back to the oceans. We could potentially live with climate change, but we will not survive the destruction of nature. If we can bring back nature, though, we also solve climate change.”

He said that during the pandemic, because of the lack of tourism, ecosystems had started to recover. Fish have returned and coral reefs have recovered.

Dryden added: “People cause pollution, and in most of the world there is no effluent treatment. Covid has shown us that if we eliminate pollution then ecosystems have high capacity to spring back.”

“We need to tackle the climate and nature emergencies together by transforming both our land and sea use toward a truly sustainable and circular model.

“That includes turning off the tap on all damaging pollutants, both atmospheric and waterborne, and suitably protecting all of our ocean. However, with less than 1% of our seas under high levels of protection, we have a long way to go.”

Earlier this month, at the UN Ocean Conference in Portugal, 150 nations signed a declaration emphasising the importance of conserving the seas. But campaigners say concrete action is now needed at next month’s IGC5 summit in New York, at which negotiators will try to hammer out the wording of a treaty to protect global waters.

Nicholls warned: “If a treaty is not finalised next month, it will be almost impossible to reverse the damage to the world’s oceans.”

Scotland has inflicted terrible damage on its seas, according to the research team’s leader.

Dr Howard Dryden said: “Scotland has already wiped out most of its fish, deep-water coral and polluted most of the coast. Trawling has destroyed seagrass, the loss of which is equivalent to the UK aviation carbon budget. The marine mammals in Scotland are among the most toxic on the planet.

“Scotland could set an example to the rest of the world and declare the country a non-toxic environment. Currently, we have a combined storm water and sewer system, so when it rains the municipal treatment systems are by-passed.

“This means we may only be treating as little as a quarter of our waste water.”

The marine biologist added: “We will not stop making plastic but the new forms should be non-toxic and biodegradable.

“We need to turn to regenerative agriculture. We have already wiped out 80% of all insects and 100% will be gone in 20 years, then agriculture collapses because there is no pollination.”

They are already talking about ocean seeding for a few years now:

A 2020 report found that, every year, 200 million pieces of macroplastics are flushed into the seas around Scotland through its rivers. A further 24.7 billion specks of microplastics also contaminate coastal waters with nearly half of it settling beneath the waves, where it enters the marine food chain.

State-owned Scottish Water is responsible for sewage treatment but admits it cannot monitor or treat all the pollutants in waste water.

Between 2016 and 2021, the equivalent of 47,000 Olympic-sized swimming pools full of untouched waste were discharged into Scotland’s rivers and seas via a network of 3,700 overflow pipes.

So-called tertiary treatment can get rid of more than 90% of the toxins – but is not always fitted. Some of the partially treated sludge is used as farm manure, meaning the pollutants find their way back into the food chain.

In addition, around 150,000 tons of artificial fertilisers are tipped on to Scotland’s fields each year. However, their overuse degrades soils and the excess washes into rivers, eventually adding to ocean acidification.

Stock up on Iodine tablets for the next nuclear disaster…

Regenerative agriculture looks to avoid fertilisers and the pesticides that are devastating bee numbers.

Farmers are finding they can increase their profits by cultivating healthy soils.

Scottish Water has tertiary treatment at 139 waste water treatment plants. But it claimed it could not afford to retrofit the technology across the board and questioned the ecological benefits: “The challenge of protecting our rivers, coastal waters and oceans is one we share with communities.

“Everyone can play a crucial role in preventing sewer blockages, flooding and the risk of debris reaching the marine environment by ensuring they do not flush items containing plastic such as wet wipes down toilets, or dispose of cooking fat down drains.”

Nathan Critchlow-Watton, head of water and planning at the Scottish Environment Protection Agency, said that since 2010, £686 million had been spent on upgrading waste water treatment works and sewer outfalls.

The Scottish Government said: “This year we will publish our refreshed Marine Litter Strategy with an action plan to further reduce sources including macro and microplastics. We also provide financial support to farmers, to help minimise the environmental impact on water quality.” [SundayPost]

Our empty oceans: Scots team’s research finds Atlantic plankton all but wiped out in catastrophic loss of life

Scientists have discovered a catastrophic loss of life in our oceans, we can reveal.

An Edinburgh-based research team fears plankton, the tiny organisms that sustain life in our seas, has all but been wiped out after spending two years collecting water samples from the Atlantic.

The landmark research blames chemical pollution from plastics, farm fertilisers and pharmaceuticals in the water. Previously, it was thought the amount of plankton had halved since the 1940s, but the evidence gathered by the Scots suggest 90% has now vanished.

The scientists warn there are only a few years left before the consequences become catastrophically clear when fish, whales and dolphins become extinct, with grave implications for the planet. In the report, the researchers from the Global Oceanic Environmental Survey Foundation (Goes) state: “An environmental catastrophe is unfolding. We believe humanity could adapt to global warming and extreme weather changes. It is our view that humanity will not survive the extinction of most marine plants and animals.”