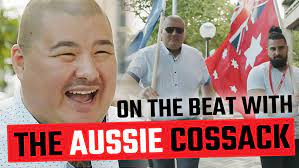 Aussie Cossack arrested and thrown in NSW caboose for 6 weeks

Simeon Boikov AKA Aussie Cossack was remanded in custody by a Magistrate at the Burwood Magistrates Court in Sydney on Thursday May 19, 2022.

So far Cairns News has not been able to discover what offence he committed if any and the charges he faces.

It is time we got some lawyers in the Commonwealth who know the law as well as they know the Judges and Magistrates. The Police Prosecutor and the lawyer for Simeon Boikov put the Magistrate and Police in harms way because since 2002 S 268:12 Criminal Code Act 1995 (CTH) has been doubtful among the Laws of the Commonwealth and it gives sharks teeth to the International Covenant on Civil and Political Rights because it makes a breach of Article 9 and 14 of the International Covenant on Civil and Political Rights a serious indictable offence carrying seventeen years imprisonment.

Simeon Boikov is being persecuted as a larrikan.

Attempts by various people to use those forms have so far been frustrated by people who call themselves Judicial Registrars and one has yet to be accepted. In point of fact the use of such forms on behalf of Simeon Boikov  would mean that a form of Habeas Corpus exercised by the Federal Court of Australia  has been  created that attracts no filing fee whatsoever as the accused would have to prove to the Federal Court of Australia  the detention was not arbitrary.

Further the common law declared in S 4B and S4J Crimes Act 1914 (Cth)  provides a formula for converting a Commonwealth term of imprisonment into a pecuniary penalty. The pecuniary penalty for the State of New South Wales for having its agent the Magistrate and its Police Service for seventeen years imprisonment for the Body Corporate that is the State of New South Wales is $1,070,000 for each offence. The Magistrate personally could be liable for $214,000 for each offence. So too the Police Prosecutor. As the aggrieved person Simeon Boikov would be entitled to those sums for every day he is confined by reference to S 4K Crimes Act 1914 (Cth).

So where do we get a lawyer to check this out and trot down to the Federal Court of Australia and get Simeon Boikov out of jail and handsomely compensated for his inconvenience? Where are the Bar Association and Law Society when you really need them?

The following is an update:

‼️Talked to Simeon for 7 minutes today

❌They don’t even let him go out for exercise

‼️Daily psychological abuse: every day a doctor comes into the cell with a syringe and pressuring him to take the vax

‼️Simeon refused, refuses and will refuse any kind of coercion

‼️Simeon thanks everyone for ongoing support, his arrest and imprisonment are illegal and responsible organisations will be sued

The Aussie Cossack has a serious matter listed for sentencing on 30 June 2022. His legal team and Queens Counsel Barrister are fighting to achieve the best possible outcome.

Aussie Cossack is currently remanded in custody in segregation and has been declared a national security interest.

A big THANK YOU to everyone for your ongoing support! It means a great deal!

Lets get together to ensure he is released from custody!