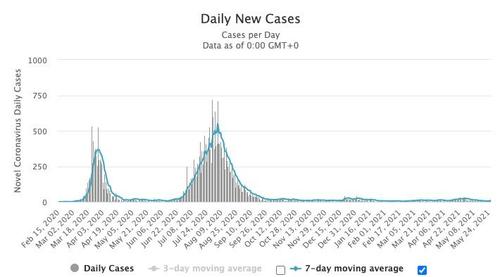 Another 10K people have reportedly had some form of contact with those infected.

“Unless something changes, this will be increasingly uncontrollable,” Victoria Acting Premier James Merlino said.

Australia’s federal goverment declared Melbourne a hot spot, allowing the city to tap additional federal resources. PM Scott Morrison said 218 military personnel would be dispatched to Victoria to help administer vaccine doses to the population. Additional doses have been sent to Victoria, where only 3.9MM doses have been administered so far among a population of 26MM.

Health Minister Greg Hunt described the lockdown, which begins at midnight, as “highly regrettable, but necessary restrictions under the current circumstances.”

Under the terms of the strict lockdown, people will only be able to leave home to shop for food and essential items, provide or receive care, exercise, work or study if they are unable to do so from home, and to get vaccinated. Masks will be compulsory indoors and outdoors.

Cafes and restaurants will only be able to sell takeout, and schools will close once again, reverting to all-remote instruction for the duration of the lockdown. Professional sports events in Melbourne will continue, but crowds won’t be allowed.

Raising the sense of alarm, Australian authorities said the variant that caused the latest outbreak is the same one first identified in Inda, which has made its way across Europe and the US by now. Australia’s Chief Medical Officer Paul Kelly confirmed that it was the Indian variant designated as a “variant of concern” by the WHO.

The new Melbourne cluster was found after a traveler from India became infected while in hotel quarantine in South Australia state earlier this month. The traveler was not diagnosed until he returned home from Adelaide to Melbourne.

The city of 5MM people became Australia’s biggest hot spot for the first time last year when infections peaked at 725 new cases in a single day in August at a time when community spread had been virtually eliminated elsewhere in the country.