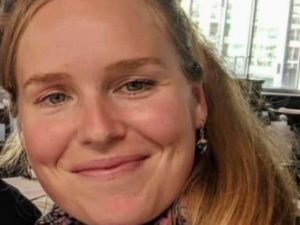 Anti-lockdown campaigner Monica Smit is currently a political prisoner in the People’s Republic of DanAndrewstan, otherwise known as Victoria.

Earlier today, I spoke with both Ms Smit’s partner and also her lawyer who informed me of this news.

She has been charged with a claim of “incitement” and allegedly breaching the CHO directives for posting remarks online in that were in opposition to the Victorian Labor Government’s lockdown regime.

In order to secure bail, the authorities demanded that she not only shut down her political organisation Reignite Democracy Australia and all of its associated websites and social media accounts but they also demanded that she not continue to “incite” opposition to the Victorian Labor Government’s lockdown regime which would likely mean she is not able to express her opposition to the Andrews’ lockdown regime publicly.

It should be noted that Reignite Democracy Australia has an application before the electoral commission to become a political party.

Ms Smit’s imprisonment and her bail conditions are a clear breach of the implied constitutional freedom of political communication.

And just as this freedom is being undermined in Victoria, so too is the public trust and respect for the police when VicPol is arresting and prosecuting political campaigners like Ms Smit.

I call on Ms Smit to be released from jail without these outrageous limitations on her political rights and for the police to withdraw the politically-motivated charges against her and to refrain from further political arrests and prosecutions.

– spread her story far and wide

An Australian woman advocated freedom. Freedom from lockdowns and mandates. So she was criticized on social media? She was censored?

Her name is Monica Smit. She’s sitting in jail.

The authorities agreed to release her on bail, if she renounced everything she stood for.

Does that sound familiar? The USSR. Show trials. The massive power of the State coming down on an individual.

Here are the details.

The Age, September 1, 2021: “A woman charged with incitement and accused of urging people to attend anti-lockdown protests remains in custody despite being granted bail, because she has refused to agree to conditions imposed by a magistrate.”

[Incitement? Is that what demanding freedom now means? In Australia, yes.]

“Monica Smit, the founder of activist group Reignite Democracy Australia – which opposes the Victorian government’s handling of the COVID-19 pandemic – remained in custody at a Melbourne police station on Wednesday over her refusal to sign a bail consent form.”

“Ms Smit was granted bail on two charges of incitement and three of breaching the Chief Health Officer’s directions, but after a 10-minute conversation with her lawyer to clarify the conditions she had to accept to get bail, defence counsel Marcel White told Melbourne Magistrates Court the 33-year-old did not want to sign the consent form.”

“Magistrate Luisa Bazzani responded: “’It’s a matter for her. I am not about to sweet talk her into bail if she wants to stay in custody’.”

[Monica Smit doesn’t want to stay in custody. She wants to keep her right to advocate for freedom in Australia.]

“Ms Smit was arrested on Tuesday and was to stay in custody at Dandenong police station on Wednesday night. The only way she could be released on bail was by agreeing to the magistrate’s conditions and signing the consent form, or by taking her bail application to a higher court.”

“Prosecutor Anthony Albore said Ms Smit used the messaging app Telegram to encourage people to attend the protests. Ms Smit’s group has 18,000 followers on Telegram, the prosecutor said, as well as 67,000 followers on Facebook and an email list of 63,000 people.”

“Court documents state that in the lead-up to the August 11 protest, Ms Smit posted that ‘lockdowns take lives’ and urged people to demonstrate.”

“She [Smit] also posted numerous messages before the August 21 protest, the documents allege, including: ‘The more they lock us up, the more people will have nothing left to lose … and that’s when Australia stands up!’”

“Other posts encouraged people to wear masks while travelling to the protest but to take them off once in central Melbourne. Another message said: ‘Stand up Melbourne’.”

“Prosecutors did not oppose Ms Smit getting bail as long as it was subject to conditions.”

“After legal argument over the conditions, Ms Bazzani ruled that if Ms Smit was to get bail she had to abide by a 7pm curfew, abide by the Chief Health Officer’s directions and not incite anyone to breach those directions or publish anything that might incite breaches. She also had to remove any material previously published online that might incite people, not attend protests, and had to wear a mask when outdoors unless she had a medical exemption.”

One thought on “Australia: Monica Smit arrested for advocating freedom; she refuses bail”