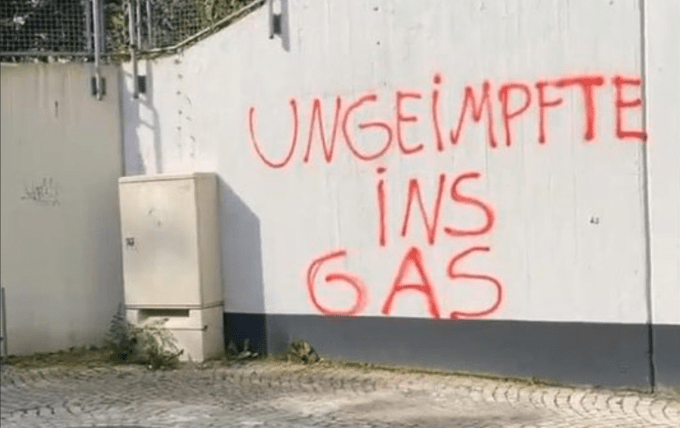 NSW Australia Tightens It’s Tyrannical Grip, & It’s Coming To All Of Us

DYSTOPIAN: Aussie Forcibly Hauled Off To Insane Asylum For Covid Thoughtcrime. His WIFE Reported It

Police forcefully evict man from own home due to Covid

Premier Mark McGowan has told Sky News he is ‘not afraid’ to implement mandatory vaccination for certain industries in Western Australia.

WE ARE AT A CROSSROADS – MAX IGAN – ANARCHAST 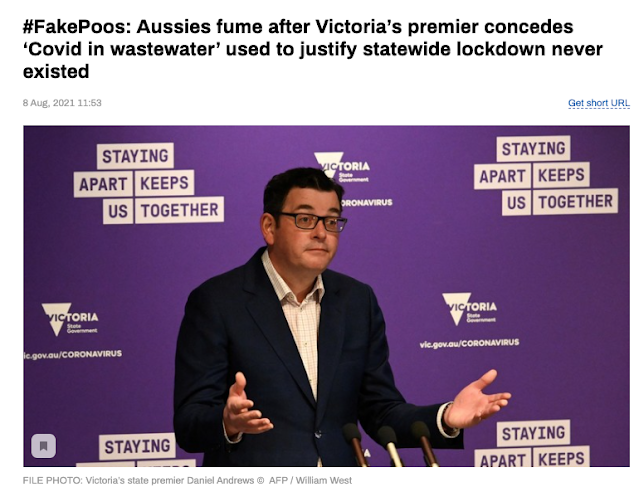 RT,
8 August, 2021
Australians are airing their grievances with Victoria Premier Dan Andrews after he admitted he cited non-existent coronavirus-tainted sewage in his decision to lock down the state.

Andrews announced a seven-day statewide shut down on August 5 in response to the “wastewater detection” of Covid-19 in Wangaratta, a rural city about 236km (147 miles) from Melbourne. The discovery creates the “potential that regional Victorians have been exposed to Covid-19,” Andrews explained. The decision to widen restrictions to include the whole state was designed to “keep regional Victoria safe,” the premier added.

The order means that, apart from emergencies and grocery shopping, Victoria’s citizens are required to remain at home. Public gatherings are prohibited, with people only able to meet one person in their social circle. Educational institutions will also revert to online teaching.

Australians soon began to vent on social media about Andrews’ debunked coronavirus sewage. By Friday afternoon, “#FakePoos” was trending, with countless tweets calling out the premier for locking up the entire state on specious grounds….

But on 15 August it has been announced that Melbourne is going into its SIXTH lockdown and the lies about #FakePoos are still being repeated in the report below.
Facts don’t matter in fascist Australia.
Melbourne’s sixth lockdown set to be extended beyond Friday

Similarly in New Zealand. There were rumours of an imminent lockdown that did not happen as predicted.

But the government DID give out dire signals of a lockdown.

Chris Hipkins has issued a stark warning to New Zealanders, saying they should plan for further lockdowns if Delta variant is found here.

On Wednesday the Minister for the COVID-19 response said the pandemic is far from over, with cases overseas continuing to rise.

He says if the Delta variant were to come to New Zealand, the Government would react as it has in the past – swiftly, and with heavy restrictions.

COVID-19 vaccination ‘not a magic bullet’, other forms of protection will still be needed – Ardern

“In the event we discovered Delta we would move to alert level 4…we maintain the best economic response is a strong public health response, and a short sharp lockdown is likely to be more successful [than a longer, less restricted one].”

Hipkins warned any future lockdowns would be announced with very little notice and urged New Zealanders to have a plan.

“My message to all New Zealanders is this is not over we are still going to be dealing with this for some time to come.”

A self-proclaimed “mystic” who predicted New Zealand would be plunged into lockdown for “a couple of weeks” this month has fallen short with his prophecy, and now experts are rebuking the popular TikToker for fuelling reliance on untrustworthy information.The supposed psychic, who goes by the name of ‘Mystic W’, has amassed more than 1.4 million followers and 21.3 million likes on the video-sharing platform TikTok. Popularised by his predictions, which he claims come to him as visions in his dreams, Mystic W recently foretold that New Zealand would enter a two-week lockdown from August 10 to August 23, with community cases emerging on August 8 or 9.

Having announced that a lockdown was on the cards the government had to stomp on the rumours because otherwise it would mean that the government would not be in charge of the narrative.

The Ministry of Health has been forced to assure New Zealanders there is no merit to rumours circulating that the country is about to head into a COVID-19 lockdown.

In a late-night post to Facebook on Thursday, the ministry stated Healthline was “reporting many rumours relating to COVID-19 and lockdowns circulating”.

“None of the reported rumours are true. There are currently no community cases of COVID-19 or any imminent lockdowns.”

Welcome to #NewNormal Germany. The graffiti reads … “GAS THE UNVACCINATED.” 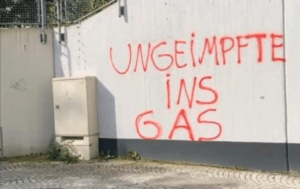