Here i some of the latest from Australia testifying to the descent of Australia (and New Zealand) into fascist tyranny.

AUSTRALIA IS UNDER ATTACK – Max Igan

The actions of the state in Australia are making the United Kingdom’s current dystopian reality look like paradise in comparison. Australians are currently living under one of the most ridiculous dictatorial regimes in the world, second only to New Zealand where Prime Minister Jacinda Ardern has locked down the entire country due to a single positive test result for the Covid-19 virus.
The State of New South Wales in Australia is currently in lockdown despite just 113 alleged Covid-19 deaths occurring in the past 18 months which is 0.001% of the entire population of the state.
There are currently just 7,338 active cases which is 0.08% of the entire population, and the residents of New South Wales are being subjected to thousands of dollars in fines if they dare to breach stay at home quarantine, lie to a contact tracer, stray over 5km from their home without a permit, or venture outdoors without partaking in actual exercise, and the military is on the streets to ensure they comply.
Meanwhile the State of Victoria in Australia has ridiculous rules such as a ban on removing face masks outside to drink alcohol have been put in place.
A permit is required to leave home to go to work, construction sites must reduce staffing levels to 25%, and a curfew is currently in force.
ll of this has been put in place in response to 205 alleged active cases of Covid-19; 0.003% of the population, and 5 people being in hospital with Covid-19; 0.00007% of the population.
Now footage has emerged showing that the state in Australia is also removing people from their homes under the pretense of being a “danger to public health”, and forcing them to quarantine in designated hotels.You can watch the incident in the video below…

Video footage is now circulating of police in Australia actually attacking young children for simply not wearing masks, throwing them on the ground to cuff them, and even pepper-spraying a 12-year-old girl.

And amazingly, several of the police themselves are not even wearing masks! Watch the footage in this video report I put together.

It starts out fairly quietly with a young girl explaining that her sister had just been arrested for not wearing a mask, but then more police arrive and the situation quickly deteriorates into chaos – thanks to the police.

I have to admit that my blood was boiling as I watched these big brawny men fully armed throw around young harmless children.

If this is what it takes for you to feel like a man, then you’re no man at all! You’re a worm that needs to be stepped on and squashed!

‘All hail Gladys’: Students at Sydney’s stadium vaccination hub are creeped out by giant screens showing Gladys Berejiklian
–A student receiving  Covid vaccine has shown what the inside of the hub is like
-TikTok shows a giant screen with Premier Gladys Berejiklian addressing students
-Many have commented how odd and creepy the video looks, likening it to a cult
-The hub at Qudos Bank Arena is set to vaccinate thousands of students 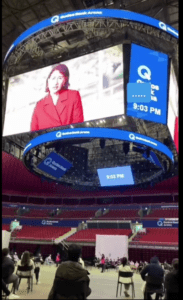