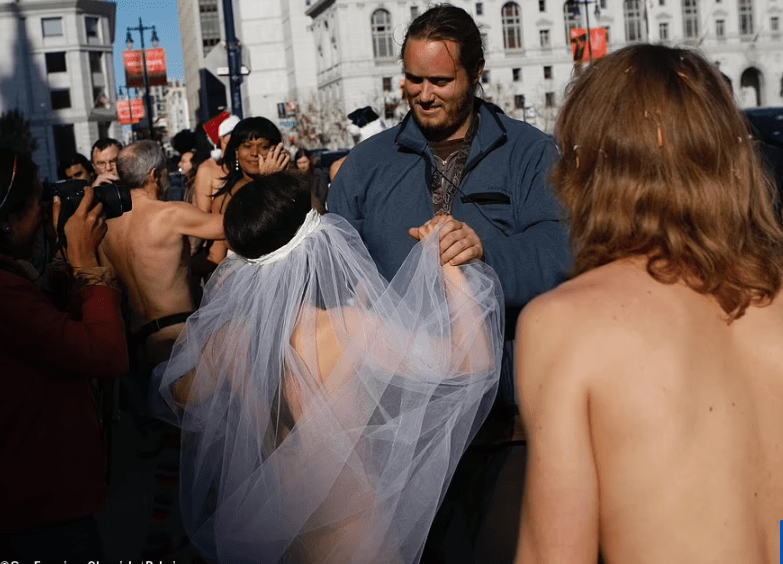 This morning at about 2.20 am, Paul, husband of Speaker Nancy Pelosi was reported beaten with a hammer and has had to have brain surgery.

The official narrative says that the alleged attacker, David Depape, broke in via a sliding glass door and when the police arrived they found the two men fighting over a hammer and presumably, with the police in attendance Mr Depape wrestled the hammer from Mr. Pelosi and hit him over the world.

Meanwhile, Hal Turner has ascertained the Pelosis live in a gated community with its own security.

Both men were discovered in their underwear. It also turns out that both men knew each other as is borne out by police radio.

Update (1500ET): A look at the blog of David Depape, the Berkeley man accused of attacking Paul Pelosi with a hammer, reveals that Depape made several religious-based posts in 2007. Then, it sat dormant for 15 years, after which he began posting in late August. The new material features YouTube videos, memes and odd headlines with no commentary attached.

So in Pelosi’s house in his underwear, alone with her husband while she was away… https://t.co/r4ouRl2AoU

As far as ideology – Depape’s activities and postings don’t provide a clear picture.

They are really trying to pass this guy off as MAGA.

Suspect, on the same day last week he urged Trump to make Tulsi Gabbard his VP nominee, posted a photo of a gas chamber, pic.twitter.com/U284xrfe7N

People are rushing to describe the suspect in the Pelosi attack as politically motivated, but the evidence so far suggests that he suffered from serious mental illness and drug addiction and lacked any coherent political ideologyhttps://t.co/0tKZwACaBA

Update (1330ET): While we wait for the SFPD press conference (scroll down for live feed), the suspect in Paul Pelosi’s attack has been identified as 42-year-old David Depape, possibly of Berkeley, according to the SF Chronicle and WSJ.

San Francisco Police confirm that the suspect in the Pelosi attack is David Depape. pic.twitter.com/lOORNrP5zi

VIDEO: Over the home of Speaker Nancy Pelosi – shows a shattered window – where the suspect who broke into the home and attacked Paul Pelosi may have gotten in.
Story here: https://t.co/cc78vzvAkQ@KPIXtv #kpix #NancyPelosi pic.twitter.com/Y7nfbwoEnq

Depape will reportedly be charged with attempted homicide.

Here’s what we know:

• The assailant used a hammer and targeted the Pelosi home in San Francisco.
• A suspect has been identified as David Depape, possibly of Berkeley.
• Paul Pelosi was hospitalized and is expected to make a full recovery.

The suspected attacker has espoused extreme right wing views on social media, including conspiracy theories about Covid-19, according to one of the law enforcement officials. W/ ⁦@nataliewsj⁩ ⁦@ZushaElinson⁩ https://t.co/xmd6ryr3rQ

Meanwhile, Pelosi is reportedly undergoing brain surgery following the attack, and has suffered bruising, severe swelling and other injuries.

Can we take a moment to appreciate how the “YOU DONT NEED A GUN TO STOP A HOME INVASION” folks literally had a home invader wrestle their own hammer off them to use against them. pic.twitter.com/V7hRi1MmwQ

Update (1310ET): The San Francisco Police are holding a press conference to discuss the attack.

Update (1223ET): More details are trickling in from the Paul Pelosi’s assault.

Huge breaking news: The assailant who attacked Paul Pelosi in his San Francisco home reportedly shouted “Where is Nancy, where is Nancy?” before attacking him with a hammer, per CNN’s @jamiegangel. pic.twitter.com/rCz29daWAO

AP also reports that Pelosi suffered blunt force injuries to his head and body, and that the yet-to-be-identified assailant used a hammer, according to law enforcement sources.

Meanwhile, Capitol Police have obtained video of the attack according to CNN, and may ramp up protection for lawmakers’ families.

And according to a statement by the US Capitol Police, “Special Agents with the USCP’s California Field Office quickly arrived on scene, while a team of investigators from the Department’s Threat Assessment Section was simultaneously dispatched from the East Coast to assist the FBI and the San Francisco Police with a joint investigation.”

The USCP, FBI and SF Police are launching a joint investigation into the break-in.

Paul Pelosi, the husband of House Speaker Nancy Pelosi was violently assaulted after someone broke into their San Francisco home overnight.

“Early this morning, an assailant broke into the Pelosi residence in San Francisco and violently assaulted Mr. Pelosi,” reads a statement on the Speaker’s website from spokesman Drew Hammill.

“The assailant is in custody and the motivation for the attack is under investigation. Mr. Pelosi was taken to the hospital, where he is receiving excellent medical care and is expected to make a full recovery. The Speaker was not in San Francisco at the time.“

The left, of course, has already started blaming Republicans for the home invasion in [checks notes] crime-ridden San Francisco.

It’s always the Pharisees who most loudly wear their godliness who project their vile and violent lies and fantasies onto the rest of us.

We know who are the truly virtuous.

And who are anything but. https://t.co/dmMOhDgYmn

This is extremely irresponsible of you. You have no clue what the motivation of the attacker was. Crime is through the roof in San Francisco just like it is in all Democrat run cities. Do I need to remind you how Rand Paul was beaten? How Steve Scalise was shot? I can keep going. https://t.co/iKArG9Nqtq

Or, maybe it was linked to Nancy Pelosi’s high-profile visit to Taiwan, widely considered a provocation?

This isn’t the first time the Pelosis have come under attack in San Francisco. In 2021, vandals spray painted their house and left a severed pig’s head in front of their garage.

Meanwhile, this just hasn’t been Paul Pelosi’s year – having been busted for a DUI (for which he avoided jail time). He’s also been on a bit of a cold streak investment-wise, coinciding with national attention on the Pelosis’ years-long hot streak.

Would Paul have been safer if he’d gone to jail for that DUI?

Paul Pelosi was too drunk to even walk. He could’ve seriously hurt someone. Here’s his DUI video. pic.twitter.com/G1XaD8LkEY

One thought on “Behind the attack on Paul Pelosi”