Joe Biden appears to be getting worse. 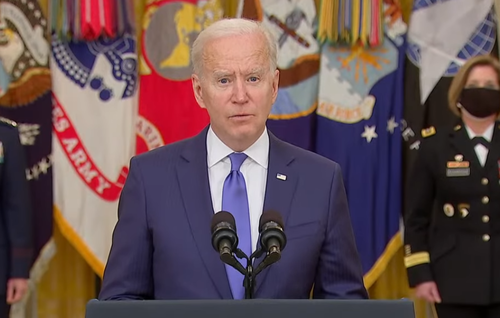 After bumbling through a public appearance last week – at one point mumbling “What am I doing here?” while forgetting the names of key Democrats, the President of the United States on Monday couldn’t remember the name of the Pentagon, or his own Secretary of Defense, Lloyd Austin – who spoke minutes before Biden took the stage to offer remarks during International Women’s Day.

Here’s a very confused Biden on March 1st asking what he’s doing there:

On Monday, the Washington Post noted that Vice President Kamala Harris is taking an “unusually large role” in shaping Biden’s foreign policy – having spoken with six world leaders independently of Biden, and was a “vocal participant in deliberations over how to respond to Iran-backed militias’ attacks on U.S. forces in Iraq, as well as whether to sanction Saudi Crown Prince Mohammed bin Salman for the killing of journalist Jamal Khashoggi,” according to the White House.

Of course, both Biden and Harris did refer to the “Harris administration” on more than one occasion during the 2020 election.

In late February, dozens of House Democrats asked Biden to relinquish sole authority to use nuclear weapons, since “The military is obligated to carry out the order if they assess it is legal under the laws of war,” should Biden – or a future president – choose to launch nukes without consulting advisers.

Two weeks later, a bipartisan group of Senators introduced legislation which would strip Biden of the ability to launch military operations without first seeking congressional approval after Biden bombed Syria.

Former Clinton insider Dick Morris predicted that Democrats will invoke the 25th Amendment on Biden “So that a strike could not be launched without consulting with his Cabinet or with leaders of Congress, something that no president has been asked to do in 76 years since we’ve had the bomb,” adding “I think both of those indicate that the Democrats have in the back of their minds, and increasingly towards the front of their minds, moving to oust Biden under the 25th Amendment.”

Amazing, considering Biden received the most votes in history.

President Joe Biden forgot the name of his defense secretary yesterday (Lloyd Austin), as well as where Austin works (the Pentagon). The other day, his handlers abruptly cut his video rather than let him answer questions from his fellow Democratic elected officials.

His team won’t allow him to host a press conference, even knowing that the White House press team couldn’t be friendlier to the man who replaced the man who drove them crazy with rage. The septuagenarian just struggles with communication, as he did in his gloomy speech a couple of weeks ago about how many Americans died from the coronavirus, or when trying to defend his bill to bail out Democratic strongholds in the name of COVID relief:

It doesn’t take much for the nation’s voters to become concerned that President Biden, the oldest new chief executive at 78 years old, might not be up for the job.

The latest proof: His resistance to holding a full-blown press conference now 49 days into his presidency has half the country worried.

In the latest Rasmussen Reports survey of likely voters, 50% said they are not confident that “Joe Biden is physically and mentally up to the job of being president of the United States.” Another 48% have confidence in Biden, though only 34% were “very confident” that he was up to the job.

Driving that, Rasmussen said, was Biden’s refusal to meet with reporters. He has had some interactions with the small pool of reporters, but his sometimes awkward speaking style has led to criticism. And the White House has recently cut short his appearances.

Rasmussen said today 52% of likely voters are concerned that he hasn’t held a press conference and that 46% aren’t.