Update(4:30pmET): The State Department on Saturday updated its advisory for American citizens in Russia, urging them to leave “immediately”. It comes after a prior notification from the embassy on Wednesday which advised that they should “consider” exiting the country.

Below are the opening paragraphs the State Department’s new travel warning, coming the same day it was revealed that American WNBA and former Olympic star Brittney Griner was detained at Sherematyevo International outside Moscow [emphasis in original travel warning]:

Do not travel to Russia due to the unprovoked and unjustified attack by Russian military forces in Ukraine, the potential for harassment against U.S. citizens by Russian government security officials, the Embassy’s limited ability to assist U.S. citizens in Russia, COVID-19 and related entry restrictions, terrorism, limited flights into and out of Russia, and the arbitrary enforcement of local law.  U.S. citizens should depart Russia immediately.

U.S. citizens residing or traveling in Russia should depart immediately.  Limited commercial flight options are still available.  Overland routes by car and bus are also still open.  If you wish to depart Russia, you should make arrangements on your own as soon as possible.  If you plan to stay in Russia, understand the U.S. Embassy has severe limitations on its ability to assist U.S. citizens, and conditions, including transportation options, may change suddenly.  U.S. citizens who are able to depart Russia for another country and are in need of emergency assistance upon arrival may contact a U.S. embassy or consulate in that country.

Griner is accused of having drugs on her possession, and it’s believed she’s already been in Russian custody for a number of days.

The US advisory also warns US citizens of the impact of sanctions and restricted Russian airline travel across Europe and into the US, saying they “should note that some credit and debit cards may be declined as a result of sanctions imposed on Russian banks.  Also, there are some reports of cash shortages within Russia. U.S. citizens should make an alternative plan for access to money and finances if remaining in Russia.”

The war-footing rhetoric between Moscow and Washington is also growing hotter, with Vladimir Putin in a Saturday speech warning that any country contemplating a no-fly zone in Ukraine would be met with an immediate declaration of war by Russia.

More and more battlefield footage has emerged from Ukraine in the past two days showing Russian aircraft shootdowns, suggesting that its air force may be taking a harder hit than the Kremlin expected.

Update(10:21amET): Ukraine’s President Zelensky and his top officials have over the past days been very openly urging a US and NATO imposed no-fly zone over the country, which would effectively bring American forces into a direct shooting war with Russia. On Saturday Russian President Putin issued a stern threat to any external power thinking about intervening by sending direct military forces.

Putin made clear a no-fly zone would result in the Kremlin’s immediate declaration of war on any country intervening in such a way. The AP reported and translated his fresh comments made before civilian aviation industry members and pilots as follows:

A no-fly-zone would spell war for any third party who tries to enforce one over Ukraine, Vladimir Putin has said.

Speaking at a meeting with female pilots on Saturday, Putin said Russia would view “any move in this direction” as an intervention that “will pose a threat to our service members.”

“That very second, we will view them as participants of the military conflict, and it would not matter what members they are,” the Russian president said.

Further he addressed the ratcheted up sanctions on Russia from the West, which are now serving to isolate Russia almost on levels akin to the US sanctions regimen on Iran – with of course the important exception that the US has not yet directly targeted Russian oil and gas exports.

“Sanctions against us are like declaring war on Russia,” Putin said additionally in the meeting with military members.

He further painted a positive picture of Russia’s strategy and military operations on the ground, at a moment many Western officials and pundits in the media have pointed out major problems for the invaders as Ukraine mounts a fierce ground resistance…

The second round of Ukraine-Russia talks which took place Thursday reached a key agreement to allow for the evacuation of civilians in areas of Ukraine seeing intense fighting by establishing ‘humanitarian corridors’. With a third round of talks agreed upon to take place at the start of next week, the potential for local ceasefires sparked hope that this could lead to a broader ceasefire over the country.

These corridors were erected in at least two major cities which have been under bombardment by Russia – Mariupol in the southeast on the Sea of Azov, and the eastern city of Volnovakha. The local ceasefires were seen as a significant breakthrough which could lead to a wider pause in fighting, but that appears to have already broken down, after civilians in a city of some 400,000 were only given five hours to exit Mariupol on Saturday.

Shelling by Russian forces has reportedly since resumed, with the brief ceasefire now effectively over. President Zelensky’s office issued a statement blaming Russia for breaking the deal: “The Russian side is not holding to the cease-fire and has continued firing on Mariupol itself and on its surrounding area,” it said.

The ceasefire for allowing the exit of civilians in Volnovakha has also reportedly broken down. “Talks with the Russian Federation are ongoing regarding setting up a cease-fire and ensuring a safe humanitarian corridor,” the statement by Zelesnky’s office indicated.

Additionally Deputy Prime Minister Iryna Vereshchuk said, “We appeal to the Russian side to stop firing,” according to the AP. Mariupol had prior to the humanitarian pause been under continuous shelling for some 30 hours, according to international reports.

Likely Russia sees the 5-hour ceasefire as having been sufficient time to allow for civilian evacuations. Mariupol has been described as under complete siege, and with no water or electricity. Given it’s a city of some 400,000 – it’s more than likely that many thousands of civilians remain there as the shelling resumes.

City authorities have said they believe at least 200 civilians have been killed since the start of the attack on Mariupol.

Meanwhile Germany has issued new numbers after the United Nations previously reported that over 1 million Ukrainians have fled the war. “More than 27,000 refugees have arrived in Germany from Ukraine since the beginning of the Russian invasion on Feb. 24, according to Germany’s interior ministry,” CNN reports. “Germany’s Federal Police has registered 27,491 refugees from Ukraine in Germany to date, an interior ministry spokesperson confirmed to CNN Saturday.”

Hal Turner is reporting the following. I think I picked this up somewhere else

The men met for about three hours and their meeting ended about 7:50 PM local Moscow time.  (Moscow is eight hours ahead of the US east coast.)   [HT Observation: a Religious One making a trip on Shabbat? Something big is coming]

Shortly after that meeting, the Israeli Foreign Ministry issued a notice urging all Israeli citizens to leave Russia immediately. 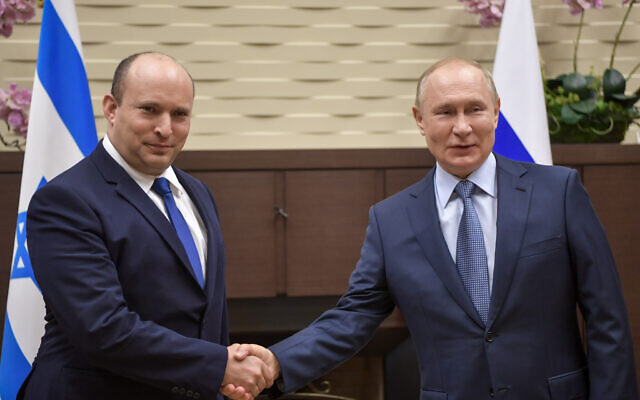 Prime Minister Naftali Bennett traveled to Moscow on Saturday for a meeting with Russian President Vladimir Putin to discuss the war in Ukraine.

The meeting at the Kremlin lasted for 3 hours.

“The prime minister took off for Moscow early this morning, after the conversation between the leaders last Wednesday,” the Prime Minister’s Office said in a statement

From there he flew on to Berlin

Bennett lands in Berlin after Moscow trip, will meet soon with German chancellor