When I was in London 12 years ago I noticed that in many places people have to go DOWNSTAIRS, below ground level to get access to their flats.

Londoners were left battling ‘biblical storms’ last night as flash floods hit the capital and left a trail of destruction across the city, with rescue teams evacuating properties amid fears of collapsing ceilings and several tube stations forced to close.

Flood waters poured through the streets of Portobello Road in Notting Hill after nearly three inches of rain hit the capital in just 90 minutes and in Raynes Park, south London, cars were left abandoned in around 2ft of water after torrential downpours caused travel chaos and left homes and businesses flooded.

Meanwhile in Turnpike Lane, north London, people were spotted wading through the water in the streets as the heavy rain pelted down and flooded the roads.

In other scenes, Sloane Square tube station in Chelsea was forced to shut down after fast flowing water poured down the steps of the underground and in South Hampstead motorists desperately tried to navigate their way through the roads as the heavy rainfall continued to fall.

Elsewhere, in St John’s Wood, one homeowner was left shocked as water began to splurge out of their overflowing toilet through their property.

A spokesman said: ‘Reports of heavy flooding around Westminster including Colville Terrace, Holland Road and Ladbroke Grove Emergency services assisting in evacuating areas due to reports of flooded properties and collapsed ceilings. Road closures are in place.

It came as the Met Office issued a yellow weather warning for rain for a large section of southern England and the Environment Agency issued one flood alert for areas close to the upper River Loddon in Basingstoke, Hampshire.

As the intense downpours ensued, the London Fire Brigade confirmed they had received more than 1,000 calls related to flooding and urged people to ‘only call if there was a genuine emergency’.

A spokesperson for the service said: ‘We’re asking people not to walk through or drive through the flood water. Flood water can be contaminated and vehicles can become unstable.

Yesterday, Euston Station lines had to be shut down and underground stations, including Chalk Farm and Hampstead stations in north London and Wimbledon in the south, also drew their barriers due to the heavy rainfall.

A Network Rail spokesperson said: ‘The line between Watford Junction and Euston has been closed and engineers are on site inspecting the track as the water recedes. As soon as it is safe to do so, we will have trains on the move again.

‘We would advise anyone travelling this evening to check with their train operator or the National Rail Enquiries website for the latest information.’ 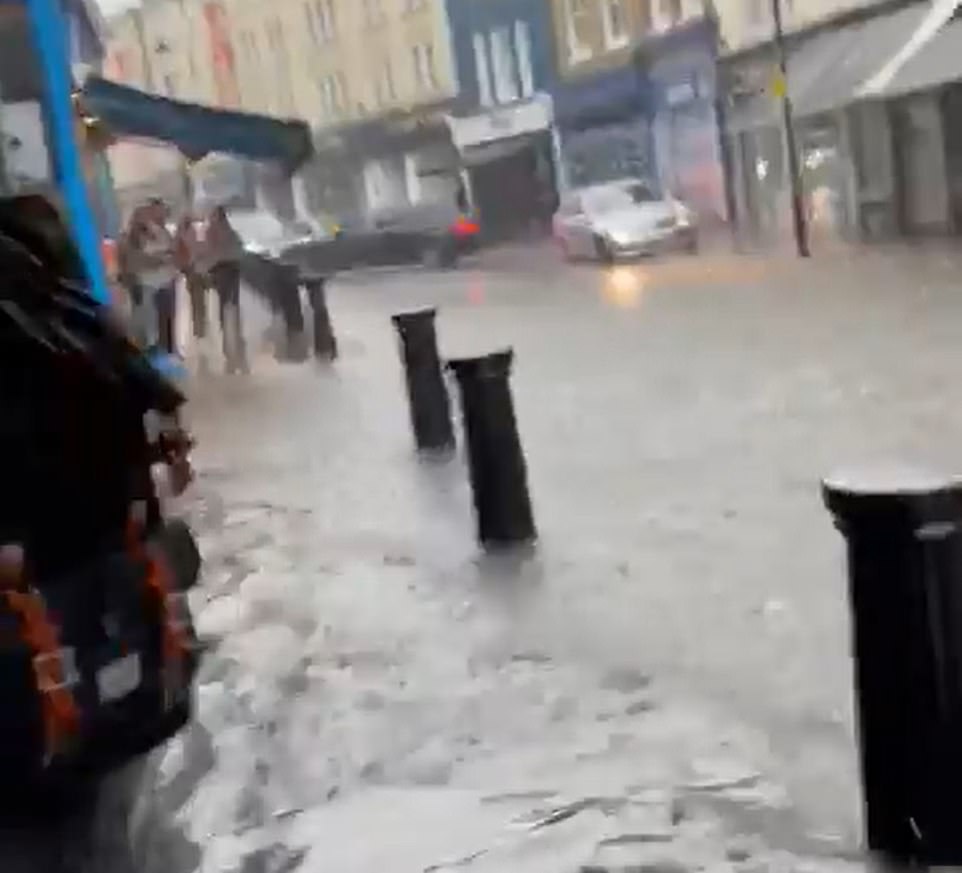 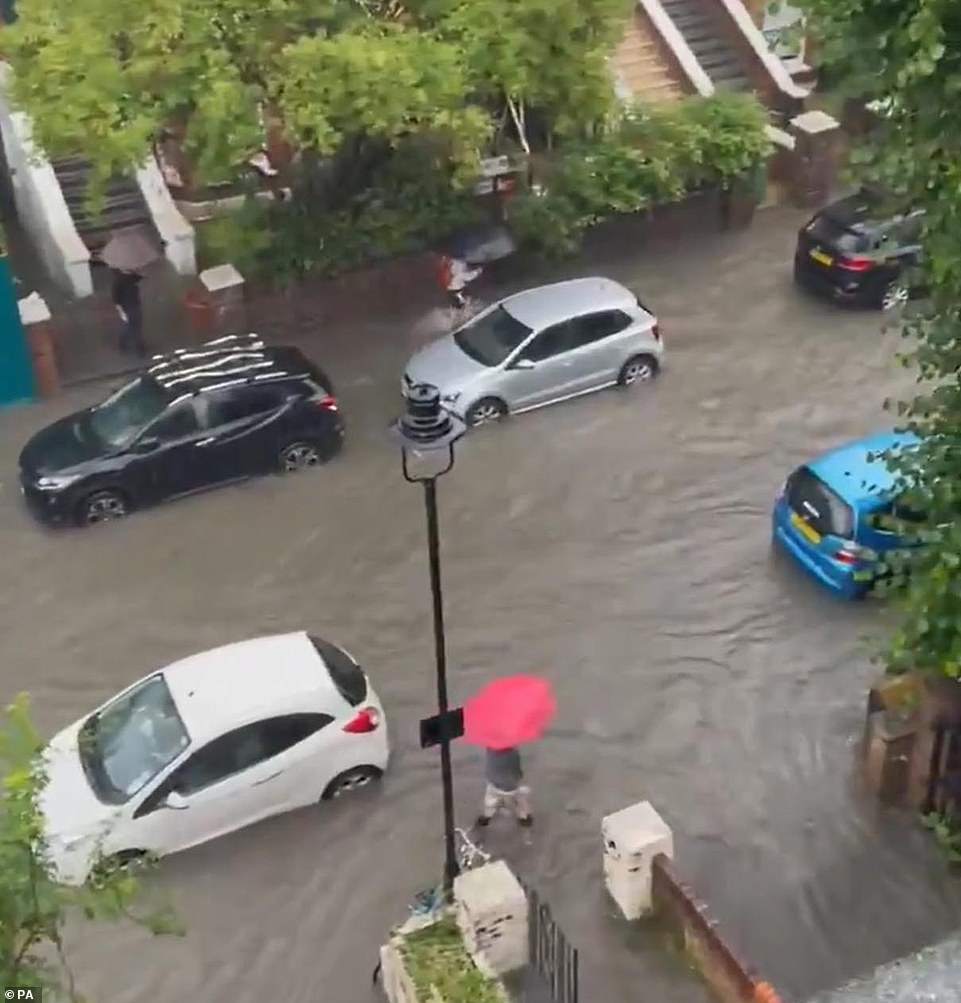 Cars are left abandoned in around 2ft of water after heavy rain falls on a road in South Hampstead, north London, yesterday 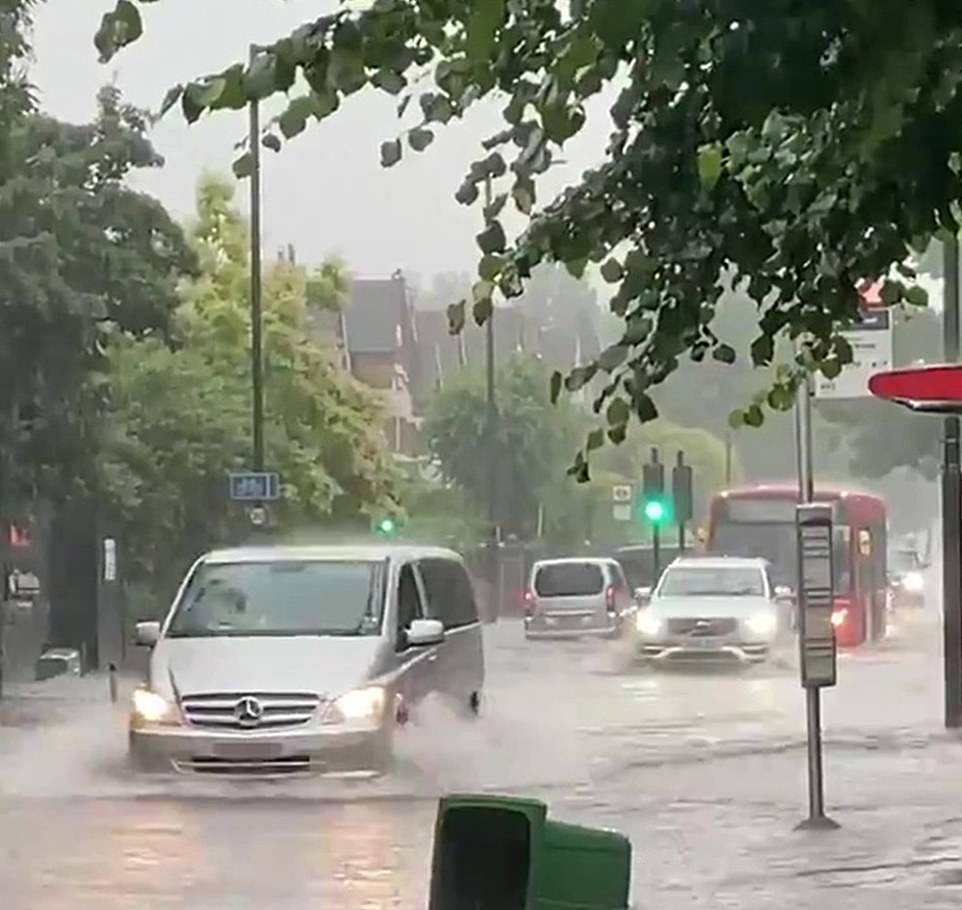 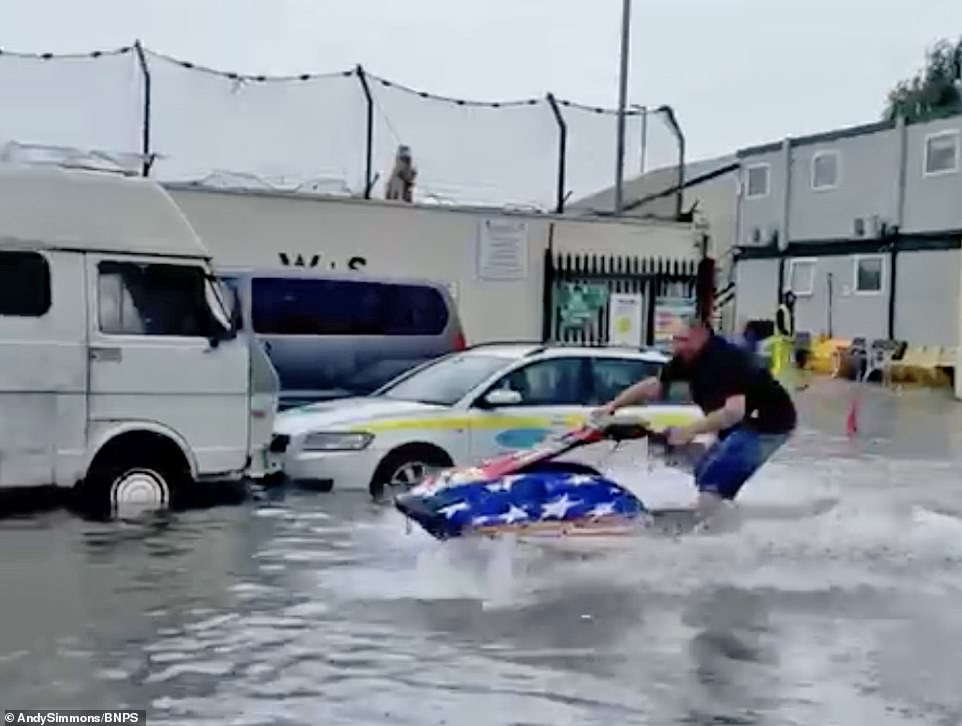 It wasn’t all mayhem, as mechanic Andy Simmons downed tools and brought out the jet-ski he stores at his garage in Poole, Dorset 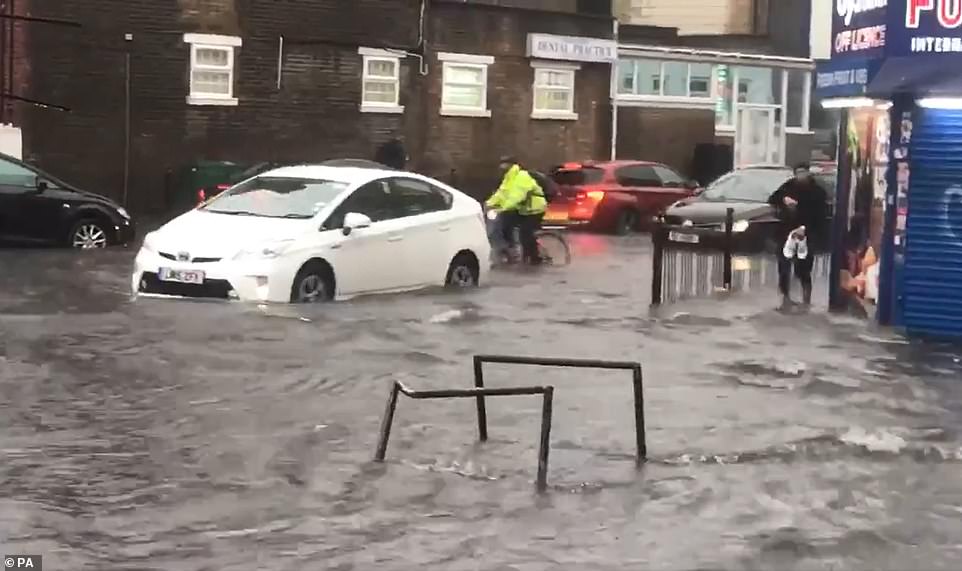 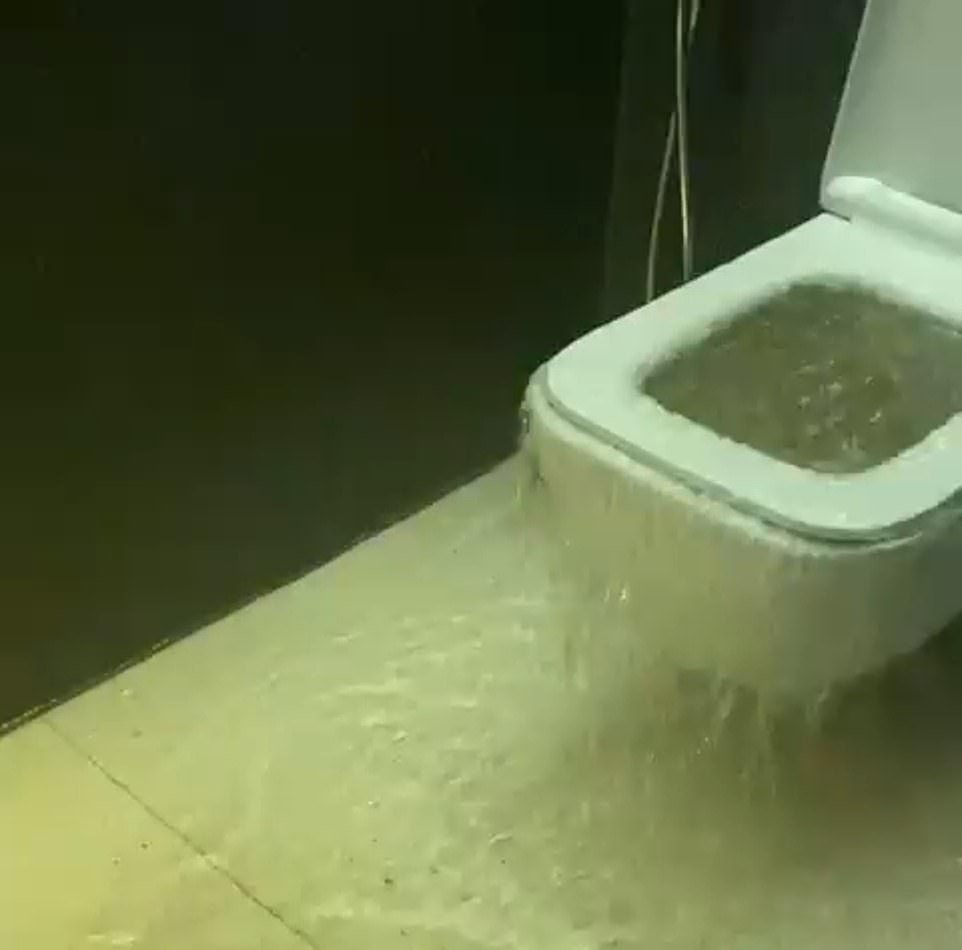 In St John’s Wood, one homeowner was left shocked as water began to splurge out of their overflowing toilet through their property 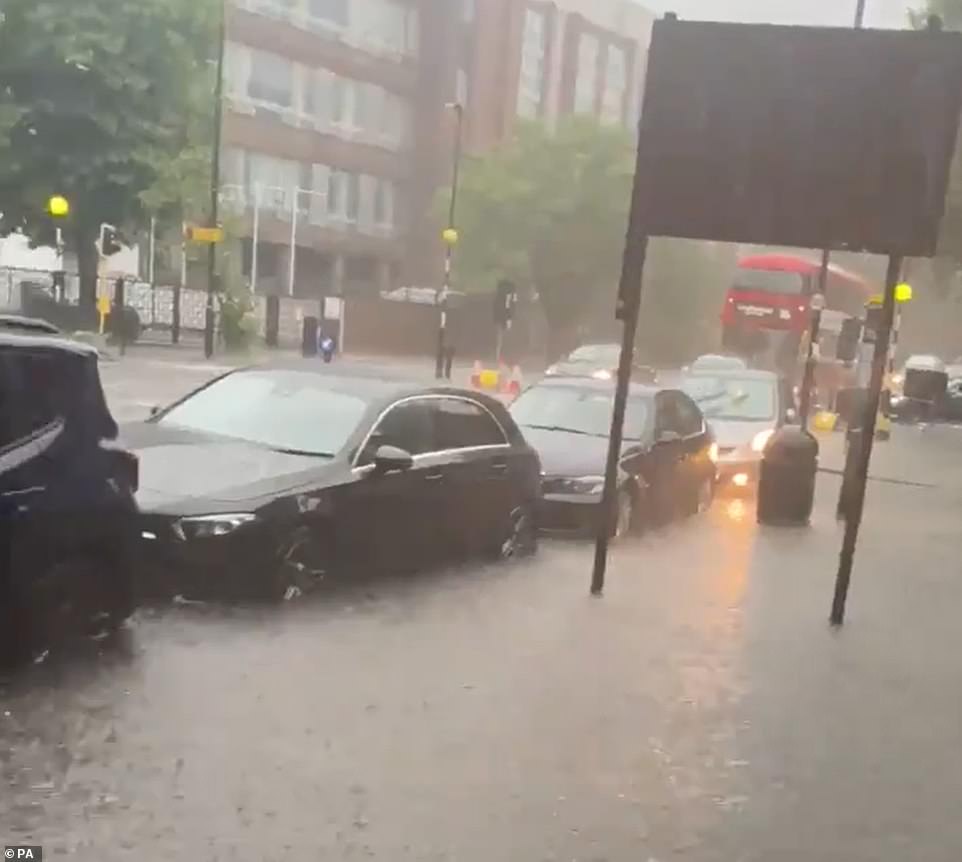 Roads are flooded in Maida Vale, west London, after heavy rainfall hits the capital – with nearly three inches of rain hitting the region in just 90 minutes 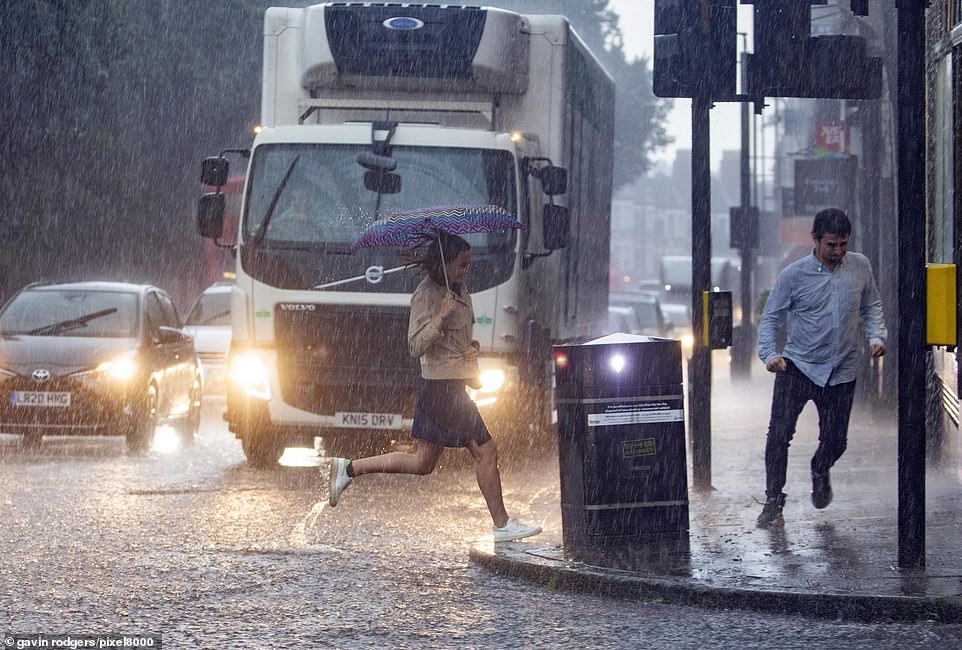 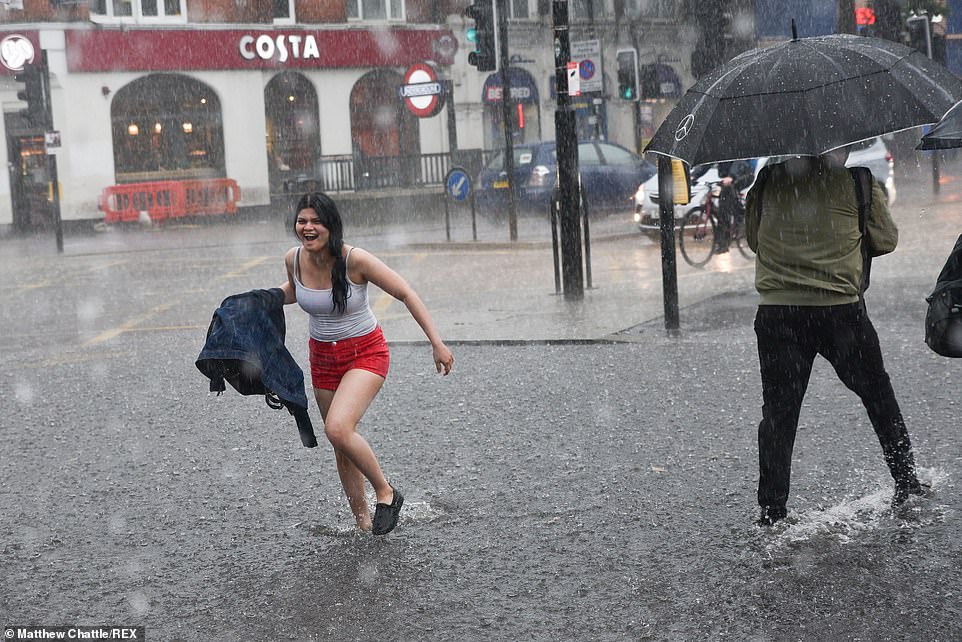 People are left drenched as torrential rain falls down on Turnpike Lane in north London, with the Met Office warning of floods and up to two inches of rain 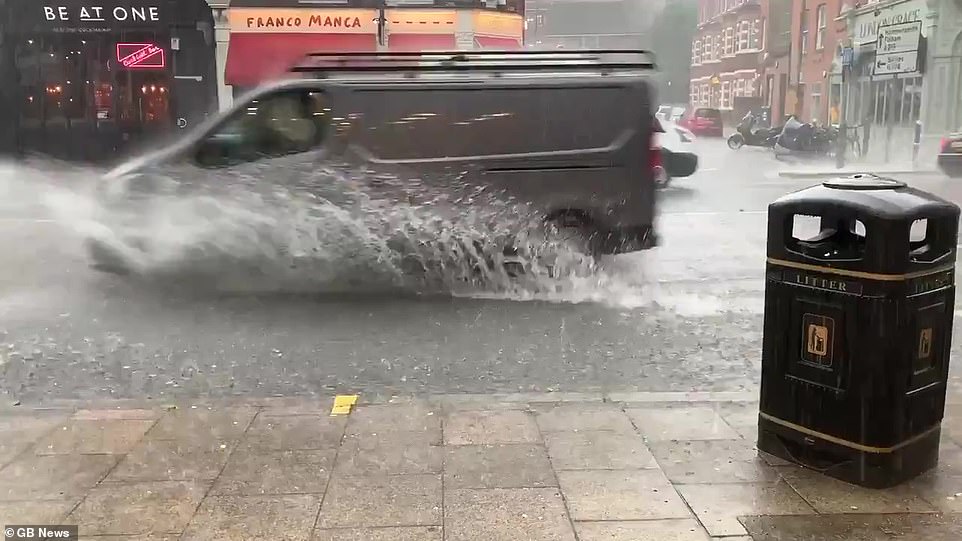 The London Fire Brigade received more than 1,000 calls last night and the Met Office also warned there would be flooding in the south of the country 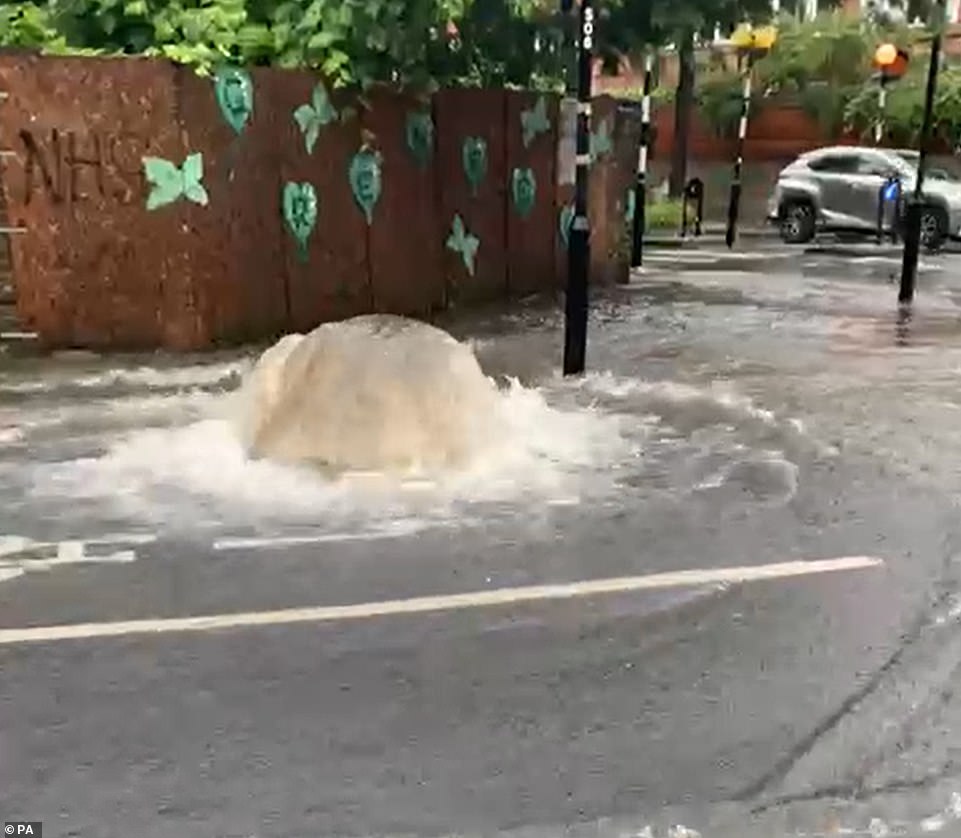