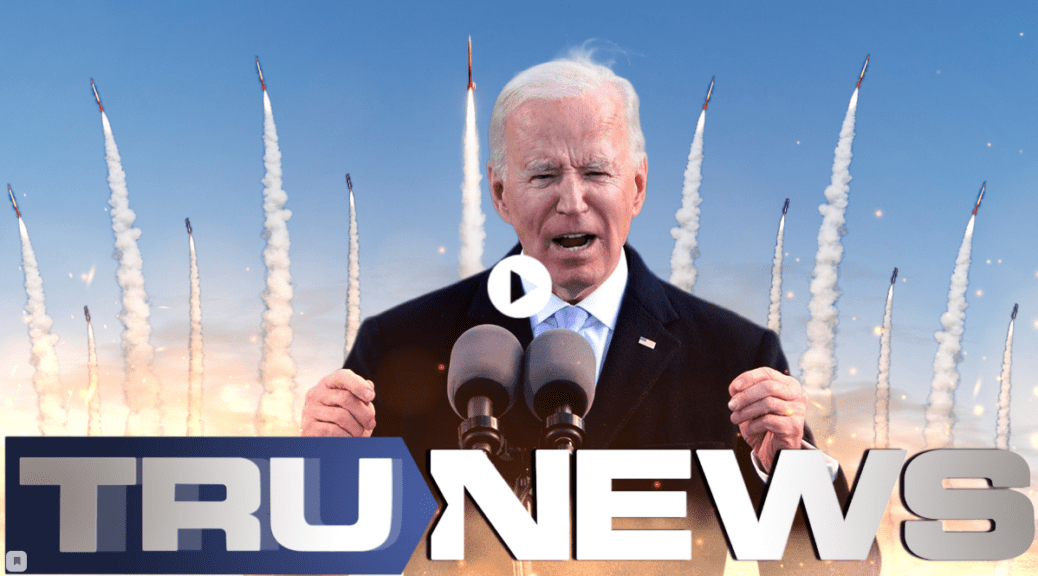 Today on TruNews, we discuss President Biden’s not-so-veiled threat to use nuclear weapons against Americans who dare challenge the ruling elite. We also detail Russia’s latest stand-off with NATO in the Black Sea, as Putin pledges to bomb any British warship that violates their sovereign territorial waters.

Lastly, we share a heartwarming story from Oklahoma, where a 20-year-old African American man gets a car, a bike, and a mentor after a Christian Good Samaritan saw him walking 17 miles to work in the blazing sun.

President Biden made headlines on Wednesday after suggesting in a rambling gun control speech that gun owners who want to take on the government would need “F-15s and maybe some nuclear weapons.”

Biden then said that there have always been limits on what kinds of weapons people can legally own – incorrectly including cannons, which have been legal to own for centuries.

All jokes aside, as Emily Miller of Emily Post News wrote in March, Biden has been tripping over his own feet on gun control for quite some time (emphasis ours).

Joe Biden has not yet been president for 100 days, and he is already trying to get more gun control. Biden is exploiting the tragic mass shootings in Atlanta and Boulder to placate his base and try to prove his old “assault weapon” ban would work after all.  He will fail. Again.

Biden has tried to get gun control measures for decades and with Democratic control over the House and Senate, this is his last ditch effort. But looking at his past mistakes, this effort will be full of missteps.

On Tuesday [March 23], he called for the Senate to “immediately pass” two House bills — one that address the supposed loophole in background checks and a return of the old  “assault weapons ban.”

Biden has been pushing for these and other pointless measures to address gun crime for years. I went back to my own book “Emily Gets Her Gun” to recall Biden’s past gun control agenda and the multiple mistakes he’s made on basic facts in order to promote his agenda. These sections are indented with the page numbers for those of you who have the book and want to follow along.

Biden was one of the authors of the 1994 Crime Bill that included a 10-year “assault weapon ban.”  The gun control law was so unpopular that Democrats lost the House that year. As a result of that shift in seats, Congress has not been able to get the votes for anything that violates the Second Amendment since then.

The ban expired in 2004 after the FBI told Congress the law was not needed for gun crime. Crime overall decreased in the 90s and 00s and rifle crime is rare in the country. FBI statistics show that most years, about 300 people are killed by rifles of any kind. Dianne Feinstein who is the biggest proponent of an assault weapon ban, estimates about 50 people are killed each year in America by guns with the characteristics that make them banned.

Obama ran against guns but once in office, he didn’t pursue the agenda with any real effort because he wanted to get reelected. Note the landmark Supreme Court Heller decision was in June 2008 and affirmed an individual’s right to keep arms and struck down DC’s total ban on gun ownership. This applied only to federal lands since the District is not a state (so far.)

In 2010, the high court ruled in the McDonald case that Chicago’s laws requiring guns be registered and effectively refusing any handguns be possessed was also unconstitutional. This ruling made the Heller decision on the individual’s right to have a gun (not the common mistaken reading of the militia) the law for the states.

So with all this pro-Second Amendment movement in the courts, it wasn’t until after Obama had been reelected in 2012 that he started coming after guns.

In the eight years since the “assault weapon ban” expired, annual gun crime had continued to decrease or stay the same. But the media attention on mass shootings had dramatically increased. So right after the horrific shooting of young children in Newtown, CT by a psychopath in Dec. 2012, Obama launched a real push for gun control in Congress. He tapped Vice President Biden to lead a task force that would come up with “concrete proposals” by January (the next month.)

(p.26) Just five days after Sandy Hook, he announced that Vice President Joe Biden would lead a task force to come up with “concrete proposals no later than January—proposals that I then intend to push without delay.” The president made it clear that the recommendations of the task force were predetermined, saying he had picked Biden to lead the effort because “he wrote the 1994 Crime Bill,” which included the “assault weapon ban.”

While it was developing the agenda, the Biden task force invited pro-Second Amendment groups to just one White House meeting, on January 10.

The Brady Law mandates an instant background check before buying a gun from a federally licensed dealer. These “NICS” checks can check for data in the FBI system such as felonies, mental illness, drug convictions and instantly tell the dealer if the gun purchases can legally buy the gun. Since the person didn’t actually buy a gun, these NICS checks can be used to prosecute the criminals trying to buy guns again by their signature on the application which is a felony for perjury. Biden didn’t understand this as late as 2013.

P. 92– NRA’s Chief Lobbyist James Baker to Biden- “I told him that it didn’t make sense to have federal penalties for lying on the form you have to fill out to purchase a firearm if no one is ever prosecuted for it,” he recalled in an interview. Baker told me that Biden turned to him and said, “Jim, we’re not interested in chasing paperwork violations.” Baker said, “Well Mr. Vice President, with all due respect, if you’re not prosecuting when they lie on the forms, you’re not stopping them.”

Biden today is calling for what the left calls the “Charleston Loophole.” This is just another term for what they used to call “universal background checks” that failed to pass the Senate in 2013.

The Senate did not pass any gun-control measures after the pro Second Amendment Democrats joined with the REpublicans to stop the bills that Mike Bloomberg spent millions promoting.

P. 109– At 5:30 p.m. on the day of the vote, President Obama held a drama-filled press conference in the Rose Garden with families of victims of gun violence. A father of one of the children killed at Sandy Hook Elementary School spoke. Former Representative Gabrielle Giffords, the victim of a gun attack by someone with apparent mental health issues, stood to Obama’s right side.

Vice President Biden stood to his left side with his arms crossed, first scowling and then crying.

P-110– Obama, who once served in the Senate, bizarrely blamed the normal procedural rules of the upper body of our legislature for the failed vote. “A majority of senators voted ‘yes’ to protecting more of our citizens with smarter background checks, but by this continuing distortion of Senate rules, a minority was able to block it from moving forward.”

There was no “distortion.” The Senate was created to be a deliberative body. To avoid filibusters, while still moving business along, the Senate normally agrees to require 60 votes for bills to pass.

Pres. Biden has said in the past that he owns shotguns for self defense. At the same time, he helped write legislation to outlaw AR-15 style rifles, which were – at that point- less often used in homicides than shotguns. Anyway, he clearly is not a responsible gun owner.

P. 48 – Biden said “a shotgun will do better for you than your AR-15” and “people can handle a shotgun a hell of a lot better than they can a semiautomatic weapon in terms of both their aim and their ability to deter people coming.”

Biden told Field & Stream magazine in 2013 that a shotgun is better than an AR-15 “because if you want to keep someone away from your house, just fire the shotgun through the door.” [Never do this at home, kids!]

At a town hall meeting at the White House, a female reader of Parents magazine asked him whether the administration’s ban on certain firearms and magazines would make law-abiding citizens more vulnerable to criminals.

“If you want to protect yourself, get a double-barrel shotgun,” he answered: “As I told my wife — we live in an area that’s wooded and somewhat secluded — I said, ‘Jill, if there’s ever a problem, just walk out on the balcony here, walk out, put that double-barrel shotgun and fire two blasts outside the house. I promise you, whoever’s coming in is not going to.’”

[Note to gun owners: never shoot in the air unless you’re hunting and never walk outside when a criminal is trying to enter your house.]

P. 253 – Vice President Biden used the White House bully pulpit to help reinforce the gun grabbers’ misinterpretations of Scalia’s remarks. “Justice Scalia, who is a brilliant conservative mind on the court, pointed out the government has the right to prohibit the sale of certain types of weapons. It’s constitutionally permitted. Senator Feinstein has an amendment to keep those weapons of war off the streets and not aimed at you,” he said.

This is not at all what Justice Scalia wrote. The court never ruled on the type of guns that could be carried, which is why it’s still up for interpretation and why many states and cities have “assault weapon bans” in effect still in 2021. That AWB has been in effect in Boulder, CO since 2018.

We will soon learn what drove the mass murderers in Atlanta and Boulder to commit evil crimes, but it is not access to guns. From the federal to city government, every gun-control law that has been conceived has been tested. None reduced gun crime nor stopped criminals from killing innocent people.

You would think after 30 years of leading the charge to ban guns, Biden would have learned by now that getting a new gun-control law is as effective as Jill Biden shooting into the air.