The following is Hal Turner’s response to Joe Biden’s speech. 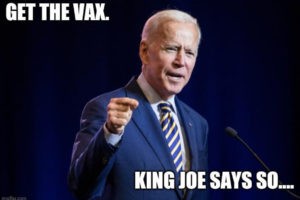 Illegitimate President Joseph Biden went “all-in” on full scale Tyranny Thursday by announcing new vaccine demands, mask mandates, and threatening to “Use my power as President to Get (Governors who oppose him) out of the way.”  The stage is now set for actual Civil War in the USA.

First, video of the STUNNING threat Biden made to remove state Governors who oppose him:

The reaction from state Governors made clear, a major line in the sand had been crossed, and Civil War was now, officially, brewing.

“The American Dream has turned into a nightmare under President Biden and the radical Democrats. They have declared war against capitalism, thumbed their noses at the Constitution, and empowered our enemies abroad. Rest assured, we will fight them to the gates of hell to protect the liberty and livelihood of every South Carolinian.”

“Biden’s vaccine mandate is an assault on private businesses. I issued an Executive Order protecting Texans’ right to choose whether they get the COVID vaccine & added it to the special session agenda. Texas is already working to halt this power grab.”

“The Biden Administration’s recent announcement seeking to dictate personal freedom and private business decisions is an insult to our American principles of individual liberty and free enterprise. This heavy-handed action by the federal government is unwelcome in our state and has potentially dangerous consequences for working families.  Vaccination protects us from serious illness, but the decision to get vaccinated is a private health care decision that should remain as such. My administration will always fight back against federal power grabs and government overreach that threatens to limit our freedoms.”

The utterly shocking remark by Biden caused many Americans to recoil in horror and ask themselves how he intended to do that, since it was States which created the federal Government, and not the other way around.

Hal Turner Remarks:  I called some of my former colleagues in the Intelligence Community from my years with the FBI Joint Terrorism Task Force, where I handled “national security Intelligence”, terrorism, and foreign counter-intelligence, and I asked them how Biden thinks he can do that.

I nearly fell off my chair when the response came within 2 seconds:

“The fourteenth Amendment, Sections 3 and 4.”

So I looked up that Amendment and its sections.  Here they are:

No person shall be a Senator or Representative in Congress, or elector of President and Vice President, or hold any office, civil or military, under the United States, or under any State, who, having previously taken an oath, as a member of Congress, or as an officer of the United States, or as a member of any State legislature, or as an executive or judicial officer of any State, to support the Constitution of the United States, shall have engaged in insurrection or rebellion against the same, or given aid or comfort to the enemies thereof. But Congress may by a vote of two-thirds of each House, remove such disability.

It seems as though Biden intends to declare Governors who oppose him to be “in insurrection” and send either federal agents or federal troops to remove that Governor from office pursuant the Section 3, and/or to withhold all federal money to such states under Section 4 above, claiming the state itself is “in insurrection” by failing to obey Biden’s vax and mask mandates!

I was also tersely informed that USSS, FBI, and DHS task forces were set up ahead of Biden remarks to monitor “violent revolt speech” online!

So they knew that Biden was going full-tilt-tyranny, and they began monitoring online speech looking for “violent revolt speech” because that is what they now expect.

The mask is finally off; Joe Biden is not only an illegitimate President who took office by stealing the November, 2020 federal election, but he now appears to be a full-on Tyrant.

It seems to me that we here in America no longer have an actual federal government, what we now have is federal tyranny masquerading as a government.

By Biden’s own admission, there are over 178 million Americans who are vaccinated.   Yet, we now know from CDC and state health agencies that daily cases of COVID right now are 300% higher than they were a year ago when there were ZERO people vaccinated. (Proof)  No one in government even attempts to explain this. Ask why.

But if you – or your Governor – say “no” then Biden plans to remove your governor as being “in insurrection?????”

Then we find out that USSS (US Secret Service), FBI and DHS have task forces set up and engaged in seeking out “Violent revolt speech.”   So they KNOW they’re engaged in outright tyranny and they plan to what . . . arrest people who talk about putting a stop to their tyranny?

Uhhhhh . . . no to that, as well.  The whole First Amendment thing flatly prohibits the US Government from “. . .abridging freedom of speech or the press . . .” and that Amendment remains in full force and effect 24 hours a day, 7 days a week, everywhere.  It cannot be held by a court to “not protect” certain speech because that power does not exist within the Amendment.   If someone in Congress or the courts wants such an exception to protected free speech or protected free press, they have no choice but to seek an AMENDMENT to the Constitution to permit them that power.  And an Amendment must be drawn up by Congress, passed, then sent to each of the fifty states and be ratified by 3/4 of them in order to take effect.  So the First Amendment applies to ALL speech and all Press, all the time, and no legislator or judge can hold otherwise because they lack the power to do so.

Folks, I think we have now arrived at the end game.  Push is finally coming to shove.

At this point, it seems easy for me to see Civil War stemming from this;  a huge line in the sand has now been crossed.  Even a state Governor is now openly saying “. . .  we will fight you to the gates of hell to protect . . .  rights . . .”   That, ladies and gentlemen, is war talk.

You know, in our founding documents, the Declaration of Independence in particular, the Founding Fathers laid out the following truism:

“But when a long train of abuses and usurpations, pursuing invariably the same Object evinces a design to reduce them under absolute Despotism, it is their right, it is their duty, to throw off such Government, and to provide new Guards for their future security.”

Doesn’t our own Declaration of Independence tell us what is to be done under such circumstances?  Doesn’t it say “. . . it is their right, it is their duty, to throw off such Government, and to provide new Guards for their future security?”

Yes, it does say that.

Even former Presidential Advisor Stephen Miller sees this for what it is:

You now what I think is going on here?  I think this is a re-make of the “Indian Policy.”

With Biden taking off his mask, and revealing himself a full-tilt tyrant, I cannot help but feel that, at this point, the entire system is coming down.

It doesn’t matter if you take the bio weapon gene therapy “vaccine” or not.  Here is the Governor of West Virginia, giving the bad news to those who TOOK both jabs of the so-called “Vaccine”  (Hint, it doesn’t work):

At least eighty-million (80,000,000) of us have not taken it and few have any intention at all of doing so.   With at least 16,000 in the US already DEAD from the vaccine, and another six-hundred-thousand (600,000) severely injured, some permanently, most who have not taken the jab are not going to.

If Biden and Company try to take away the God-given freedom of those people, they have a right to defend themselves from such tyranny.

It seems to me, as an observer, that all this nonsense will not stop until we make it stop.

Biden and company should stop now, while Americans are still willing to LET THEM stop on their own.

In the meantime, start taking your money OUT of the banks.  A few thousand a week until it’s down to almost nothing.

They want to try to force 80 million of us to do what they want?  Let them try when they have to bail out the banks that are keeling-over dead because all 80 million of us are pulling our money out.

We 80 million can grind this country to a halt so fast it will make their heads spin.

If taking the money out fails to stop them, then we go the same route as the Solidarity Movement in Poland back in the 1980’s when they were battling Communism: stop working.

The cash machine that is the economy, shuts off.

They can’t force us to work.  So the country implodes.

And none of us will have had to even fire a single shot.

By taking our money out, and stopping work, we can tell Biden and Company to kiss our ass.   We will not comply.