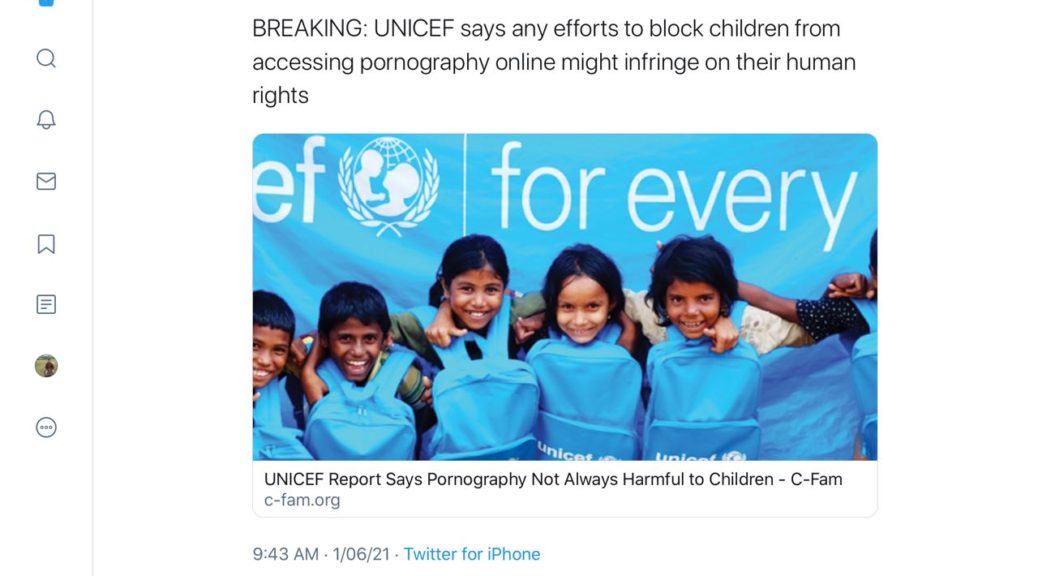 If you are splitting hairs then the text of the tweet is misleading – but not really.

WASHINGTON, D.C., May 14 (C-Fam) A UN agency is again immersed in controversy for a recent report suggesting there is no conclusive evidence that children exposed to pornography are harmed.

The report published by the UN Children’s Fund (UNICEF) addresses how government policy can be used to protect children from harmful, abusive and violent content online.  Its conclusion is based on a European study of 19 EU countries that found in most countries, most children who saw pornographic images were “neither upset nor happy.” In fact, the report UNICEF relies on says 39 percent of Spanish children were happy after seeing pornography.

Thompson’s organization, which provides expert research to inform policy decisions to end the sexual abuse and exploitation of women and children, has found that pornography can be a central driver of this abuse.

“Mainstream pornography contains horrific sexual abuse, rape, incest, racism – all of which children should not consume,” continued Thompson, and “UNICEF’s milquetoast assessment of the impacts hardcore pornography on children does nothing to challenge the political narrative that pornography is benign, and as a result, puts children in harm’s way.”

The 2020 EU Kids Online Study concluded that some children and young people “intentionally seek out sexual content” for a variety of reasons and that seeing sexual images “might also represent an opportunity” to provide answers to questions about puberty and sexual identity. The study encouraged “seeing the nuances” which lead children to seek out and view sexual content online.

UNICEF says any efforts to block children from accessing pornography online might infringe on their human rights. UNICEF bases this claim on an expansive interpretation of the International Covenant on Civil and Political Rights.

UNICEF’s release of this report comes just days after the U.S. Agency for International Development announced its renewal of its longstanding partnership with UNICEF, committing an additional $300 million in direct program funding. The U.S. is UNICEF’s largest government donor with 2020 funding reaching almost $994 million in humanitarian and development programs.

UNICEF generally has joined the feminist push at the United Nations in calls for abortion. The children’s agency was founded to help displaced children after the Second World War. Critics say UNICEF has strayed far from its founding vision, and that this call for children’s access to pornography under the guise of human rights and sex-ed underscores this change. At one time, the Holy See stopped its annual symbolic donation to UNICEF.