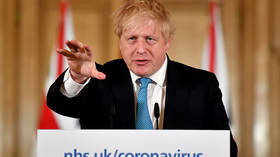 Boris Johnson has been moved into intensive care after his Covid-19 worsened, a spokesperson for No. 10 Downing Street said on Monday, a day after the PM was hospitalized for further tests.

“Over the course of this afternoon, the condition of the Prime Minister has worsened and, on the advice of his medical team, he has been moved to the Intensive Care Unit at the hospital,” the spokesman said.

“The PM remains conscious at this time.”

Johnson has asked Foreign Secretary Dominic Raab to stand in for him where necessary.

The PM was admitted to St Thomas’ Hospital in London on his doctor’s advice on Sunday as symptoms of his Covid-19 infection continued some 10 days after he was confirmed to have contracted the virus.

The 55-year-old had been self-isolating in his residence on Downing Street after the diagnosis, but continued to work. He suffered breathing difficulties while in hospital on Monday afternoon and was administered oxygen, according to UK media reports.

Earlier in the day, the PM tweeted that he was “in good spirits” and thanked NHS staff for their care.

Last night, on the advice of my doctor, I went into hospital for some routine tests as I’m still experiencing coronavirus symptoms. I’m in good spirits and keeping in touch with my team, as we work together to fight this virus and keep everyone safe.

I’d like to say thank you to all the brilliant NHS staff taking care of me and others in this difficult time. You are the best of Britain.

Stay safe everyone, and please remember to stay at home to protect the NHS and save lives.

7,951 people are talking about this

Downing Street had confirmed last week that Raab would step in as acting PM if Johnson had to step back from his duties due to illness.

Speaking after news broke of Johnson’s move to the ICU, Raab said that the government’s business would continue, and there is “an incredibly strong team spirit behind the prime minister.”

According to the latest figures released by the Department of Health, 51,608 cases of coronavirus have been confirmed across the UK, with 5,373 deaths in hospital.

From the UK’s TV4