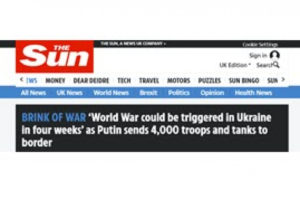 A veritable garbage dump of British media, “The Sun” newspaper, has a headline in yesterday’s edition ” . . . World War could be triggered in Four Weeks” over the ongoing and escalating situation in Ukraine.

Gee, that would put us at about May 2, the precise date I mentioned on my radio show last week, for the start of this conflict!

The April 3 issue of The Sun reports:

WORLD War could be triggered in just four weeks in Ukraine as Vladimir Putin sends thousands of troops to the Russian border, experts have warned.

The bombshell claims come as convoys of tanks and armoured vehicles were filmed being mass transported in regions close to rebel-held eastern Ukraine and annexed Crimea.

Those who have actually followed the development of these troubles don’t need a psychoanalyst to understand what’s going on, we understand quite clearly.

Back in 2014, it was the United States and European Union that fomented and funded the violent protests and riots which overthrew the Democratically elected President of Ukraine, Viktor Yanukovych.  WE CAUSED IT!

In fact, for several years prior, the US alone had spent $5 Billion “helping” Ukraine, in an effort to “woo” them to the West.

So intertwined in Ukraine affairs was the USA, that even before Yanukovych was overthrown, Gloria Nuland from the US State Department, was caught having phone conversations about who the US would approve to become Prime Minister under Yanukovych!   (A Dictator, dictating Democracy?)

In that phone call, at precisely 3:01, Nuland commented about what the US was doing and how the Europeans would view it when she said “Fuck the E.U.”

Here’s the COVERT INTELLIGENCE INTERCEPT of the phone call from Gloria Nuland:

And it got worse.   Then-Senator John McCain, personally spoke to the rioting Ukrainians in front of the Ukraine Parliament, and incited more trouble!

Americans all recall the recent protests at the US Capital which the Sissy-Mary Democrats are still calling an “insurrection?”   Well imagine if a Russian elected official like . . . . Zhirinovsky. . . . had given a speech at the US Capital that day, and then things all went haywire.  The US would claim that the Russian politician was trying to overthrow the US Government!  Yet Senator John McCain did the same thing – to Ukraine — and the mass media says absolutely nothing about how he, and the US fomented and incited the ACTUAL OVERTHROW of the Ukraine government!

The REASON we were trying to “woo” Ukraine was nefarious:

1) We wanted to put NATO military bases in Ukraine to position anti-missile “defenses” in that country, AND;

2) We wanted to deprive Russia of its only warm water military port on Crimea.

There were two gigantic problems with NATO doing these things:

A) Our “Defenses” . . .  could also be used as First-Strike weapons; their “conventional” missiles could be refitted in under five minutes, with NUCLEAR warheads.

Being located in Ukraine would have those missiles within five minutes flight time to Russia’s nuclear arsenal.

So having that capability via Ukraine, would make it physically possible for NATO to first-strike Russia and destroy Russia’s ability to fight back.   It would be a decapitation strike, AND

B) If Russia were to lose its only warm water port, in Crimea, their entire country would face a total shipping outage for imports and exports, during Winter when all their other ports freeze-over, and their military would have no access to global seas during those times either!

ARROGANT PLANNING A YEAR IN ADVANCE!

So ARROGANT were we about how effective this effort would be to grab Ukraine to our sphere of influence, a full YEAR before the troubles in Ukraine, the US Congress allocated money to start building a new Children’s Hospital on Crimea, in Simferopol, because we just knew we were going to take it.  They let the contract through the US NAVY . . . so they also KNEW that we were going to grab Crimea by force if need-be!

Here’s the screen shot of that contract offering from the US Government web site:

Here a direct link to the US Government web site which still holds the records, which still show the ORIGINAL OFFERING DATE of December, 2013 — a YEAR before all the troubles inside Ukraine! (Click HERE)

Here’s ANOTHER Contract offering by the US Government for a School in Sevestopol:

And here is a direct link the the US Government web site which still has the records, which show an initial offering date of  Sep 05, 2013 02:58 am EDT — more than a YEAR before the Ukraine President was overthrown!  (Click Here)

These two contract offerings are irrefutable PROOF the US (and Europe) KNEW they were going to forcibly overthrow the government of Ukraine and grab control of the country.  They were so arrogantly confident of success, they offered contracts for work a year before the deed was done.

There was no way that Russia would tolerate such a  thing.  So Russia politically backed Yanukovych while the US and EU were fomenting protests and riots.

That opened the door for US and EU-backed politicians in Ukraine to take power . . . and they did.

These new politicians were made to understand they needed to do the bidding of the US and of Europe.  Put simply, they were BRIBED.   Big bribes.   Cash.   Lots of it.

Ukraine is a relatively poor country, with annual family income of about two thousand US Dollars ($2,000.00).

Now look at the houses these Western-Backed politicians built themselves once they got their hands on US and EU cash:

(The NAMES of the politicians appear beneath each House image)

So we in the west literally BOUGHT ourselves the Ukraine government; and from 2014 it was to do OUR bidding.

Well, Russia wasn’t going to put up with that.

So they put thousands of troops into Crimea, first, to protect their warm water port and military base.

Then they fomented a political “revolt” in Crimea, telling citizens there the government in Kiev had been bought and paid for by the West and wasn’t loyal to Ukraine anymore, but also telling them that Crimea could VOTE to return to Russia and they could all become Russian citizens!

The public went for it.  They held an open, transparent, Referendum and about 96% of the people in Crimea VOTED to leave Ukraine and become part of Russia.

The west, furious that their plans were being thwarted, called the election “Rigged.”  The west refused to even recognize it, and immediately put sanctions on Russia over Crimea.

The West officially lost because the Russian Duma (Parliament) passed legislation admitting Crimea back into Russia and that was the end of it.  Crimea is back home in Russia, where it had been for 300 years before then-Soviet Chairman Nikita Khrushchev, “gave” Crimea to Ukraine, 54 years ago.

When other areas of Ukraine saw what happened to their duly elected President, and saw the way bought-and-paid-for corrupt politicians were doing the bidding of the EU and the USA, they decided THEY wanted to leave Ukraine and become part of Russia as well.  The two areas where this sentiment was strongest was in the oblasts (states) of Luhansk and Donetsk, highlighted in Red (along with Crimea) on the map below: 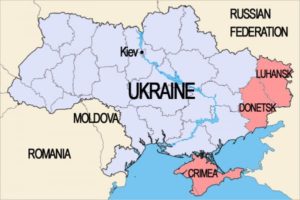 Those two oblasts (states) held votes and their populations voted to leave.  But Kiev, the capital of Ukraine, seeing their plans falling apart, said “no, you can’t leave.”

Kiev sent TROOPS to try to quell the secession of Luhansk and Donetsk.  But the two states formed militias which fought the Ukrainian Army to a stand still.

It was during this fighting that upwards of 13,000 Ukrainians KILLED each other in battles. 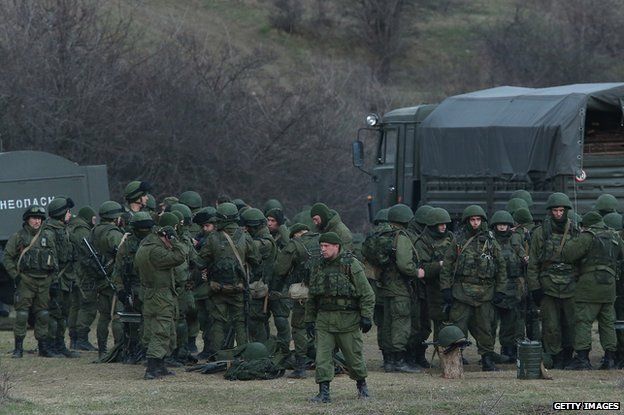 It was with the help of those “Little Green Men” that Luhansk and Donetsk held-off the Ukrainian Army to this very day.

Meanwhile, time rolled on and elections were held in the USA.  Donald Trump won.

Suddenly, all the troubles in Ukraine got very much quieter.  They stayed quiet throughout the entire Trump administration.

Fast-forward to November 3, 2020 and Joe Biden and his Democrat Party, STOLE the US Presidential Election.

As soon as Biden was illegitimately inaugurated as US President, what happened?   Troubles started all over again in Syria and in . . .  UKRAINE!

Last month, more of the trouble started cropping up when, unsolicited, the British Ambassador to Ukraine issued a Press Statement saying Britain would never accept Russian possession of Crimea.

Within days of that British announcement, Ukraine President Zelensky, started massing troops back at the borders of Luhansk and Donetsk.

NATO decided to have military “exercises” in the same area, adding vast Naval exercises in the Black Sea . . . around Crimea.

Russia knew immediately that the West was going to try to TAKE CRIMEA BY FORCE, so they began deploying military assets into Crimea, and also building up military assets on the Russia side of Luhansk and Donetsk.

A fight was clearly brewing.

Things have now gotten to the point where an actual war between NATO and Russia is not only possible, it is highly likely.   And the people in the middle of it?   Ukrainians.

It is they who will die — en masse — if this war breaks out.

But the stakes are incredibly high for the rest of the world too.

If Europe and the USA (NATO) are able to grab Crimea, Russia loses its only warm water port, and faces US Missile Defenses making a decapitation nuclear strike on Russia itself.

If they are able to grab Luhansk and Donetsk, those missile defense systems can be put there are achieve the same goal.

Thus, Russia MUST act in its own self-defense for its actual survival.  And they will.

Russia did not start this conflict, the West did.

Russia has no designs on taking over Europe or anywhere else; the West has those designs upon Russia. The West wants the oil, the gas, the minerals and the land.

When the fighting breaks out, likely less than a month from right now, if NATO gets involved, then every NATO country will instantly make itself a legitimate target for Russian self defense.

Europe and America could face Russian missile strikes.  And we will have brought it ALL upon ourselves.