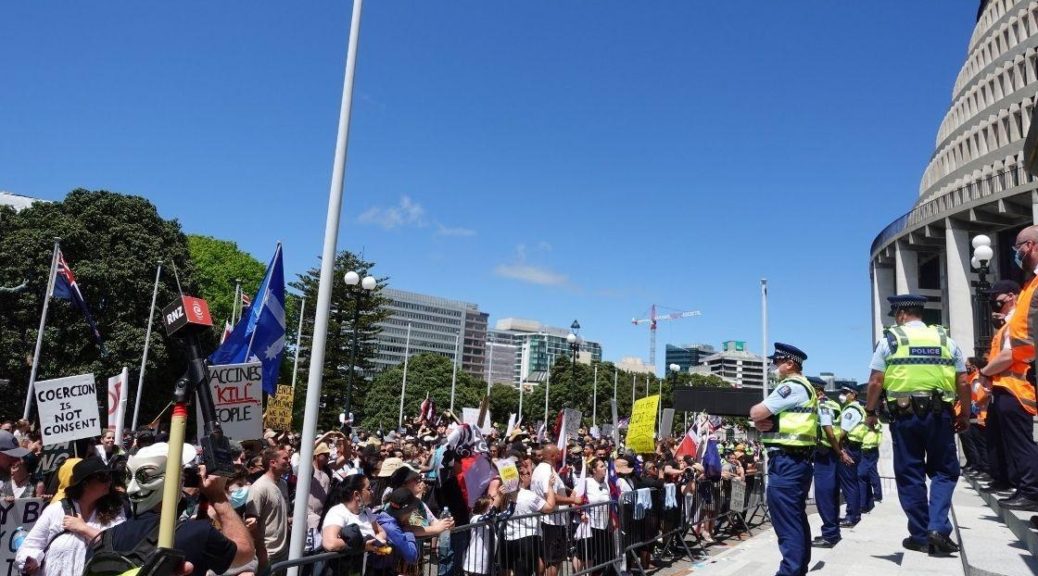 Some 25 years ago I asked a Czech acquaintance what the difference was living in New Zealand and in communist Czechoslovakia.

“we KNEW were being lied to”.

Nothing has changed in 25 years. Most kiwis still believe what has become crude propaganda that competes with anything that came out of the Soviet Union or its East European satellites.

Experts in terrorism say New Zealand’s lucky none of our politicians expressed support for Tuesday’s protest outside Parliament, or the outcome could have been very different.

Thousands spouted anti-lockdown and anti-vaccine messages, flew Trump flags and promoted conspiracy theories on Tuesday, in a protest which promoters had advertised as “9/11 for Ardern & the Labour Government” – a clear reference to the worst terror attack in US history, which left about 3000 people dead.

On Telegram – an app popular with the far-right and conspiracy theorists – some had threatened scenes like those seen in Washington DC in January, when supporters of outgoing President Donald Trump broke into the Capitol building, hellbent on lynching politicians and overturning Trump’s election loss. They failed, and five deaths were linked to the violence.

Chris Wilson, programme director of the University of Auckland’s Master of Conflict and Terrorism Studies, told The AM Show on Wednesday he’s seen “a number of commentators suggesting that we were likely to experience something like the Capitol attack”.

“I don’t think we’re quite at that stage yet, for a number of reasons. We don’t have any politician egging these people on to use violence, and most importantly we don’t have the number of militarised militant groups among these protesters pushing people on and organising an attack.”

While the Opposition has been relentlessly negative about the Government’s handling of the Delta outbreak – after largely backing the 2020 response – Dr Wilson said even the harshest criticism from inside of Parliament has been a “long, long way” from supporting violence.

Contrast that with the US, which saw the first year of the pandemic response led by a serial liar who went on to falsely deny he’d lost his job fair and square in November’s election, and encouraged supporters to “fight like hell” and “stop the steal”. His personal lawyer, former New York City Mayor Rudy Giuliani, told the crowd to prepare for “trial by combat”.

“That’s pretty important, that leadership,” said Dr Wilson, “because not only does it provoke people and mobilise people and get them out on the streets but it also makes them think that they’re going to be able to do that without any sort of punishment, and that’s really, really key for mobilising people to collective action like that, which we don’t have.”

Some of those later convicted over their actions on January 6 expressed surprise at their punishments.

While the Capitol insurrectionists had a singular goal, it only took a quick glance at the crowd in Wellington to realise the same wasn’t true on Tuesday – some seemed angrier at the media than the vaccine mandates and restrictions, others bringing up unrelated topics such as 1080 poison.

“It’s incredibly disparate and disorganised,” said Dr Wilson. “While they do have some leaders on social media organising the protests, it’s nothing like having a President or some politician.”

Javed Ali, professor public policy at Michigan State University, said Dr Wilson’s assessment was correct – and that COVID-19 public health efforts have “introduced a whole new series of issues that have led to grievances for individuals or groups that has fuelled this populist anger”.

“This has added another layer of complexity. It’s led to what I would argue is a higher level of mobilisation than in years past.”

He said he hoped New Zealand doesn’t follow the same path as the US, where anti-government sentiment has resulted in “mass casualty terrorism” – such as the Oklahoma City bombing – and planned violence against elected officials, such as Michigan Governor Gretchen Whitmer.

“We’ve seen this play out in the US from a terrorism perspective, and fast-forward to the COVID era, we had a plot in my home state of Michigan to kidnap the Governor… that was fuelled by this populist anger over COVID restrictions that were put in place.”

Facebook, which has removed some New Zealand-based anti-vaccination groups such as Voices for Freedom (who were present at Tuesday’s event) said the protest organisers’ adverts promising “9/11 for Ardern & the Labour Government” didn’t break its community guidelines.

A report released on Tuesday found there had been a rapid increase in the amount of disinformation spreading online since the Delta outbreak began, tied in with escalating violent rhetoric linked to extremist far-right groups – much of it misogynist and directed at the Prime Minister, including death threats.

“I’m sure that the Prime Minister and other leading politicians do have adequate security for their assessment of the risks at the moment,” said Dr Wilson.

“There clearly is some risk – we have seen assassinations of politicians overseas. I’m not saying that New Zealand is at that stage yet, but obviously there are some precedents for that type of action, so I would hope politicians do have adequate security.

Police made no arrests, but are considering “follow-up enforcement action”, considering “so many people chose to ignore various alert level requirements designed to keep us all safe”.

Arriving at Civic Square at 10 o’clock, thousands of people had turned up, with signs and flags, but few face masks in sight.

It was evident that the majority were protesting against Covid-19 restrictions, rather than the vaccine or the fact that the virus exists. However, there were many with that viewpoint too.

Despite many warnings from passing members of the public, myself and other members of the media ventured through, and were surprised at the peaceful welcome we received.

How quickly that changed once the noisy lot turned up.

We were aware of noise in the distance but didn’t realise it would be a group of up to 100 gang members on motorbikes that would be leading the protest down Lambton Quay and to the doorstep of Parliament.

Once the burnouts and revving started, it sparked anger and fear among the group, that they carried right through the business district.

The abuse directed at the media and Prime Minister was prolific as the group descended on the Beehive, only for it to get much worse once they’d arrived.

Once there, speeches ranged from people unable to visit sick relatives, to those who felt betrayed by the Government and its Covid response, at times calming the group and at others, stirring them up again.

It all came to a close with a hiss and a roar. Tennis balls covered in various anti-Covid labels were hurled at the media, and the group made their way over the first lot of barricades and up to the second at the base of the Parliament steps.

But the police increased their numbers threefold and formed a human wall around the building. It wasn’t long before the crowd started to disperse and make their way back to work and home.

If there’s two things I’ll take home from today, it’ll be “Poison Jab” and “Agenda 2030”. They’re the two labelled tennis balls that now sit on my desk as a memento.

Over 20,000 Freedom loving Kiwis marched on the New Zealand parliament representing thinking people from all walks of life, to voice their deep concern and anger over the tyrannical control being imposed on New Zealanders without any morale mandate.

While the arrogant treasonous cowards hid inside the peoples beehive, good people in their thousands amassed outside.

As expected neither, the PM or any member of parliament had the guts to front up and listen to the voice of the people. Instead the main stream media propaganda machine paid and bought for with tax payer dollars, were at it again in desperation, spewing the usual narrative full of the usual buzzwords, and lies about the march.

Unfortunately for them and their masters, those who attended the March saw the truth, and the live video coverage has gone viral worldwide revealing the facts, and has exposed the evil liars for who they are, as they dig their way deeper into the hot black hole of no return.