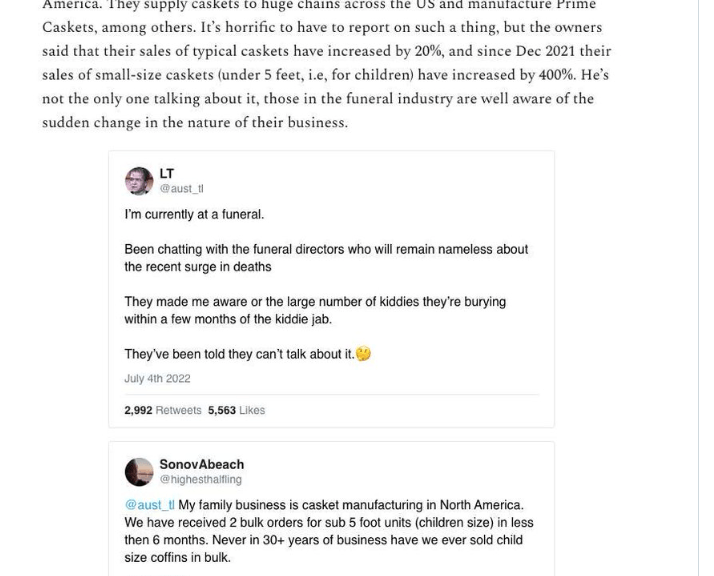 A casket manufacturing insider confirmed he’s received bulk orders for child-size coffins for the first time ever, which he believes could portend possible mass vaccine deaths.

Speaking to radio host Stew Peters Monday, Twitter user @highesthalfling revealed his identity as Mick Haddock, a casket salesman whose family business manufactures coffins which are then supplied to retailers such as Costco.

“My family business is casket manufacturing in North America. We have received 2 bulk orders for sub 5 foot units (children size) in less then 6 months. Never in 30+ years of business have we ever sold child size coffins in bulk,” @highesthalfling tweeted last Monday.

“Vaccines are killing children. If not, what is?” he added last month.

Haddock, whose alarming tweets were the subject of an Infowars report last week, told Peters he was surprised to see the child-size bulk orders.

“The smaller size orders have never been so popular,” Haddock told Peters, adding, “I would like to mention that all casket sales are up dramatically in the last two years.”

Asked what he believed could be prompting the bulk orders, Haddock argued the Covid vaccines are the most likely cause.

“Call it what you will, magic or the vaccine, but something has happened that is causing an unprecedented amount of deaths,” he said.

Expounding on Haddock’s “magic” remark, Peters explained there’s a dark satanic side to magic that revels in producing intentional outcomes.

“What we’re seeing here are intended consequences,” he added.

Haddock confirmed, “We are definitely seeing an uptick in youth passing, it is undeniable at this point.”

The casket maker went on to say child-size casket orders have increased by 500% over the past seven months.

“We went through an average of say, 50, 60 [child-size caskets] a year. The last order was 200 and the next order after that was 250. We’ve now basically sold 5 years’ worth of stock in 7 months,” Haddock admitted.

The bulk orders come as the US government last month became the first nation to approve Covid vaccines for infants as young as six months old, while the Canadian government seeks to approve jabs for the age group later this month. 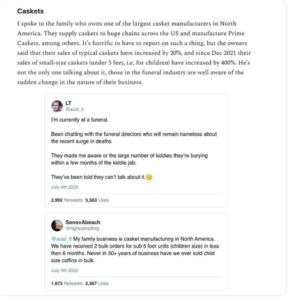 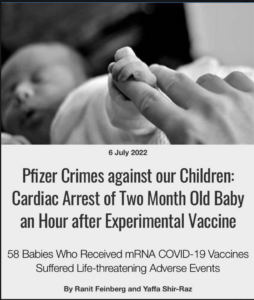