As such, any contagion from the ongoing turmoil sweeping China’s heavily indebted property sector will impact not the banks, which are all state-owned entities and whose exposure to insolvent developers can easily be patched up by the state, but the property sector itself, which as Goldman recently calculated is worth $62 trillion making it the world’s largest asset class, contributes a mind-boggling 29% of Chinese GDP (compared to 6.2% in the US) and represents 62% of household wealth. 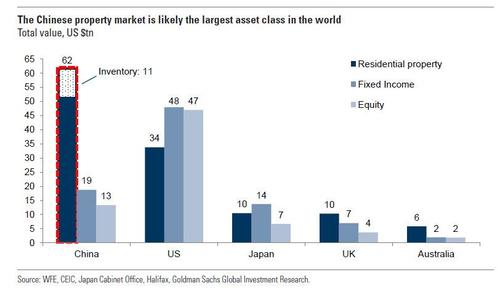 It’s also why we said that for Beijing the focus is not so much about Evegrande, but about preserving confidence in the property sector.

Remember: for China this is not about Evergrande, it’s about preserving confidence in the property sector

But first, a quick update on Evergrande, which – to nobody’s surprise – we learned today is expected to default on its offshore bond payment obligations imminently according to investment bank Moelis, which is advising a group of the cash-strapped developer’s bondholders. Evergrande, which is facing one of the country’s largest defaults as it wrestles with more than $300 billion of debt, has already missed coupon payments on dollar bonds twice last month.

The missed payments, worth a combined $131 million, have left global investors wondering if they will have to swallow large losses when 30-day grace periods end for coupons that were due on Sept. 23 and Sept. 29. A separate group of creditors to Jumbo Fortune Enterprises who are advised by White & Case, are also waiting for a $260 million bond principal repayment, after a bond guaranteed by Evergrande matured last Friday, and unlike the offshore bonds, does not have a 30 day grace period (although five business days ‘would be allowed’ if the failure to pay were due to administrative or technical error).

The Jumbo Fortune payment is being closely watched because of the risks of cross-default for the real estate giant’s other dollar bonds; it would also be the firm’s first major miss on maturing notes instead of just coupon payments since regulators urged the developer to avoid a near-term default. And with the five business days up as of today, and with a payment yet to be made, it appears that this weekend we will get news of a declaration of involuntary default from the creditor group which will set in motion the Evegrande default dominoes.

With that background in mind, let’s move on to the truly chilling latest developments: it now appears that China does not need Evergrande to officially default to unleash a property crisis – one has already arrived.

Recall that in September, sketched out Goldman’s three scenarios on China’s housing sector – a base case, a severe scenario and a third “hard landing.” 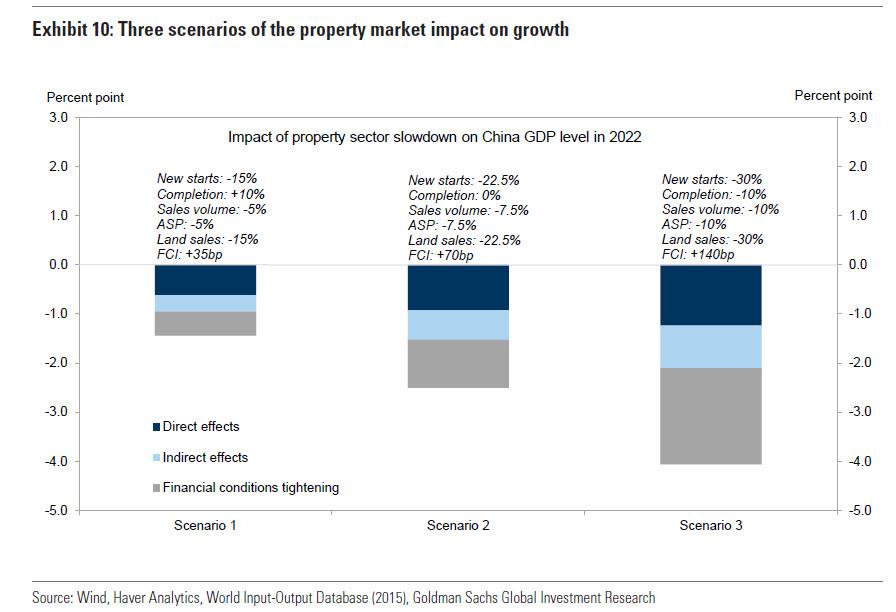 While readers can find the full details here, we focus on the worst case, “Scenario 3”, which Goldman summarized as follows:

In the third and most bearish scenario, land sales and housing starts fall 30% and property sales, house prices and completions drop 10% from 2021 to 2022. The tightening in financial conditions doubles that in the second scenario. Note that in this scenario, the tightening is of the same magnitude as the tightening in Goldman’s China Financial Conditions Index (FCI) from November 2017 to June 2018 when domestic credit tightening and the US-China trade war rattled the financial market significantly.

Quantifying this dire scenario, Goldman envisions a China where new property starts tumble 30%, completions drop 10% alongside sales volumes and ASPs. If this scenario comes to pass it would also wipe out at least 4% of China’s 2022 GDP, potentially resulting in full-year contraction at the second largest economy in the world, an outcome that would have catastrophic implications for the rest of the world. And with Goldman’s warning that such a scenario would lead to a tightening in financial conditions similar to what happened “from November 2017 to June 2018 when domestic credit tightening and the US-China trade war rattled the financial market significantly” and one can therefore see that while contagion from an Evergrande default may skip China’s banks, it would have no less dire consequences for global markets and economies.

With that preamble in mind, we bring readers’ attention to a little noticed report in Shanghai Securities News, citing China Real Estate Information Corp. research (link), which revealed that more than 90% of China’s top 100 property developers’ sales declined in September by an average of 36% from the same period last year. According to the report:

We had to do a double take when we saw this because these are absolutely terrifying numbers and are, to put it bluntly, scarier than Goldman’s “worst case scenario“; what’s worse this sudden collapse in China’s property market is taking place before Evergrande has even defaulted, an event which would lead to a glacial freeze in the property market as potential buyers hold off expecting liquidation firesales from the property giant in hopes of getting bargains. The problem is that in addition to being the world’s largest asset, China’s property market is also the world’s largest ponzi scheme, and without constant inflow of new capital it would implode, especially when factoring in the 90 million vacant apartment which just sit inert and which would promptly be dumped by anxious owners, flooding the market with excess inventory and sending prices crashing.

It didn’t take long for the market to notice what is going on and otherwise healthy property developers, which are in far better financial health than Evergrande, promptly collapsed: China Jinmao Holdings plunged as much as 10%, China Overseas Grand Oceans Group tumbled -7.9%, Sunac -3.7%, Country Garden Holdings -3%, Agile Group -2.8%, and so on.

But keep in mind that all of the above presupposes just one major default, that of Evergrande. Alas, it’s going to be far, far worse because in a reflexive toxic spiral, one property values fall, the entire property sector will collapse, leading to an epic bursting of a housing bubble that is order of magnitude greater than the US housing market was in 2007/2008.

As Bloomberg writes, Chinese property firms “may face a wave of defaults” next year if China Evergrande Group’s deepening debt crisis shuts access to a key source of funding and conditions don’t ease for heavily indebted borrowers. As we have documented extensively in the past month, there’s growing alarm that the liquidity crisis at Evergrande will spill over to other developers as President Xi maintains measures to cool the property market while maintaining China’s “three red lines” rules on property sector leverage (a new report from the FT today found that no less than half of China’s 30 top developers were in breach of at least one of said lines).

Fears of contagion risks intensified this week after a surprise default by Fantasia Holdings Group spurred a dramatic selloff in the offshore market.

That sent yields on China dollar junk bonds to 17.5%, the highest in about a decade, while Evergrande’s dollar bond prices sank to a record low. After plunging 80%, Evergrande’s HK-traded stock remains halted.

Distressed debt veteran Michel Lowy said in a Bloomberg TV interview that the nation’s developers are facing a “triple whammy” with dwindling access to offshore financing, “catastrophic” September pre-sales and a limited onshore banking market. Translation: both organic (i.e., operation) and external sources of cash have dried up.

That could spark a “large wave of defaults” if the offshore market remains shut for riskier borrowers going into next year, said Lowy, chief executive officer of his alternative asset manager SC Lowy. For dollar bonds – which in the coming Evegrande default will be at the very bottom of the pre-petition claims waterfall leaving them with negligible recoveries at best – the risk is that the increase in yields becomes indiscriminate and makes it impossible for developers to refinance maturing debt, triggering a succession of missed payments across the industry.

If they end up being locked out from the market and unable to rollover coming maturities, and with operating cash flow drying up, the only recourse is the dreaded liquidation firesale which would be the pin that bursts China’s housing bubble.

“Ultimately it’s a liquidity game,” said Lowy. “How many months can you survive until at some point the central government will relent and start releasing liquidity pressures on developers?”

And while much has been written about the turmoil in China’s dollar, or offshore bond market, the distress is starting to spread to the onshore bond market too. As Bloomberg notes, signs of strain in China’s $12 trillion domestic credit market after months of resilience may add to borrowers’ refinancing pressures. Stress levels rose in both the local and offshore bond markets in September, Bloomberg’s China Credit Tracker showed.

Take yuan-denominated bonds sold by Xiamen Yuzhou Grand Future Real Estate Development Co., Yango Group Co. and Aoyuan Corp. Group all of which plunged to record lows Friday while two local bonds from a Fantasia Holdings Group unit were briefly halted following sharp declines. Yango denied social media reports that one of its housing projects had been halted indefinitely, and said that it had sufficient cash to repay debt.

Needless to say, once the “stress level” in China’s far bigger, $12 trillion onshore bond market approaches levels currently at the offshore, property-dominated market, all bets are off.

Yet what makes the situation especially dire is that while Beijing would eagerly step in to bailout every insolvent bank and corporations until a few years ago, the one time when China’s economy desperately needs a bailout from the state is when Xi decided to be silent. Authorities have been allowing defaults to rise in recent years in order to curb moral hazard and encourage better pricing of risk in its debt markets. Property firms’ missed payments made up 36% of the record 175 billion yuan in onshore corporate bond defaults this year.

Yet if Xi allows the entire $62 trillion Chinese property sector to sink, the outcome will be orders of magnitude more dire than Lehman.

“It’s very difficult to see a solution right now,” said Hao Hong, head of research and chief strategist at BoCom International, who agrees that the Evergrande crisis could drag on. China’s Evergrande strategy would be to “let as many people bear the cost as possible,” to lessen the pain for any one individual, Hong said. However, if the broader population loses faith in what is China’s biggest asset while the market waits for a resolution – something the latest sales data confirm is already taking place – then the consequences will be catastrophic.

So while some observers have compared Evergrande’s woes to the epic collapse of Lehman, the truth is that the coming default is just the trigger event whose downstream effects could pull down the entire Chinese house of cards, something the latest housing data show is already in play. Because at the end of the day, no Ponzi scheme can continue if the participants lose faith in a favorable outcome, and at $62 trillion China’s housing sector is not only the world’s largest assets, it is also the world’s biggest Ponzi scheme. Which is why other experts have said this isn’t a Lehman Brothers moment— it could be far worse, if one views China’s gargantuan real estate sector as rotten to the core.