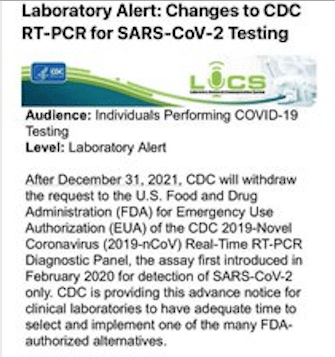 It has come out through a number of sources:

On 21st July, 2021 the CDC gave out a Laboratory Alert revoking the EUA for RT-PCR tests to detect SARS-COV-2.

It has yet to make great waves amidst those sources that actually report on this stuff – you can forget about mainstream media,

And yet here it is, on the CDC website. 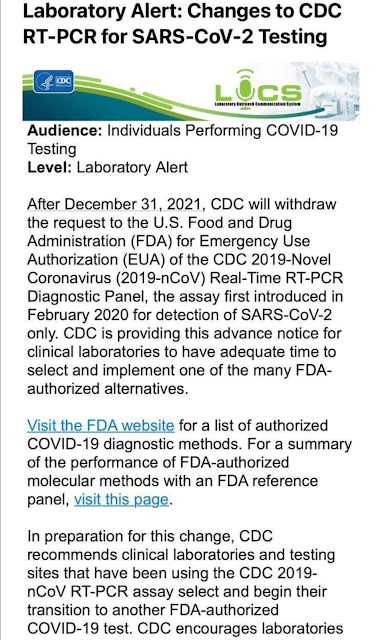 It is not “fake news” or a “conspiracy theory” although that is how the “factcheckers”, who don’t care about the facts, might characterise it.

By rights, as a lynchpin of the whole covid-19 narrative this should be revolutionary, and yet it won’t – I can almost guarantee it.

For a start the CDC has announced it “will withdraw the request to the U.S. Food and Drug Administration (FDA) for Emergency Use Authorization (EUA) of the CDC 2019-Novel Coronavirus (2019-nCoV) Real-Time RT-PCR Diagnostic Panel” on December, 31.

A lot of water can go under the bridge between now and then. All it takes is for the WHO to ignore the advice, for the mainstream media and governments –  to ignore this advice.

The PCR test was invented by Kerry Mullis, who won the Nobel prize for it.
Here he explains the test that he invented. Ironically, he died of pneumonia a couple of months before covid-19.
It was a German, Dr. Christian Drosten, who was behind the current use of the PCR test that was taken up by the WHO and all the world governments.

If we try to interpret the meaning of all this we are in the realm of speculation or, in the words of the mainstream detractors of the truth – “conspiracy theory”
To reiterate, I doubt very much that this significant news is going to mean diddly-squat, at least at present – there is too much hanging on it. They want to get the population vaccinated and will use the fear-tactics of increasing cases from a Delta strain that does not exist in the sense that it is being sold to us.