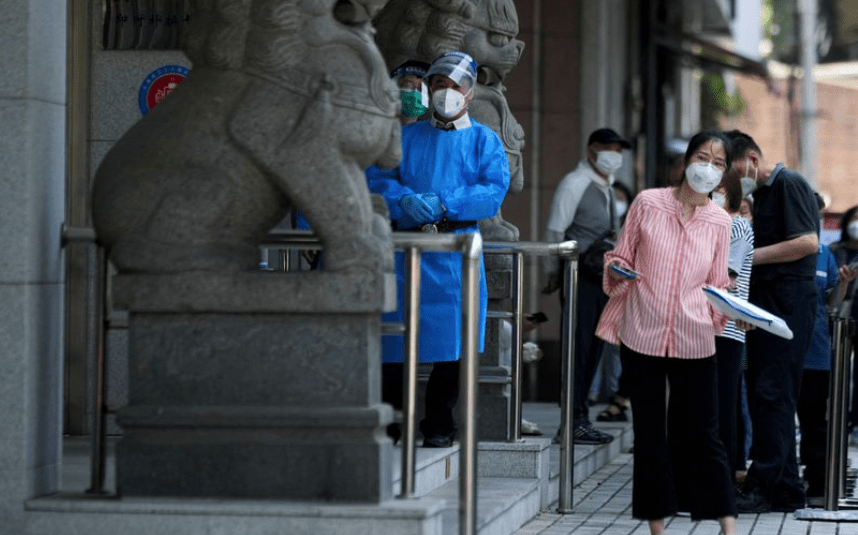 SHANGHAI, June 14 (Reuters) – A protest planned by hundreds of bank depositors in central China seeking access to their frozen funds has been thwarted because the authorities have turned their health code apps red, several depositors told Reuters.

The depositors were planning to travel to the central province of Henan this week from across China to protest against an almost two-month block on accessing at least $178 million of deposits, which has left companies unable to pay workers and individuals unable to access savings. read more

Rights groups have warned China could use its vast COVID surveillance infrastructure to stifle dissent. Without a green code on their smartphone app, citizens lose access to public transport and spaces such as restaurants and malls, as well as the right to travel across the country.

“They are putting digital handcuffs on us,” said a depositor from Sichuan province surnamed Chen, who declined to use his full name for fear of government retribution.

The Henan provincial government, the National Health Commission and the Ministry of Public Security did not respond to requests for comment.

After recent COVID outbreaks, some regions in China have asked travellers to register their plans online.

A man surnamed Liu, who lives in Hubei province, found that his health code turned red on the morning of June 12 after he registered the day before to travel to Henan.

Liu had planned to travel to a protest planned for Monday in the Henan provincial capital Zhengzhou, where he had hoped to get his money back. The protest would have been the latest among numerous such demonstrations in Henan in recent months.

More than 200 depositors were similarly blocked when their health codes turned red, according to members of a WeChat group.

It could not be ascertained if the change in code was intended to block the protesters or for another reason, but three depositors told Reuters they knew people who had registered to travel to Henan, who were not connected to the frozen funds, whose codes did not turn red.

Liu, who declined to give his full name for fear of government repercussions, said his child may not be able to go to school if his code does not soon revert to green.

“I can’t do anything, I can’t go anywhere. You’re treated as though you’re a criminal. It infringes on my human rights,” said Liu.

Wang Qiong, who lives in the central city of Wuhan, found her health code had turned red after she registered to travel to Henan on June 11.

“The police had my identity details from the last time I went to protest in April,” said Wang, who said she has lost access to 2.3 million yuan ($341,550).

BANK RUNS IN PROGRESS WITHIN CHINA 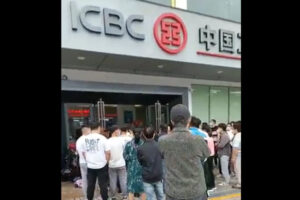 All banks in Shanghai have just restricted depositors from withdrawing money, causing people to line-up in panic at bank branches.  Banks in rural China have been delaying customer withdrawals for 60 Days, and media have been warned not to publish stories about this or risk prosecution for contributing to additional Bank runs!

Multiple sources  have confirmed deposits at the following six banks have been frozen:

It’s understood the banks with branches across the Henan and Anhui Provinces successively issued announcements in April, stating they would suspend online banking and mobile banking services due to a system upgrade.

At the same time, clients reported their electronic deposits in online accounts, mobile apps and third-party platforms could not be withdrawn.

This led to depositors rushing to local bank branches, only to be told they were unable to withdraw funds.

By late May, images emerged on Chinese social media of demonstrations at the front of numerous bank branches.

According to one user on the Chinese social media platform WeChat, the protests are ongoing but are rarely mentioned in Chinese press.

“It has caused widespread concern on the internet but the media attention is not high, the highest degree of concern is the four banks in Henan.”

The People’s Bank of China (PBOC) has responded to the rural bank run. It issued a statement on April 25.

Following the public protests and the PBOC statement, the China Banking and Insurance Regulatory Commission revealed it is investigating fraudulent activity carried out by the Henan New Fortune Group – the largest shareholder of the four banks listed above in the Henan Province. It’s understood the commission is working with police to investigate allegations that the Group colluded with bank insiders to misappropriate bank funds.

“According to a call recording between depositors and police officers, a company named Henan New Fortune Group Investment Holdings Co., Ltd. is suspected of illegally absorbing public deposits, and the amount is huge.”

Regardless of the cause, the developments raise serious questions about the health of China’s banks and its regulatory oversight. The more immediate concern, however, is the prospect of contagion, which is now seeing bank runs spread to bigger cities.

There’s evidence this is already happening.

In one of the only mainstream international media articles to report on the unfolding situation, local residents highlighted the seriousness of the situation and the likelihood of contagion.

From the Financial Times on June 9:

“Some depositors such as Xu have already lost trust in the system. The 39-year-old said he had withdrawn all of his deposits from 10 other small banks that had promised him an annualised yield of more than 4 per cent.

“Another depositor, a 30-year-old father, said he had placed more than Rmb900,000 in his village’s banks since 2020 at a return of 4.1 per cent. “I felt like being slaughtered,” he said, declining to give his name. He drove overnight to negotiate with the banking regulator in Zhengzhou, capital of Henan, in mid-May. “This is the money my wife and I have saved together since we got married. I had to lie to her that I was away for work.”

On Twitter, a video of a large line at an ICBC Bank in China (one of China’s largest state-owned banks) posted on Tuesday, June 9, suggest contagion is in progress.

Translated to English, the tweet reads “The bank card system is locked, and these people are here to unlock it. Massive runs are coming.”

Blogger, Jennifer Zeng, has reported major issues with withdrawing cash from banks in Shanghai in recent days. The uncertainty no doubt exacerbated by the prospect of more lockdowns as COVID cases again spike.

“All banks in Shanghai have restricted depositors from withdrawing money… A bank run is about to sweep China,” she said.

The lack of reporting about the clear signs of a bank run in China is somewhat surprising.

As HSBC China’s Xuefang Liu puts it, “The rise of China as a global economic power has caused concern that a crisis in Chinese banking could lead to a worldwide downturn similar to the Global Financial Crisis.”

While many analysts believed China’s banking system was widely immune to the Evergrande Crisis, cracks are beginning to emerge and should this bank run intensify, already volatile global markets could be faced with a black swan event even more significant than Evergrande.

In the anatomy of an economic crisis, a bank run is the point of no return.  China has just reached that point . . .

Bank runs occur when people scramble to withdraw cash from banks in fear of collapse. In the worst cases, banks’ liquid cash reserves are exhausted, not everyone gets their money and the bank defaults.

It’s a grim scenario which, fortunately, has occurred rarely in history.

The most significant bank runs in the United States took place during the 1930’s Great Depression. More recently, there were runs on numerous U.S. banks during the Financial Crisis in 2008.

In Asia, bank runs have also been rare. A run on Japanese banks in 1927 led to the collapse of dozens of institutions across the country. There was a banking crisis in Myanmar in 2003 which the country has never really fully recovered from.

But perhaps since the Great Depression, none has been as significant compared to what is seemingly unfolding in China right now.

The fact that some con artists scammed some small village banks into going broke would not ordinarily be a big deal, except in this case, the fear such revelations caused triggered mass withdrawal efforts at other small banks . . . which then had to DENY WITHDRAWALS to stay afloat.

Word of these denials spread and people started panicking, going to still more banks to get THEIR money out.   Then, more denied withdrawals.

Instead of containing this in the rural areas, China Regulatory Agencies “opened investigations” but did nothing to restore depositor money . . . which lead to more withdrawals from a wider geographic area.

Now, Banks in Shanghai are denying withdrawals.  That’s it.  That’s the “big one.”

I am told the Shanghai situation is deteriorating very rapidly today.    I was awoken at 3:03 this morning with Covert Intel sources saying there is panic in the streets in Shanghai over this.

Shanghai means banks on other nations ***may*** be affected.   It would likely go first to Banks in eastern Europe, already flummoxed by the Russia-Ukraine hostilities, then move west to London, then to New York.

It could all spread THIS WEEK.

Having proper cash on hand for yourself and your family to get by for a month or two, is now highly advisable . . . just in case.   Remember, cash is NOT for paying bills; it is for SURVIVAL.   Buying food and fuel to get to/from work.  That’s it.

A ding on your credit report is nothing compared to going hungry.   Don’t go hungry.  Have cash. 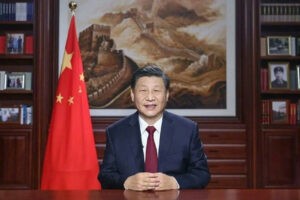 President Xi Jinping of China signed an order on the right to conduct a “special military operation” without declaring war.  It seems clear, he has Taiwan in mind.

Chinese President Xi Jinping, also general secretary of the Communist Party of China Central Committee and chairman of the Central Military Commission, recently signed an order to promulgate a set of trial outlines on military operations other than war, which will take effect on Wednesday.

The outlines have important meanings for the Chinese armed forces to carry out their duties and missions in the new era, as they will make innovations in ways military forces are used and standardize the organization and implementation of the armed forces’ military operations other than war, sources say.

Military operations other than war refer to operations that do not involve war, like disaster relief and humanitarian aid, as well as operations that limit the scale of the use of force like maritime escorts and peacekeeping, a Chinese military expert who requested anonymity said today.

The Chinese armed forces have been engaged in the fight against the COVID-19 pandemic since 2020. They also played a vital role in saving the people from natural disasters like earthquakes and floods, which often took place in China over the past years, the expert said.

By carrying out these operations overseas, in some cases, the Chinese troops can prevent spillover effects of regional instabilities from affecting China, secure vital transport routes for strategic materials like oil, or safeguard China’s overseas investments, projects and personnel, analysts said.

With six chapters and 59 pages, the outlines summarize experiences accumulated from past missions and practices, draw results from both military and civilian research, and standardize the basic principles, organization and command, types of activities, activity support and political work, providing the legal basis for the troops to carry out military operations other than war.

Atop all those matters, the issue of Taiwan seems to be the real focus of the President’s new Decree.

In the same way that Russia is now engaged in a Special Military Operation in Ukraine, China now has the legal basis for it to do the same with Taiwan.