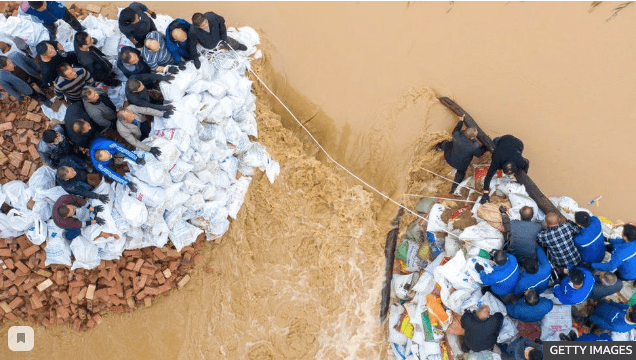 Heavy rainfall flooded Shanxi over the weekend. More than 120,000 people have been evacuated, and 60 of the 682 coal mines in the province have been closed. Industrial yards and manufacturing complexes have also been shuttered due to flooding.

The province is usually a dry area but record-breaking rain last week complicated things for the mining industry. This also comes at a time when Beijing has called on mining companies to boost output amid a nationwide power crunch.

As a result, Coal futures on the Zhengzhou Commodity Exchange jumped 12% to $218.76 per ton, a new record high, on Monday.

A devastating and widespread power crunch has hit China in recent months, resulting in as many as 20 provinces or about 66% of the country’s GDP have announced some form of power cuts. Due to the growing energy crisis, Goldman Sachs told clients last month that the energy crisis will severely impact the country’s economic growth.

For the fourth quarter, Citic Securities analysts told clients, China faces a gap of 30 million to 40 million tons of coal. This translates into reducing industrial power use by 10% to 15% in November and December. UBS Group AG said this would result in a 30% slowdown in activity in energy-intensive industries like steel, chemicals, and cement-making.

Beijing has also approved electricity prices to increase by 20% against the benchmark, compared with a current cap of 10%, allowing more power plants to economically produce power considering high costs for fossil fuels, such as coal, natural gas, and crude.

Southwest of Beijing, in Liaoning, known as the country’s rust-belt industrial region, local officials issued the second-highest level power shortage alert on Monday, the fifth in two weeks, warning of an energy shortfall that could reach 5 gigawatts (GW).

“The biggest power shortage could reach 4.74 gigawatts on October 11,” a notice issued by the Liaoning Provincial Industry and Informatisation Department said. This would indicate a shortage equivalent to 10%-20% of the total demand for power.

The biggest takeaway is that China’s electricity cuts could weigh down economic activity through the winter season and filter through supply chains as disruptions to production will be felt worldwide. There’s also the domestic issue that rising power prices will boost inflation, and as Citigroup’s Tracy Liao warned, “a short period of stagflation” in China could be seen.” She warned: “China may also export inflation as the disruptions ripple through global supply chains.”