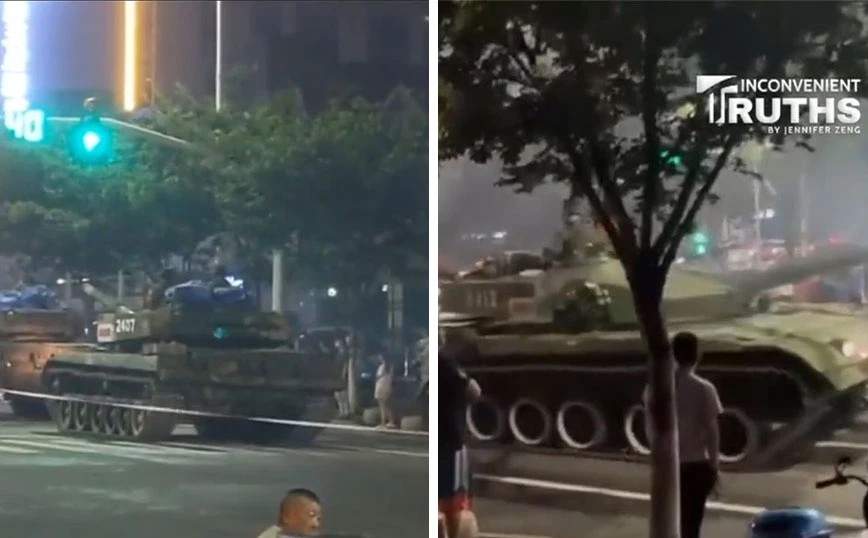 The China Communist Party deployed tanks overnight, to protect the Bank of China branch in Henan Province from the ongoing Bank Run.

Some of the Banks in Henan Province “froze” the accounts of Depositors back in April and have refused since then to allow any withdrawals of funds.

Yesterday, it was announced by the bank that people’s SAVNGS “are now INVESTMENT PRODUCTS and can’t be withdrawn.”

Yes, you read that right.  In short, it looks as though the bank simply STOLE all the depositor’s money to cover the bank’s bad business practices, bad loans, or outright theft,  and now the Communist Party has sent tanks to prevent people from storming the bank.

Crisis in China: Tanks took to the streets to protect banks from the people!

“$6 billion in deposits are gone”

A video showing Chinese tanks taking to the streets to protect banks is making the rounds around the world.

According to local media reports, riots broke out after the Bank of China branch in Hennan province issued an announcement that depositors’ savings were now “investment products” , so withdrawals could no longer be made.

According to the American website ndtv.com a branch of a bank is involved in a big scandal. About $6 billion in deposits are claimed to have disappeared, according to the South China Morning Post (SCMP).

Tanks are being put on the streets in China to protect the banks.

This is because the Henan branch of the Bank of China is declaring that people’s savings in their branch are now ‘investment products’ and cannot be withdrawn.

The banking scandal in question first came to light in April when the South China Morning Post (SCMP) reported that residents of Henan and Anhui provinces were unable to access their bank deposits due to a “system upgrade”.

Video from Hennan shows tanks blocking locals from reaching the bank branch, with the latter looking agitated at the presence of the armored vehicles.

#PLA #tanks on the streets in Rizhao City, #Shandong Province, #CCPChina . It was said that there is a navy training base nearby, and this happens every year.
Yet, right now… pic.twitter.com/bkaFu011Ou

China, Shandong Rizhao – Deployed tanks in the streets, for no known reason. pic.twitter.com/39ua45BXtp

Chinese Communist Party tanks took to the streets on Wednesday to “intimidate” protesters amid large-scale demonstrations in Henan province.

If nothing else, the incident is a grim reminder of the horrific massacre on June 4, 1989, in Tiananmen Square, when China’s leaders sent tanks and heavily armed soldiers to confront students demanding democracy and more freedoms.

Back in the present, despite promises that depositors in China’s Hennan province would get their money gradually starting on July 15, only a handful managed to make withdrawals.

On July 10, more than 1,000 depositors gathered outside a branch of the country’s central bank to protest.

In any case, the facts reveal, rather, that an unprecedented financial crisis is looming in the Land of the Dragon, with the banks, in fact, having “dried up”.

In the past, a lot of revenue for the Chinese state came from the real estate market and the various developers there…

However, many projects remain unfinished, many construction companies are not buying land, large companies such as Evergrande have faced and are facing problems, and all this results in government receipts hitting… rock bottom.

Meanwhile, a video was released online a few days ago in which Beijing Tsinghua University professor Zheng Yuhuang said that 2022 will be a difficult year for China — 4,600,000 companies in China closed in the first half of 2022.

And bankruptcies increased by 23% on an annual basis, while growth is sluggish. About 80 million young people remain unemployed.

During the large-scale protests in Hennan province over the release of frozen funds, white-clad men suppressed the demonstrations in front of the People’s Bank of China Zhengzhou (PBoC office), local media reported.

Hundreds of protesters have held several protests in the city of Zhengzhou, the capital of Henan province, but their demands have been ignored by the Chinese authorities.

The Great Debt Jubilee is picking up speed: China’s homebuyer mortgage boycott, which prompted Beijing to scramble to avoid a potentially devastating crash in what is the world’s biggest asset…

… is spreading, and according to Bloomberg, some suppliers to Chinese real estate developers are now also refusing to repay bank loans because of unpaid bills owed to them, a sign that the loan boycott that started with homebuyers is starting to spread.

In a jarring case study of what happens when a ponzi scheme goes into reverse, hundreds of contractors to the property industry complained that they can no longer afford to pay their own bills because developers including China Evergrande Group still owe them money, Caixin reported, citing a statement it received from a supplier Tuesday.

Similar to homebuyers who have taken a stand and refuse to pay for properties that remain uncompleted, one group of small businesses and suppliers circulated a letter online saying they will stop repaying debts after Evergrande’s cash crisis left them out of pocket.

“We decided to stop paying all loans and arrears, and advise our peers to decline any requests to be paid on credit or commercial bill,” the group said in the letter dated July 15, which was sent to the developer’s Hubei office. “Evergrande should be held responsible for any consequence that follows because of the chain reaction of the supply-chain crisis.”

As Bloomberg oh so perceptively puts it, “the payments protest is the latest sign of how a movement by homebuyers to boycott mortgages on unfinished homes in China is spreading to affect other sectors in the economy.”

Yes it is, and it’s also why Beijing should be freaking out (if it isn’t), because what is taking place in China is far worse than what took place in March 2020 when the global credit machinery ground to a halt, only back then it’s because there was no other option, now it’s a voluntary development and not even fears of reprisals from China’s ruthless, authoritarian, Lebron-beloved dictatorship is stopping millions of people from calling for a systemic boycott, one which can topple China’s entire $60 trillion financial system in moments.

It’s so bad, even Bloomberg has given up trying to put lipstick on this particular pig:

The development underscores a dilemma for Xi Jinping’s government as it grapples with who to bail out as the country’s property crisis deepens: Relief for some borrowers could prompt threats of non-payment by a whole host of others. While bending to demands for support could put a strain on state finances, ignoring them might lead to a spiral of defaults as more and more borrowers refuse to meet their obligations.

The mortgage strike, which kicked off in late June in a stalled Evergrande development in Jingdezhen, has rapidly grown to at least 301 projects in about 91 cities. The protests have exacerbated the country’s real estate woes and threaten to derail attempts to revive the market amid an economic slowdown. According to some estimates, millions of mortgages are now involved.

On Monday, we reported that as the pressure on Beijing rises to take measures, authorities urged banks to boost lending to builders to help complete the projects, and are also considering giving homeowners a grace period on payments.

Homebuyers’ refusal to pay mortgages stems from the widespread practice in China of selling apartments before they’re built. That practice imploded in the past year, as overleveraged Chinese developers were swept by a wave of insolvency, and have been in crisis mode over debt repayment as funds ran dry, and as construction stopped on more and more projects.

Chinese banks claims that the risks from the housing loan nonpayments are controllable, and so far have disclosed only 2.1 billion yuan ($311 million) of credit at risk. That, of course, is a lie: GF Securities Co. expects that as much as 2 trillion yuan of mortgages could be impacted by the boycott. That’s millions of mortgages.