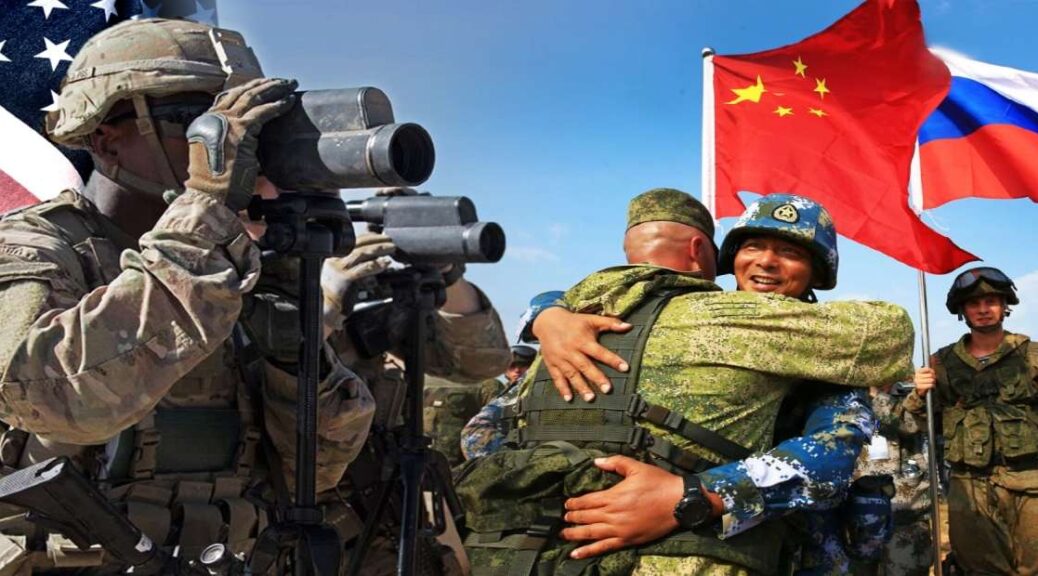 Russian Foreign Minister Sergei Lavrov stunned the collective West today when he declared that Russia “Has information that the US built two additional bio warfare labs; one in Kiev, the other in Odessa.  They have developed pathogens in those labs.

We will have to capture those cities to dismantle those labs to save the world from another pandemic.”

It also makes clear that Russia flatly believes it was the US through its foreign biolabs, that caused the COVID-19 pandemic, and may also be to blame for the outbreak of Monkeypox.

Now that Russia’s intention to take Kiev and Odessa is public and clear, one wonders if there will even be any country called “Ukraine” after this conflict is done?

“It’s time to fight together and knock her out”: China ends communications with US & upgrades strategic relationship with Russia – Shipyards on fire

China is beginning to cut communication bridges with Washington as it announced it is halting cooperation with the United States in several areas, including dialogue between top military commanders.

According to Beijing’s announcement, the first list includes 8 measures against the US.

Earlier, China announced sanctions on US House Speaker Nancy Pelosi and her close family members in response to their “evil” and “provocative” actions, the Chinese Foreign Ministry said.

China-Russia strategic cooperation will be strengthened

At the same time, Beijing announced plans to strengthen its strategic partnership with Russia after the incident in Taiwan

This was seen during the visit of the head of the Russian diplomatic department, Sergey Lavrov, to Cambodia for negotiations within the framework of ASEAN. In Phnom Penh, Lavrov met with his Chinese counterpart Wang Yi, who noted Russia’s adherence to “One China” principles. The identification of views on what is happening will form the basis for the future strengthening of the strategic partnership between the two countries.

“Beijing is ready to strengthen the strategic engagement with Russia, so that together we can more effectively defend the international system in which the United Nations plays a key role, as well as the order based on the rules of generally accepted international law,” said the Foreign Minister of China Wang Yi.

Moscow reacted negatively to the visit of the speaker of the US House of Representatives to Taiwan, considering it an “unnecessary provocation”. According to Russian diplomats, Washington thus seeks to divert attention from the internal problems of the United States and the situation in Ukraine.

Russian media: “The US has shown its teeth…” – It’s time to take them out!

Washington once again managed to prove to the whole world that it has no intention of giving up the status of “world ruler” and is ready, if necessary, to use military power. US interference in the internal affairs of sovereign states will continue in the future – despite any protests Russian media report and add:

Things happened on the Russian-American front that were certainly incomparable to the large-scale provocation carried out against China. Supported by aircraft carriers and fighters, Nancy Pelosi visited Taiwan.

The visit of a high-ranking lady from Washington to the territory of Taiwan, which is recognized by almost no one (including the United States) as a “sovereign state”, initially looked like a slap in the face to Beijing. But things turned out even worse for China. From the outset, Pelosi declared from Taipei that “China is a threat to Taiwan and global democracy as a whole.” It is clear that then the United States cannot “stand aside”.

And then she expressed her intention to meet with the local leader of the unrecognized “state” as soon as possible. And by the way, Grandpa Joe has already gushed that he really “respects” Grandma Nancy’s decision to go to Taiwan. And this despite the fact that this reckless act almost provoked a more dangerous armed conflict

The “point of no return” in Russia’s relations with the “collective West” did not pass on February 24 of this year, but in 2014, after the annexation of Crimea. And this confrontation, which has almost turned into open war, will continue until our complete victory.

Ukraine, Taiwan, Serbia, the Middle East are just different fronts of this war. It was no coincidence that N. Pelosi welcomed a crowd of madmen in yellow and black masks in Taipei. And Pavel Klimkin, the former foreign minister of the “independent” country, with great passion, painted his “vision” of this lady’s trip as a conscious show of strength on the part of the United States:

The United States showed its teeth twice: it eliminated the leader of al-Qaeda and made a visit of the president of the US Congress to Taiwan. Those teeth looked good in the Kremlin. The message is very simple: we fear no one and will destroy all who threaten the security of the United States…

“We will do it! Because we can and there will be no repercussions for it!” Sooner or later they will try to kill everyone who is considered a “threat”.

It is time for Moscow and Beijing to finally understand that this will inevitably happen, unless after the next “show of teeth” those same teeth thin out enough. Even if they are completely uprooted.

Russia and China are forced to become major naval powers

The Russians continue to stress the need to update naval doctrine for both Russia and China.

“The great achievements of Admiral Zheng He’s Chinese fleet have long remained in the history of the Ming Dynasty. However, in the 21st century, Beijing had to accelerate the construction of warships and submarines.

The width of the Taiwan Strait at its narrowest point is 130 kilometers. To overcome this short distance and return the rebel island ruled by a pro-Western regime, an air force and a powerful navy with numerous landing craft and minesweepers are needed to clear the water area.

In addition there is the strategically important Strait of Malacca, which connects the Pacific Ocean with the Indian Ocean, if blocked by the combined navies of the Anglo-Saxon AUKUS bloc, China will be in trouble. He therefore needs an even more powerful fleet of aircraft carriers, which he is building with enviable tenacity and speed. In addition, China still has many territorial disputes with all its neighbors in the Southeast Asian region.

We remind you that the Strait of Malacca is a narrow stretch of sea, 805 km long, between the Malaysian peninsula and the Indonesian island of Sumatra. It is one of the most hubs on the planet and the main shipping passage between the Indian and Pacific oceans, connecting the economies of China, South Korea and Japan with India and Pakistan.

So it turns out that the “great land power” China needs to build and maintain a huge merchant and military navy.

Another “great continental power” Russia, surprisingly, has similar problems. So, for example, it would be nice to carry out a landing operation near Odessa to take control of this strategically important city. We even have our own “unsinkable aircraft carrier” in the Crimea, just like China has in the Taiwan Straits. However, there is no amphibious fleet in the Black Sea capable of carrying out such an operation in the face of Harpoon and Neptune anti-ship missiles.

Russia also has its own “Malacca” – the Kuril Islands, located at a significant distance from the main powers of the region, which are objectively dominated by the rivals, the Japanese Naval Self-Defense Force, which dreams of taking the “northern lands” and US Navy.

In addition, sea transport is used to supply the settlements located from Murmansk to the Bering Strait. It is impossible to supply the Far Eastern islands of Sakhalin and the Kuriles by any other means than sea transport. It is also worth mentioning the Kaliningrad region, which, after the imposition of Western sanctions, has de facto turned into an “island”. The life and economy of the enclave is connected with sea trade with the most important cities of Russia, St. Petersburg, Ust-Luga, Rostov-on-Don, Novorossiysk, Vladivostok and others.

Even the deep inland cities of Zelenodolsk, Nizhny Novgorod and Komsomolsk-on-Amur are closely connected to the sea, as ships and submarines have been or are being built there. Russian grain, coal, other natural resources, metallurgical and oil refining products, etc. are exported through seaports. Also, products from Central Asian countries pass through our ports. Imports from China and other countries return in containers by sea to Russia.

Separately, it is worth noting the increased role of maritime trade in the issue of Russian oil exports. After the embargo on its market was imposed by the countries of the collective West, it was necessary to urgently seek sales in Southeast Asia. India has become the largest alternative buyer of domestic petroleum products, taking Russian oil at a discount. Since there are no major pipelines to India and none are expected, these export flows are also by sea.

We face similar problems in the natural gas market. Europe intends to significantly reduce the consumption of Russian blue fuel. The only logical alternative is to build new gas liquefaction plants and ship it to the Southeast Asian market by sea in LNG tankers. But exporting oil and LNG requires a suitable fleet of tankers.

In other words, Russia is not a “land power” in principle, and the importance of sea trade for us will constantly increase. This means that our country needs its own powerful navy capable of protecting the interests of the Russian Federation in the oceans. Otherwise, we will face the same problems that China has.

This is an objective reality recently recorded personally by President Vladimir Putin in the updated Naval Doctrine,” the Russians conclude.