I recommend following the links

A thought-provoking new Security Council (SC) report circulating in the Kremlin today first noting President Putin was informed this morning by Defense Minister General Sergey Shoigu that Russian military forces have fully captured the key Donbass Black Sea port-city of Mariupol, says, however, that more than 2,000 militants, loyal to Kiev, still remain entrenched at the Azovstal steel plant in the city—in speaking for these besieged Ukrainian neo-Nazis, it saw Svyatoslav Palamar, the deputy commander of the neo-Nazi Azov Regiment, releasing a new video address stating that these militants were ready to leave the plant with the support of an “unspecified third party”, and him demanding that these fighters keep their personal weapons, as well as be able to evacuate their wounded and fallen comrades—a demand immediately met by President Putin ordering that an “unreasonable” assault on the Azovstal industrial zone in Mariupol be canceled, and demanding that the site “be blocked so that a fly does not fly by”, with him explaining: “This is the case when we must think – that is, we must always think, but in this case even more so – about saving the life and health of our soldiers and officers…There is no need to climb into these catacombs and crawl underground through these industrial facilities…Once again, we invite all militants who have not yet laid down their arms to do so”.

During the meeting, this report notes, Defense Minister General Shoigu revealed to President Putin: “At the time of encirclement, the Ukrainian troops, nationalist formations and foreign mercenaries, who were also in large numbers totaled about 8,100…During the city’s liberation, over 4,000 of them were eliminated, 1,478 surrendered while the remaining force of over 2,000 militants is blocked at the Azovstal industrial site”, then he reported: “As for those who have entrenched at the Azovstal plant, they are totally blocked there along the entire perimeter…We need about three to four days to complete this work at Azovstal…We prepared about 90 buses and 25 ambulances for them, naturally, bearing in mind that the situation was constantly distorted, and we installed video cameras…The situation was broadcast actually live to our command center…No one exited Azovstal…In the past several days, the Russian forces have been able to evacuate over 100 civilians from the plant’s adjacent territories…Currently, the situation in the city of Mariupol is calm and allows starting measures to bring order, provide for residents’ return and establish peaceful life”.

With Mariupol now having fallen during the “Special De-Nazification Operation” to liberate Ukraine, this report continues, Director Alexey Polishchuk of the Foreign Ministry Second CIS Department declared: “The special military operation will end once its tasks are fulfilled…Among them are the protection of the peaceful population of Donbass, demilitarization and denazification of Ukraine, as well as the elimination of threats to Russia coming from the Ukrainian territory due to its colonization by NATO members”—a declaration joined by Foreign Ministry spokeswoman Maria Zakharova revealing that Moscow handed over a draft settlement agreement to Ukraine on 15 April, but still has not received any reaction, and saw her telling reporters: “It was said today that a new set of proposals were handed over to the representatives of the Kiev regime, involved in the negotiations process…I would like simply to reveal the date when these positions were handed over by the Russian side…It was Friday…Today is Wednesday…There has been no response up to this day…This should give you an idea of how the Kiev regime’s negotiations team behaves…How they view the negotiations process in principle, and whether it is possible to believe them or not when they speak about their desire to hold negotiations…There is no trust in their words…Many things, stated both in public space and at the negotiations table, have been immediately debunked by Kiev, sometimes within an hour or even 15 minutes”.

Instead of responding to the draft settlement agreement to end this conflict, this report notes, this morning Ukrainian President Volodymyr Zelenskyy said he is awaiting deliveries of heavy military hardware from the Western colonial powers in the near future, and stated: “I confirm today that relations with the West have warmed, and we see attempts to increase support with regard to heavy hardware as well…We are waiting for it and think that it is true, we will have it…As for details, I am not ready to openly speak about it…But there are things that we look forward to, things that we look forward to very much…We have received a signal that we will have a chance to receive them in the near future”—a statement swiftly followed by NATO member Turkey, the second largest NATO power after the United States, sending out Foreign Minister Mevlut Cavusoglu to angrily proclaim: “There are countries within NATO that want the Ukraine war to continue…They see the continuation of the war as weakening Russia…They don’t care much about the situation in Ukraine”.

While the attention of the American people is being directed by their fake news leftist media towards Russia, this report details, they are failing to notice the virtual tsunami of scathing articles appearing near hourly in China like “Washington’s Geopolitical Appetite Has Been Growing”, “Unmasking Vicious Cycle Of Wicked U.S. Behavior On World Stage” and “U.S. Like Lord Voldemort Is Destroying International Order”—the dire significance of which is now being explained by Valdai Discussion Club top Asian geopolitical analyst Dmitry Kosyrev, who, in his just released warning open letter “China Has No Illusions And Is Preparing For War With The US”, notes:

The daily “bombing” of America that the Chinese media is now doing is not necessarily verbal.  Sometimes they are pictorial.  For example, to draw the United States in the form of Voldemort , destroying the world order, and the American allies as a crowd of zombies serving the owner, you need to know the history of Harry Potter well and still be very angry.

Get angry because China is well aware that the Ukrainian provocation of the West against Russia is simultaneously directed against Beijing.

“Years from now, when people research history in search of who was right and wrong in the Russian-Ukrainian crisis, they will see through the essence of the current words of the West,” the author of the article in People’s Daily begins the conversation. “ US behavior is one of the most ridiculous and shameless incidents that have happened in the world at the beginning of the 21st century.”  And then he talks in detail about how the American military-industrial complex works, whose shares are now briskly going up.

But this is something from a series of obvious, but less obvious – that both the West and all others have moved away from the first shock that occurred on February 24, and began to sort out the question “what to do next and who is the real opponent.”  And somehow it turns out more and more noticeably that the enemy is, in any case, China.

It can be assumed that in February everything did not go according to the American scenario.  Perhaps we should have been quiet, and then (probably in March) some completely different military operations were planned on the territory of Donbass – and not only there.  Although even less pleasant scenarios are circulating for us.  Moscow ‘s warning response was a surprise, and at first the West, in touching unity with Kiev , came to its senses, confining itself to sanctions and the creation of propaganda phantoms.

We all know them: Ukraine resists and wins, Russia commits genocide after genocide, Putin is not told the truth, etc.

Accordingly, the media of the Democrats and the like behaved, where there was and is nothing but this stupid propaganda.  But gradually more systemic assessments arose – the very ones that are read in Beijing about what kind of world and who needs it.

And here is a very typical headline for the growing wave of such publications in the United States: “To resist China means to defeat Russia.”

So the new National Defense Strategy of the Pentagon confirms: no wars in Eastern Europe should distract from the main threat, which is in the Pacific Ocean . In any case, the Ukrainian story is inextricably linked with this real struggle between the two giants.  And accordingly, with the question of what should be tomorrow’s world.

The struggle for the correct outlines of tomorrow’s world will not go away – but after all, there must be some neutral platforms on which different great powers will have to agree on something.

That is, in fact, the Western world will not care, and the current hysterics about its preservation and strengthening will have to stop.

China and Russia, of course, are eyeing this discussion with interest.  Although emotions always get the better of us, and we both want to disincarnate Voldemort.  But this only happens in fairy tales.

During the first official phone call between US Secretary of Defense Lloyd Austin and Chinese Defense Minister Wei Fenghe this week, this report continues, Defense Minister Fenghe demanded that the United States “stop conducting military provocations at sea and to stop using the Ukraine issue to smear, frame or threaten China”—a demand quickly joined by Chinese United Nations Ambassador Zhang Jun blasting the Western colonial sanctions imposed on Russia, with him declaring: “Arbitrary freezes of foreign exchange reserves of other countries also constitute a violation of sovereignty, and is tantamount to weaponizing economic interdependence…Such practices undermine the foundation of world economic stability, and bring new uncertainties and risks to international relations”—in knowing that the godless Western colonial powers will soon target them for destruction, today it saw the Central Bank of Israel revealing it is diversifying the country’s foreign exchange holdings by adding the Chinese Yuan alongside three other currencies, while slashing the share of the US Dollar and the Euro—sees this further move against the US Dollar coming at the same time top American mortgage lender Fannie Mae is warning that the US economy is facing a “modest” recession next year—all of which explains why it’s being reported today: “President Joe Biden has accomplished in just 14 months what many thought was impossible — surpassing President Jimmy Carter as the most incompetent steward of the American economy”.

Among the latest urgent war bulletins issued by the Ministry of Defense (MoD), this report concludes, the most concerning is that Chilean-American blogger Gonzalo Lira was last heard from in Ukraine almost a week ago, and was reporting from the Ukrainian city of Kharkov where he has been a critic of President Volodymyr Zelensky and of Ukraine’s conduct during the conflict—in response to this concerning news it saw New York Times contributing journalist Max Blumenthal posting the message: “If @realGonzaloLira has indeed been disappeared by Ukraine’s SBU, he joins a long list of dissidents, leftists, human rights activists, and local officials kidnapped, tortured and even assassinated by Zelensky’s death squads – and with Kiev’s open support”, that was followed by another posted message saying: “Tweets from Ukrainian Nazi Sergei “Botsman” Korotkikh, who has now made his account private, say Gonzalo Lira has been kidnapped, tortured and might be beheaded…Impossible to verify, but this is plausible…SBU is known to torture and murder its victims”—and whose other most notable urgent war bulletins include:

“Operational-tactical and army aviation aircraft of the Russian Aerospace Forces struck 20 sites of the amassment of Ukrainian manpower and military hardware near the communities of Shnurki, Novonikolayevka and Aleksandrovka overnight”.

“In the area of Donetskoye, a Ukrainian Tochka-U tactical missile was shot down”.

“Units of the Luhansk People’s Republic reached the border of the Kharkiv region and cleared the road to the capital of the region”. 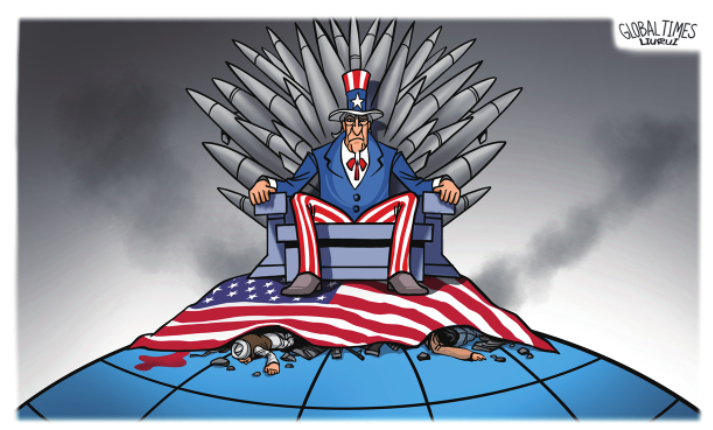 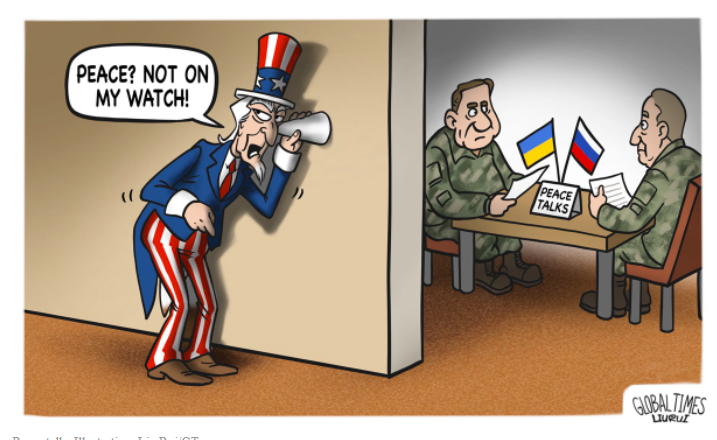 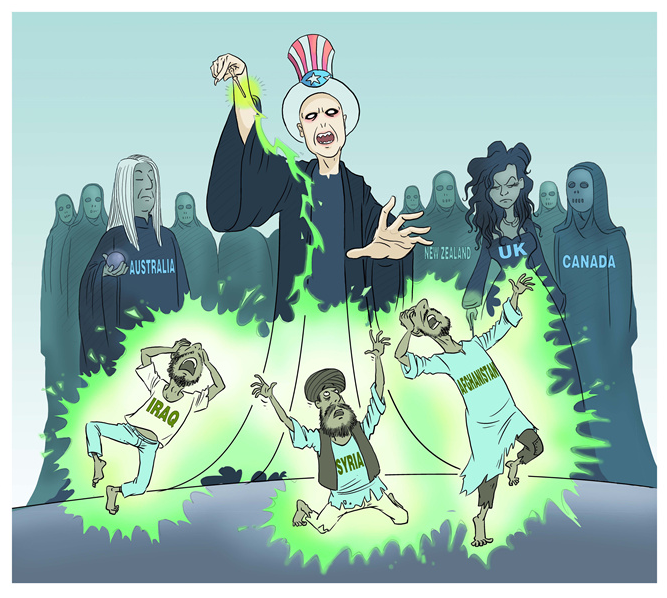