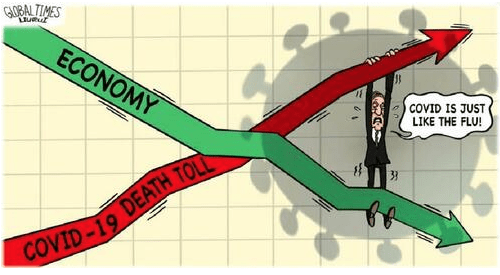 Make of this what you will

In a stunning admission, according to estimates from the government’s top health authority, nearly 37 million people in China may have been infected with Covid-19 on a single day this week.

This is a shockingly stark divergence from the extremely low ‘official’ case count (which reported just 62,592 symptomatic) and utterly dwarfs the previous global daily record of about 4 million, set in January 2022, as Omicron spread…

The new data was provided in a closed-door meeting by Sun Yang, a deputy director of the Chinese Center for Disease Control and Prevention, on Wednesday.

According to two people familiar with the matter, The FT reports that Chinese officials estimate about 250mn people or 18 per cent of the population were infected with Covid-19 in the first 20 days of December as Beijing abruptly abandons its Zero-COVID strategy that for almost three years has crushed economic growth (and citizens’ freedoms).

As @MrSeanHaines noted on Twitter, it’s amazing the 180 Chinese state media have done on their Covid messaging of late.

“Omicron is not flu.”

Bloomberg notes that it is unclear how the Chinese health regulator came up with its estimate, as the country shut down its once ubiquitous network of PCR testing booths earlier this month. Precise infection rates have been difficult to establish in other countries during the pandemic, as hard-to-get laboratory tests were supplanted by home testing with results that weren’t centrally collected.

Sun said the rate of Covid’s spread in the country was still rising and estimated that more than half of the population in Beijing and Sichuan were already infected, the people briefed on the meeting said.

This is extremely notable obviously as while China is experiencing its first real wave of infection, it is massive and will likely mean almost the entire nation will have natural immunity in two to three months… which will allow the economy to restart fully.

Chen Qin, chief economist at data consultancy MetroDataTech, forecasts China’s current wave will peak between mid-December and late January in most cities, based on an analysis of online keyword searches.

The lack of information made public by China on its Covid wave has led Washington and the World Health Organization to push Beijing to be more transparent on case counts, disease severity, hospital admission figures and other health statistics that have been made widely available by other countries.

“It is very important for all countries, including China, to focus on people getting vaccinated, making testing and treatment available and, importantly, sharing information with the world about what they’re experiencing,” U.S. Secretary of State Anthony Blinken said at a Dec. 22 press briefing.

“It has implications not just for China, but for the entire world. So we would like to see that happen,” he added.

Finally, we note that The Epoch Times reports ten famous Chinese medical experts passed away soon after Beijing lifted its zero-COVID policy. Most of them were members of the Chinese Communist Party (CCP), and two were allegedly involved in the live organ harvesting of prisoners of conscience.

While the Chinese media reported the deaths resulting from “illness,” they didn’t provide additional information, causing Chinese netizens to speculate.

A Chinese netizen commented, “It is indeed a bit strange that they died in December one after another—especially on the 16th, 17th, 18th, and 19th.” Another said: “They all died of ‘illness’ without specific reasons. It’s hard not to contemplate why.”