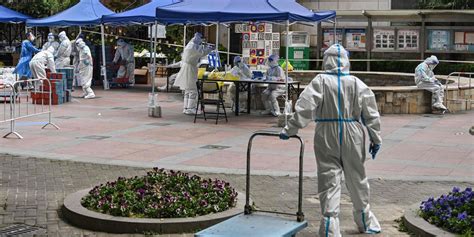 Experts are warning China’s recent string of COVID-19 lockdowns is about to send another shock through global supply chains.

At least 373 million people—in cities that represent roughly 40% of China’s gross domestic product—have been affected by the most recent wave of lockdowns across China, Reuters reported last week.

The strict lockdowns have left some residents desperate for food and led to viral videos of Shanghai residents screaming from the windows of their high-rise apartments. And with Chinese President Xi Jinping doubling down on the country’s zero-COVID approach, what happens in China isn’t likely to stay there. Global supply chains are set to take a hit.

After all, Shanghai is home to the world’s largest port, and although it has largely remained open, trucks are struggling to unload cargo due to strict permit regulations, causing shipping containers to stack up.

“Even with air and ocean ports open, the length of the shutdown could make this iteration the most significant logistics disruption since the start of the pandemic,” the shipping company Freightos said in an update to clients this week.

That’s rough news for the American consumer, given the fact that the U.S. imported more goods from China than anywhere else in the world over the past decade. In 2020 alone, the U.S imported roughly $435 billion worth of goods from Chinese cities and sent another $125 billion to the country in exports, according to the Office of the United States Trade Representative.

That means, once lockdowns end, there’s going to be an “overwhelming movement of goods” that cripples supply chains, Jon Monroe, an ocean shipping and supply-chain expert who runs Jon Monroe Consulting, told FreightWaves on Friday.

“It’s probably worse than Wuhan. You’re going to have a lot of pent-up orders,” he said.

Lars Jensen, the CEO of the shipping industry adviser Vespucci Maritime, said that he doesn’t see any immediate end in sight to production and logistics disruptions in China either.

“The supply-chain situation in Shanghai continues to worsen. The port is running out of capacity for some types of cargo as importers cannot collect their goods,” Jensen wrote in a Friday post. “With the outbreak in Guangzhou also leading to shutdowns there, the impact on export volumes out of China will grow larger.”

Investment banks are also sounding the alarm on the potential impact of the strict lockdowns in China. In a note downgrading Chinese GDP growth expectations, UBS said even more localities have initiated “de facto lockdowns” since finding COVID-19 cases.

The economists added that they believe the Chinese government is unlikely to adjust its current policy anytime soon, even if officials are working to reduce transport blockages and production disruptions, meaning supply-chain chaos is likely to continue in the near term.

The effects of the widespread lockdowns in China are already being felt as far as Europe, according to the European Union Chamber of Commerce in China. The organization sent a letter to the Chinese government urging officials to revise their policies last week, arguing the effects of the lockdowns have already begun to affect European suppliers.

A flash survey from the German Chamber of Commerce in China conducted in the first week of April found that roughly half of German companies’ logistics, warehousing, and supply-chain operations were “completely disrupted or severely impacted by the current COVID-19 situation in China,” Reuters reported.