“China’s military has not returned our numerous calls”

US Secretary of State Anthony Blinken today accused China of “irresponsible actions” by cutting off key channels of communication with Washington, and said Beijing’s recent actions in Taiwan showed it was moving away from the practice of peaceful problem-solving and moving towards direction of the use of force.

His comments came as Chinese aircraft and warships conducted a mock attack drill on Taiwan today, officials from Taipei said, as part of Beijing’s actions following a visit by US House Speaker Nancy Pelosi earlier this week.

China’s retaliation by suspending bilateral processes in eight key areas, including defense, drugs, cross-border crime and climate change, is among the moves that will punish the whole world, not just the US, he said. Blinken at a press conference in Manila.

“These include several military channels, which are critical to avoid potential misunderstanding and crisis,” he said.

“The suspension of climate cooperation does not punish the US, it punishes the world, especially the developing world. We should not be held hostage to cooperation on issues of global concern because of the differences between our two countries.”

Tackling climate change has been an important area of ​​cooperation between the two superpowers.

Blinken said the U.S. was listening to allies expressing concerns about what he called China’s dangerous and destabilizing actions around Taiwan, but noted that Washington would remain steadfast in its handling of the situation.

The US secretary said that at a regional meeting in Cambodia he had conveyed to Chinese Foreign Minister Wang Yi the message that the US is determined to keep communication channels open in order to avoid miscalculations.

“So let me be clear, the US does not believe it is in the interests of Taiwan, the region, or its own national security to escalate the situation, ” he said.

“Maintaining dialogue is arguably even more important when we are going through a period of high tensions… We seek to de-escalate these tensions. And we think dialogue is a very important element in that.”

“China’s military command does not communicate with the US”

China’s military command is not communicating with the US , Politico reported, amid tensions that have erupted in Taiwan following a visit by Speaker of the House N. Pelosi and the Chinese responding with live-fire drills.

During the week, top Chinese military officials did not return numerous calls from their American counterparts, including Defense Secretary Lloyd Austin and US Chief of Staff General Mark Milley, according to its sources.

The publication recalls that the last contact between the chiefs of staff of the US and China’s armed forces took place on July 7, when a teleconference was held between the US Chief of General Staff and the chief of the Joint Chiefs of Staff of the People’s Liberation Army of China.

As Politico points out, the US military leadership is ready to communicate “even with potential adversaries like China” in order to prevent a military conflict.

China announced the temporary suspension or cancellation of eight cooperation mechanisms with the United States due to the visit to Taiwan by House Speaker Pelosi, who holds the third-highest position in the US government hierarchy.

The Chinese canceled meetings of representatives of the military departments, ended direct lines of communication between regional military commands, suspended cooperation under the maritime security mechanism, as well as the fight against climate change and the illegal drug trade.

Chinese Foreign Ministry: Taiwan is not part of the US, but Chinese territory

Chinese Foreign Minister Wang Yi said today that Taiwan is not part of the US but Chinese territory, in the latest episode of a diplomatic firestorm against US policy following US House Speaker Nancy Pelosi’s visit to Taiwan.

The US has engaged in “sophistry” on the Taiwan issue, and China’s actions in Taiwan have been fair, appropriate and legal, and aimed at safeguarding the country’s sacred sovereignty and territorial integrity, Wang said during visit to Bangladesh.

China’s armed forces will henceforth conduct “regular” military drills on the eastern side of the “middle line” of the Taiwan Strait, Chinese state television reported today.

The “median line” of the Taiwan Strait, which separates the island from mainland China, is an unofficial line of control that military aircraft and warships from either side do not normally cross.

The “median line” has never been legally recognized and is an “imaginary” line drawn by the US military for their war actions.

How close Chinese fighter jets came to Taiwan and Japan

China’s show of military might, which followed US House Speaker Nancy Pelosi’s visit to Taipei, should be drawing to a close, at least according to Beijing’s official announcement of the end of Chinese military training on August 7.

The Chinese military exercises and live-fire shootings that took place in the Taiwan area in the past 24 hours are, however, a turning point in the developments, for reasons not only quantitative but also geographical, as it was the first time in history that such Chinese operations took place so close not only to the Taiwanese shores but also to some of the islands west of Japan, as alleged.

The opinion is expressed, moreover, that these high schools mark the beginning of a new, more aggressive phase in the way Beijing deals with Taiwan and other US allies in the region (see Japan, etc.).

Over the past five days, China has sent fighter jets and drones to areas near Taiwan and islands west of Japan.

Taiwan’s armed forces complain that within this time period of the last five 24 hours, Chinese aircraft “violated” the air defense zone (“Air Defense Identification Zone”) of Taipei and the middle line of the Taiwan Strait (“Taiwan Strait median line ») a total of over 131 times.

According to what Taiwanese forces claim, at least 105 Chinese fighter jets and other types of aircraft took part in these “violations”.

It is emphasized, moreover, that the number of these “violations” is characterized as “unprecedented” even for a region such as that of Taiwan, which has experienced tensions in the past.

However, in the last 24 hours, Japan has also made complaints about Chinese “provocations”.

The Chinese armed forces, for their part, claim that the military drills held these days in the north, east and southwest of Taiwan were intended to test their ability to carry out land and sea offensive operations.

As noted, however, these live-fire military gymnasiums could also signal a new pattern of more regular and more aggressive “violations” on Beijing’s part.

It is recalled that at least 11 Chinese missiles reportedly fell into the seas north, south and east of Taiwan last Thursday, August 4, with the Chinese armed forces even declaring that their shots “accurately hit their targets” and Japan on the other hand to speak of Chinese missiles landing in its own Exclusive Economic Zone for the first time in history. 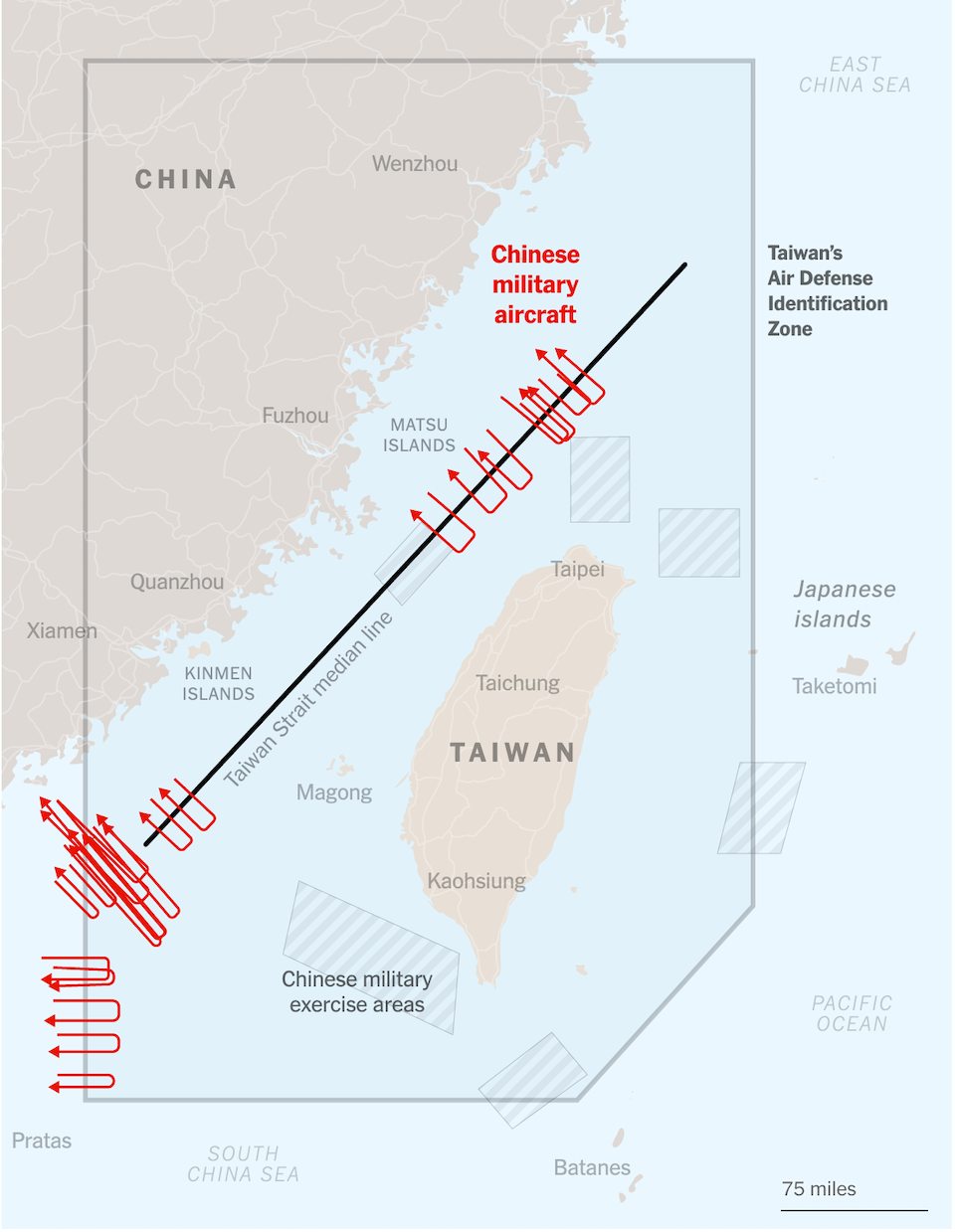 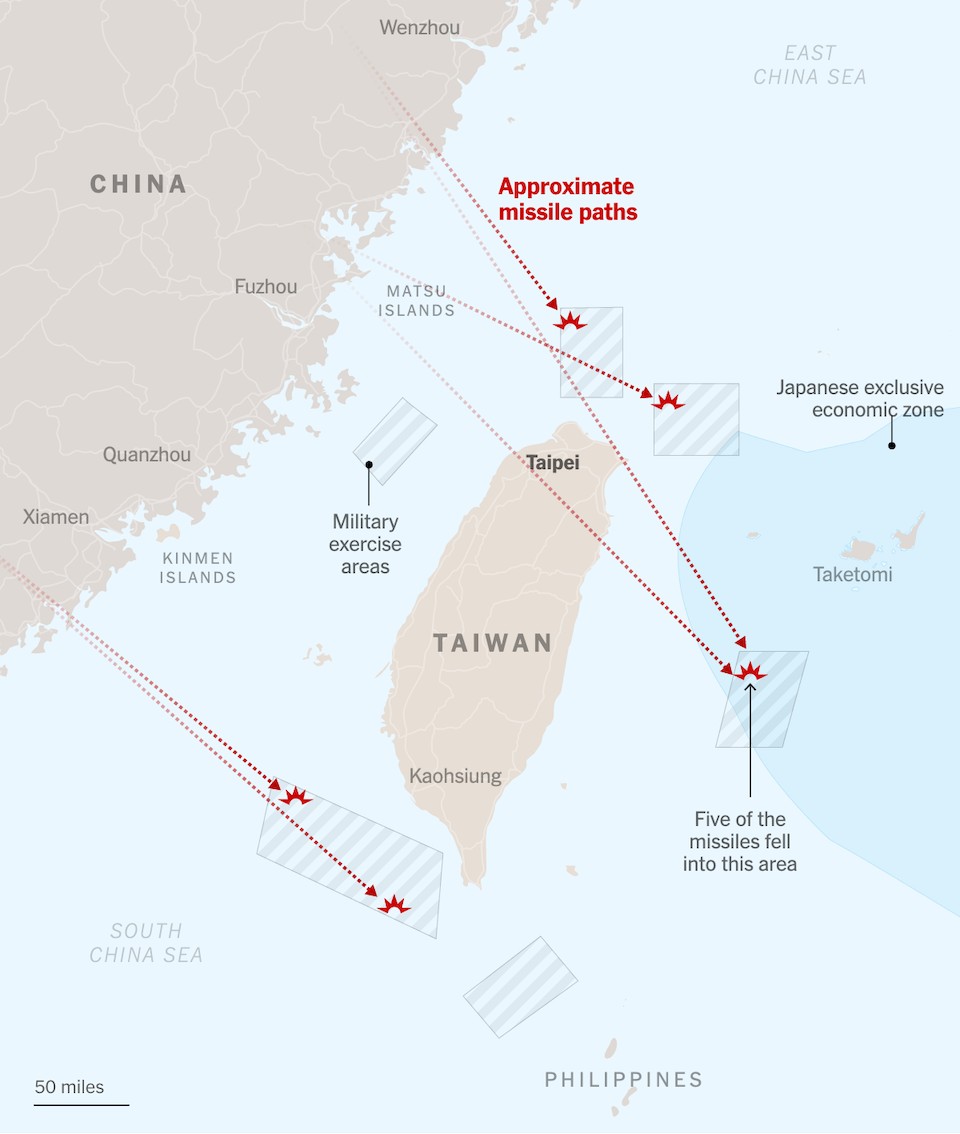 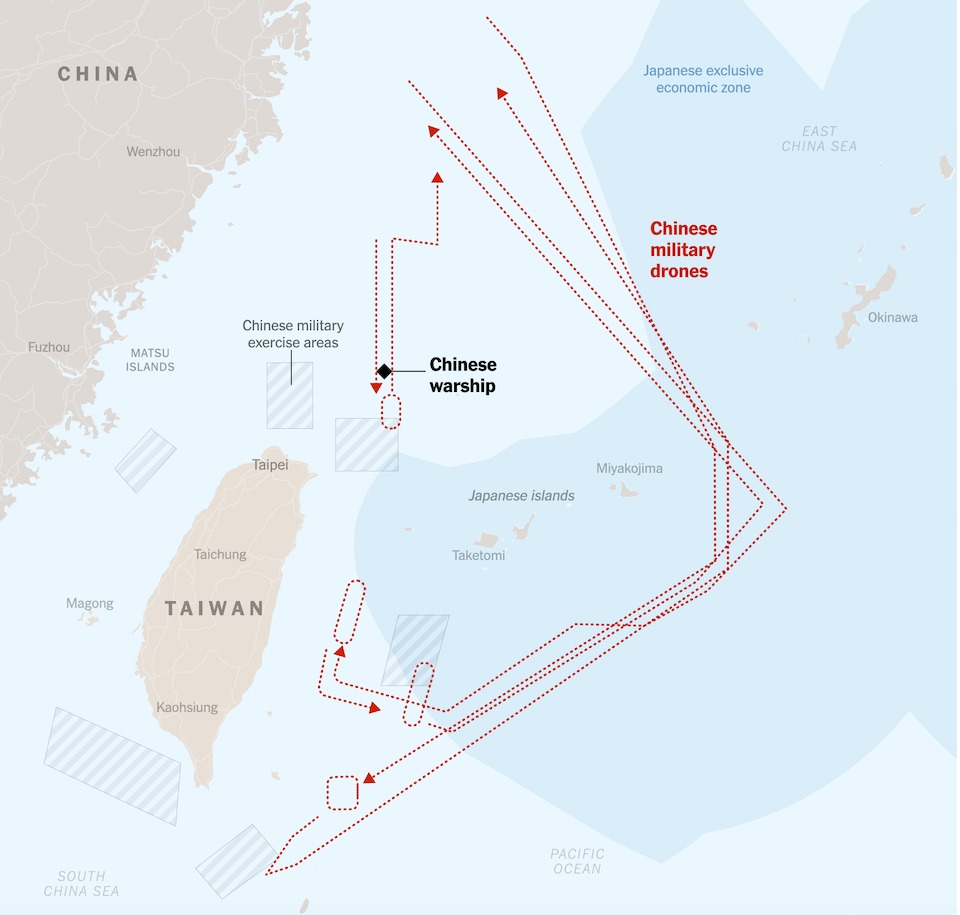 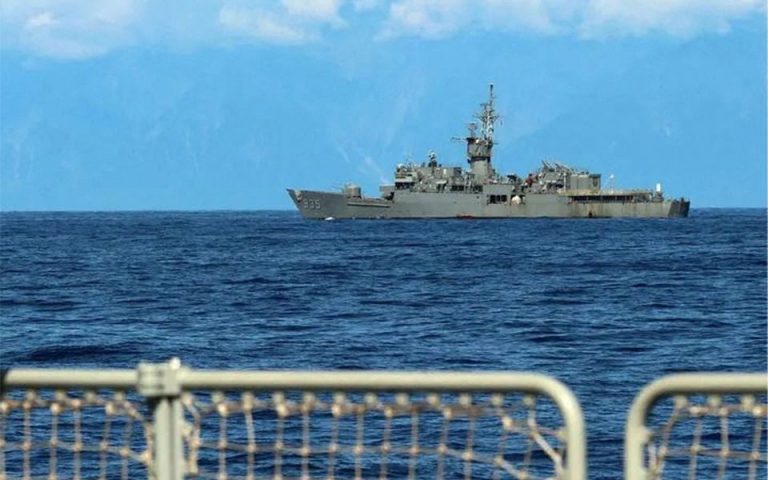 Taiwan’s defense ministry announced today that it has dispatched aircraft and ships to respond “appropriately” to Chinese military training centers around the island.

Chinese warships, aircraft and drones continued military drills this morning, with simulated attacks on Taiwan and Taiwanese warships, the island’s defense ministry said in a statement.

Speaking to reporters in Taipei, Su called on Beijing not to make a show of military might and condemned “foreign enemies” who he said are trying to demoralize Taiwanese through cyber attacks and disinformation campaigns.

Chinese and Taiwanese warships were playing “cat and mouse” today, hours before the scheduled end of four-day Chinese military exercises held in response to the visit of the speaker of the US House of Representatives to Taiwan.

Nancy Pelosi’s recent visit to the island angered China, which responded by test-firing ballistic missiles over the capital Taipei for the first time and cutting communication channels with the US.

Warships from China and Taiwan were sailing in close proximity to each other in the Taiwan Strait, with some Chinese vessels violating the median line that separates mainland China from the island, a person with knowledge of the matter said. As Chinese forces “pressured” the line, as they did on Saturday, the Taiwanese side remained close by to watch and, where possible, prevent the Chinese from crossing the median line.

“Both sides are showing restraint,” the person said, likening the ships’ maneuvers to a game of “cat and mouse.”

The Chinese drills, centered on six locations around the island, began on Thursday and are scheduled to last until noon today (local time). The Chinese military announced yesterday that it is conducting joint sea and air exercises north, southwest and east of Taiwan.

The US called the military high schools an escalation.

“These activities represent a significant escalation in China’s efforts to change the status quo. They are provocative, irresponsible and raise the risk of error,” a White House spokesman said. “They also go against our long-term goal of safeguarding peace and stability in the Taiwan Strait, which the world expects,” the spokesman said.