One of China’s largest and most pervasive surveillance networks got its start in a small county about seven hours north of Shanghai. 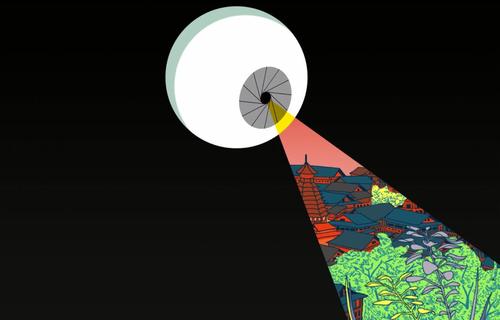 In 2013, the local government in Pingyi County began installing tens of thousands of security cameras across urban and rural areas — more than 28,500 in total by 2016. Even the smallest villages had at least six security cameras installed, according to state media.

Those cameras weren’t just monitored by police and automated facial recognition algorithms. Through special TV boxes installed in their homes, local residents could watch live security footage and press a button to summon police if they saw anything amiss. The security footage could also be viewed on smartphones.

In 2015 the Chinese government announced that a similar program would be rolled out across China, with a particular focus on remote and rural towns. It was called the “Xueliang Project,” or Sharp Eyes, a reference to a quote from communist China’s former revolutionary leader Mao Zedong who once wrote that “the people have sharp eyes” when looking out for neighbors not living up to communist values.

Sharp Eyes is one of a number of overlapping and intersecting technological surveillance projects built by the Chinese government over the last two decades. Projects like the Golden Shield Project, Safe Cities, SkyNet, Smart Cities, and now Sharp Eyes mean that there are more than 200 million public and private security cameras installed across China.

Every five years, the Chinese government releases a plan outlining what it looks to achieve in the next half-decade. China’s 2016 five-year plan set a goal for Sharp Eyes to achieve 100% coverage of China’s public spaces in 2020. Though publicly available reports don’t indicate whether the program has hit that goal — they suggest that the country has gotten very close.

China’s modern surveillance scheme started in 2003, according to Dahlia Peterson, research analyst at Georgetown University’s Center for Security and Emerging Technology, with the creation of the Golden Shield Project.

The Golden Shield Project, run by the Ministry of Public Security (MPS), is, in part, responsible for the country’s strict internet censorship. But the program also included physical surveillance. The MPS created databases that included 96% of China’s citizens, with one titled the National Basic Population Information Database. That database includes household registration information, called “hukou,” as well as information on past travels and criminal history, according to a report from the Immigration and Refugee Board of Canada.

Local population databases were also created, according to a paper published in the American Journal of Political Science. These local databases allowed for blacklists, which barred the use of public transportation. Police would be dispatched if someone who had been blacklisted tried to book a bus, train, or airline ticket.

Observers should take these figures with a grain of salt: Accurate and up-to-date information about China’s surveillance initiatives isn’t easily available, and what is publicly known is mainly generated by academics and journalists with some access to government officials or surveillance equipment manufacturers. It’s also unclear which cameras are exclusively viewed by village, city, and provincial governments, and which feed data back to the central government.

Just like Golden Shield, the SkyNet program still exists today, and benefits from 16 years of A.I. research, as well as the tech industry’s boom. According to the New York Times, SkyNet data is used at building complexes that use facial recognition to open security gates. The photos from those security gates are then shared with local police to build a database of the local population.

However, these surveillance schemes are mostly targeted at cities, where funding and population density makes centralized surveillance easier. Sharp Eyes, which is focused on rural areas, is meant to offload work from potentially understaffed police departments.

For instance, an article written by Chinese state media about the Sharp Eyes implementation in Pingyi notes that the county has a population of 1 million people, and only about 300 police officers.

What gets reported to police by the Sharp Eyes program isn’t just limited to crime. One Pingyi resident in the state media article spoke of reporting a collapsed manhole cover, while another mentioned that they had suspected a multilevel marketing scheme happening in a nearby building. The MLM organization was reported to the police, who allegedly broke it up with warnings and fines.

According to Peterson, the Sharp Eyes project is implemented differently depending on each city or town’s needs, but the general premise is the same: The city or town is divided into a grid, and each square of the grid acts as its own administrative unit. Citizens watch security footage from within their grid, giving a sense of ownership over their immediate surroundings. Municipal data can then be aggregated based on reports from each square on the grid.

Cities can also add new technology to the mix at their discretion. Though the system primarily relies on facial recognition and locally broadcast CCTV, the city of Harbin, for instance, published a notice that it was looking for predictive policing technology to sweep a person’s bank transaction data, location history, and social connections, as well as make a determination as to whether they were a terrorist or violent.

Much of the funding for these various surveillance schemes comes from the central government, but regional municipalities and cities also foot the bill for local networks of cameras. At times, counties’ surveillance spending far outstrips other municipal services. An analysis of more than 76,000 government procurement notices by ChinaFile showed that surveillance spending has become a significant portion of many cities’ budgets. In 2018, contracts from the city of Zhoukou showed that officials spent as much on surveillance as they did on education, and spent more than twice as much money on surveillance as on environmental protection programs.

In some instances, Chinese citizens even crowdfund these surveillance measures. In the Shandong province, residents of the small city of Linyi raised an additional 13 million yuan, or $2 million, to help support the full coverage of video surveillance cameras.

In a list translated by CSET’s Peterson, some of the top companies supplying this technology are surveillance camera manufacturers VisionVera and UniView, as well as big data company Neusoft. On its website, Neusoft specifically calls out that it manages a database on a population of 1.3 billion, and integrates data from more than 20 government sectors, as well as analyzes tens of millions of social videos.

Internationally known Chinese companies like Sensetime, Megvii, Hikvision, and Dahua are far more prevalent in conversations about the persecution of ethnic minorities. These companies have all been sanctioned by the U.S. government based on their involvement with the human rights abuses in Xinjiang, where the Chinese government has been accused of committing genocide against the country’s Uighur ethnic minority. Reports from Xinjiang’s internment camps are horrific, with documented cases of rape, sterilization, or forced labor.

The facial recognition system pitched to Xinjiang’s Shawan region to detect religious minorities was developed by Megvii, which denies involvement in the program. However, ChinaFile found contracts and state media reports that suggest large parts

A recent report from the LA Times and surveillance industry watchdog IPVM also showed that Dahua had also developed facial recognition to specifically detect Uighurs, a Chinese ethnic minority widely persecuted in China’s Xinjiang province. A separate report from IPVM showed how Huawei and Megvii cooperated in the development of a Uighur detection system in 2018.

China’s next five-year plan, which covers 2021 to 2025, places specific emphasis on giving social governance to local municipalities via the grid system, as well as building out even more security projects, to “strengthen construction of the prevention and control system for public security.”

This means the future of China’s surveillance apparatus likely looks a lot like Sharp Eyes: More power and social control given to local governments, so neighbors watch neighbors.

The government also emphasized the persecution of those it maintains as hostile and separatists.

“We will also closely guard against, and crack down on, the infiltration, sabotage, subversion and separatist activities of hostile forces,” the plan says.