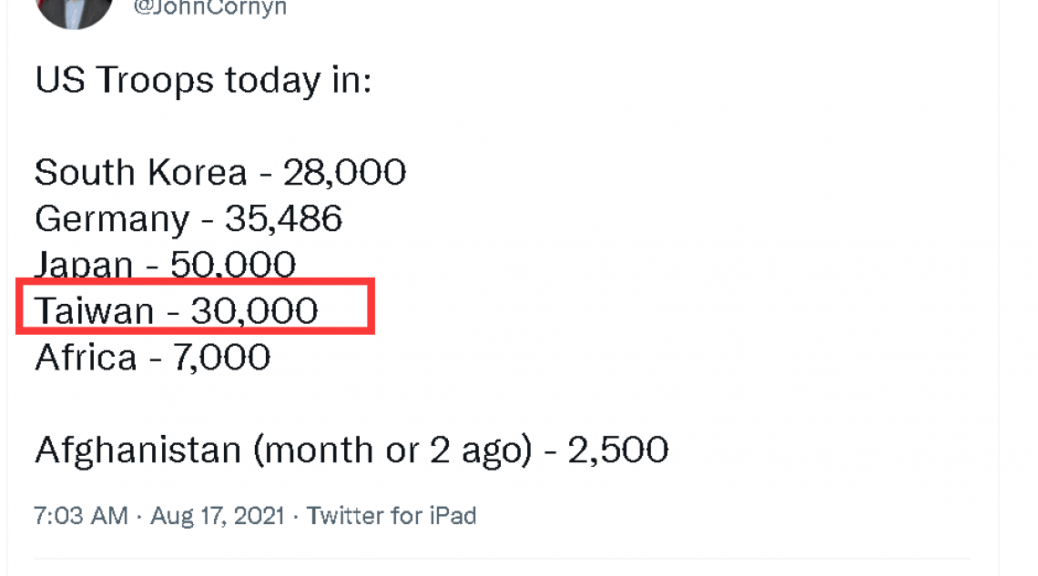 Hu Xijin, editor-in-chief of the Chinese state-run Global Times, said the US and Taiwan “must explain” figures posted by an American Senator which claimed 30,000 US troops are on the island. It comes as Beijing and Washington have suffered worsening relations over Taiwanese independence, as well as operations in the South China Sea.

Mr Cornyn’s post was uploaded in reference to the US pulling forces out of Afghanistan, with 2,500 “a month or two ago” in the country.

However, in his post, he said that 30,000 US troops are currently stationed in Taiwan.

Commenters believe Mr Cornyn is referencing the size of the United States Taiwan Defense Command, which boasted 30,000 troops from Combined Arms and branches but ceased operations in 1979.

China news: State media has threatened war after a Senator claimed US troops are in Taiwan (Image: PA)

The figures have sparked outrage in China, with Mr Hu warning that if Mr Cornyn’s post is accurate then Beijing will declare war with Taiwan.

He said: “Now, the US and the Taiwan authorities must explain.

“If it is true that the US has 30,000, or less than that number, soldiers stationed on the Taiwan island, Chinese military forces will immediately launch a war to eliminate and expel the US soldiers.”

He added later: “Someone said that John Cornyn mistook that number by using the number of previous US troops stationed on Taiwan island before China and the US set up diplomatic relations.

“I think the senator is not confused, and he wants to test our response. My answer to him is war.”

China news: John Cornyn is suggested to have used figures from 1979 (Image: TWITTER)

China news: Beijing has warned Taiwan of the US’ ‘fleeing action’ after Afghanistan (Image: PA)

Shen Shiwei, a CGTN journalist, echoed Mr Hu’s response, saying: “So the US army has a secret division in Taiwan?!”

The Chinese Kuomintang, a Taiwanese political party, also took issue with Mr Cornyn’s post, saying there are no US troops in the country.

Ron Hogan, the founder of Beatrice.com, also suggested Mr Cornyn would have realised there were no US troops in Taiwan “if you’d done more than skim the Wikipedia page”.

China news: The US has pulled all forces out of Afghanistan after 20 years of war (Image: EXPRESS)

It comes after China warned Taiwan the US “fleeing action” is a forecast in an apparent reference to the withdrawal of American troops from Afghanistan.

Li Haidong, a professor at the Institute of International Relations of the China Foreign Affairs University, warned the US could “cast aside” Taiwan should it fight for its sovereignty.

He told the Global Times: “The US’ fleeing action is a warning to the Taiwan secessionists, or rather, a forecast.”

Jin Canrong, associate dean of the School of International Studies at the Renmin University of China, echoed Mr Li’s remarks.

Hal Turner has reported on this HERE

OPINION / EDITORIAL
If there are US troops present on Taiwan island, China will crush them by force: Global Times editorial
By Global TimesPublished: Aug 17, 2021 04:40 PM 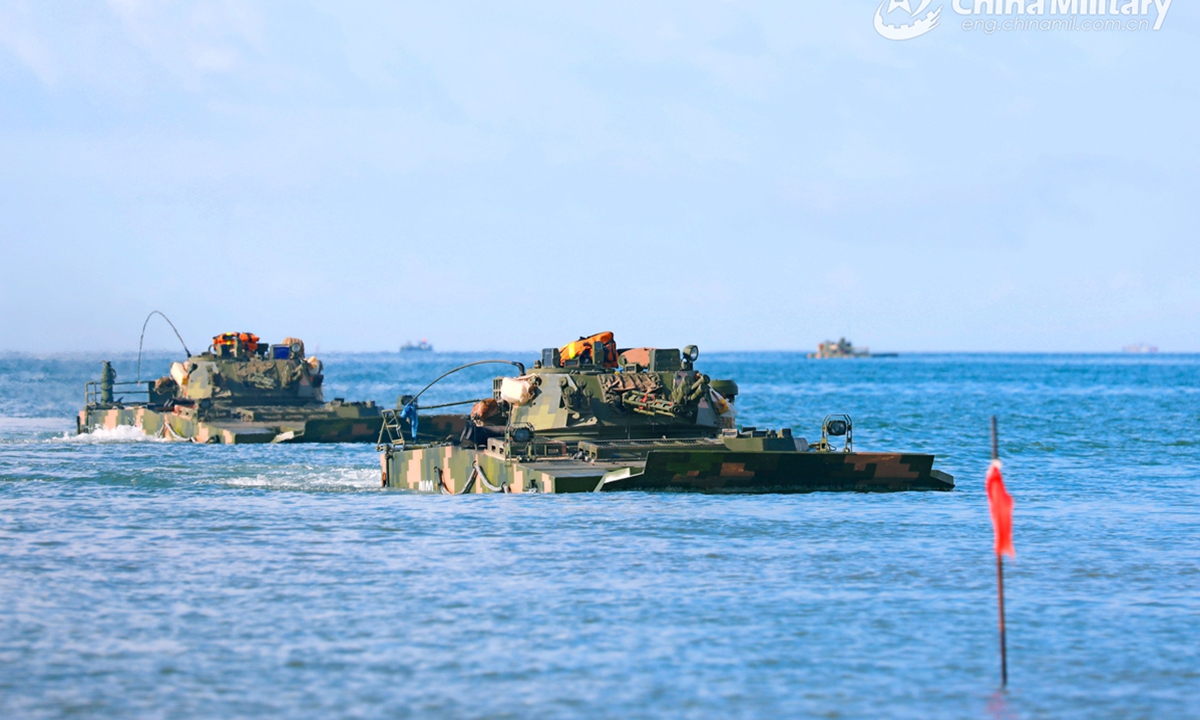 Amphibious armored infantry fighting vehicles (IFV) attached to a brigade under the PLA 72nd Group Army drive into the waters during an amphibious training exercise focused on subjects of basic driving, landing craft ferrying and assault wave formation, etc. on May 21, 2021.Photo:China Military

In a tweet on Tuesday, US Senator John Cornyn astonishingly said that the US has as many as 30,000 troops stationed on Taiwan island, more than the 28,000 US troops in South Korea. If that is true, the Chinese government and the Chinese people will never accept it. It is believed that China will immediately put the Anti-Secession Law into use, destroy and expel US troops in Taiwan by military means, and at the same time realize reunification by force.

The US stationing troops in the Taiwan island severely violates the agreements signed when China and the US established their diplomatic ties as well as all political documents between the two countries. It also critically runs counter to international law and even US domestic law. It is equivalent to a military invasion and occupation of the Taiwan Province of China. It is an act of declaring war on the People’s Republic of China.

We note that some people pointed out that Cornyn, a member of the US Senate Select Committee on Intelligence, must have mistaken the size of US military presence in the Taiwan island before the establishment of diplomatic relations between China and the US for today’s number. According to Wikipedia, the number of US troops stationed on the island of Taiwan gradually rose to 30,000 from 1968 to 1969. In an interview with the Global Times, a Chinese scholar doubted that Cornyn’s tweet was possibly a deliberate act to try to test the Chinese mainland’s reaction to US military presence in Taiwan. It will be also unacceptable for us if that is the case.

We sternly demand an immediate explanation from the US government on Cornyn’s tweet, as well as an immediate explanation from the Taiwan authorities. If there truly are 30,000 US troops in Taiwan, or even fewer than that, it would be an extremely serious situation that crosses China’s red-line. Those US troops must withdraw from the island immediately and unconditionally, and both the US government and the Taiwan authorities should publicly apologize for this. Otherwise, we believe that an all-out war across the Taiwan Straits will break out quickly, and the Chinese People’s Liberation Army will wipe out the US forces, liberate the island of Taiwan, and settle the Taiwan question once and for all.

We would like to stress that the presence of US troops in Taiwan is a red-line that cannot be crossed. We believe that the Chinese government and military forces will firmly work with the whole Chinese people to safeguard China’s territorial sovereignty and resolutely eliminate and expel any foreign forces that violate China’s territory.

FEARS of World War Three have been reignited after China warned Taiwan it should be “trembling” as the US “won’t protect” the island from invasion.

With chaotic scenes erupting across Afghanistan amid a Taliban takeover after President Joe Biden decided to withdraw US troops after 20 years, Beijing has warned Taiwan “can’t rely” on America in a crisis.

Senior Colonel Shi Yi of the People’s Liberation Army Eastern Theater Command said “Recently, the US and Taiwan authorities have been frequently colluding and making provocations, sending wrong signals that severely violates China’s sovereignty and seriously damage peace and stability in the Taiwan Straits. They have become the biggest source of security risk in the region.”

The exercises are a necessary action taken based on the current security situation in the Taiwan Straits and the need to safeguard national sovereignty, and are a solemn response to the foreign interferences and the provocations by “Taiwan independence” forces, Col. Shi Yi continued.

He went on to say the PLA Eastern Theater Command will continue to boost its war preparedness and related training, and is determined and capable of crushing any “Taiwan independence” secessionist activities and resolutely safeguard national sovereignty and territorial integrity.

Li Haidong, a professor at the Institute of International Relations of the China Foreign Affairs University, said he believes the US is set to “cast aside” Taiwan should Taipei push for independence.

“The US’ fleeing action is a warning to the Taiwan secessionists, or rather, a forecast,” he told the Global Times.

Meanwhile, Jin Canrong – associate dean of the School of International Studies at the Renmin University of China – accused the US of holding “empty promises”.

He told the outlet: “Those who have a clear mind should understand that Taiwan residents can’t rely on the US.

“However, given the ideology-driven influence, some observers may see the situation in the island as being different from that in Afghanistan, but there’s one thing in common – America’s empty promise.”

China regards Taiwan as part of its territory and has long threatened to use force to bring it under its control.

Relations between the pair have been strained after the Taiwanese President Tsai Ing-wen hit back at the “One China” policy pursued by Beijing, which does not recognize Taiwanese independence.

Under the policy, Taiwan is viewed as a breakaway province of the country rather than a separate country with its own government.

The One China policy is a key cornerstone of Sino-US diplomatic relations and was recognized by former president Donald Trump.

Washington, however, has always maintained a “robust unofficial” relationship with Taiwan and has continued to sell arms to the island.

Yesterday’s collapse of United States operations inside Afghanistan seems to have spawned China’s military deployment today.  After seeing the US completely botch the removal of troops from Afghanistan, missing a May 1 Deadline agreed to by former President Trump, and then watching helplessly as the Taliban took over vast swaths of the country, and force-out the Afghan President, the United States looks weak to the rest of the world.

Our competitors and adversaries see this weakness and are moving to exploit it.

This is what Americans caused when they failed to confront the election fraud that allowed Joe Biden to steal the US Presidency in November 2020.  The world sees and knows that Biden is an illegitimate President, and now also sees the heretofore vaunted American people are little more than docile sheep, that won’t even stand up and fight when their right to vote is erased by brazen, visible, fraud.

Things are likely to get much, much, worse for the United States as this charade of a Constitutional Republic is laid bare by an inept and illegitimate President, and a people who turned out to be political weaklings.

The Founding Fathers would have stormed the Capital and the White House with torches and pitchforks, taken the usurpers out and hung them.  Today’s Americans . . . change the channel on the TV and withdraw into fantasy while their freedom is stolen.

The United States has shown weakness in the disastrous action in Afghanistan, and for people with the communist mindset, when you show weakness you attract their violence.