Chinese property giant Evergrande defaults on $300billion debt: Beijing prepares ‘controlled demolition’ of the firm to protect its economy amid fears it could have global consequences

Debt-crippled Chinese property giant Evergrande has defaulted on its loans, with Bejing preparing a ‘controlled demolition’ of the firm to protect its economy.

Evergrande has been struggling to meet its loan commitments since the Chinese government launched a crackdown earlier this year to curb rampant borrowing and consumer speculation in the property sector.

After months on the brink, the company defaulted for the first time on $1.2billion worth of bond debt on Thursday. The company’s total debts run to $300billion.

Top Tory tells Boris Johnson he must RESIGN if he misled the Parliament over No10 party – as backbench rebellion grows over PM’s handling of the fiasco and new Plan B rules that bring back WFH, more masks and Covid passports , and other top stories from December 09, 2021.

On Thursday, Fitch Ratings agency confirmed the company had defaulted as it downgraded the firm’s status to a restricted default rating.

Fitch also declared Kaisa, a smaller property company but one of China’s most indebted, had defaulted on $400 million of bonds.

A slowdown in the Chinese real estate sector, which accounts for a significant proportion of the country’s economic output, could have ripple effects on global growth. 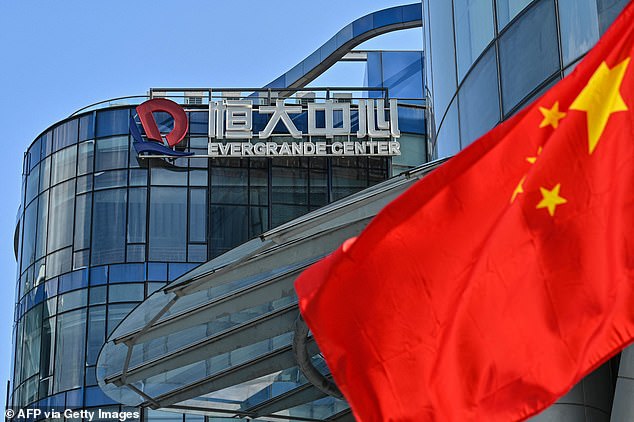 There have been concerns that the collapse of the real estate giant could cause another ‘Lehman moment’, referring to the collapse of Wall Street’s Lehman Brothers, which is still the largest bankruptcy filing in US history.

The bankruptcy of the financial services firm came at the climax of a mortgage crisis in September 2008, and its sudden overnight collapse prompted global panic.

Analysts have suggested that Beijing will oversee a ‘controlled demolition’ of Evergrande in a bid to prevent another global crisis, similar to that seen in 2008, and protect its own economy.

Evergrande default: What it means for Chinese and global markets

What happened to Evergrande?

The Chinese government sparked a crisis last year when it launched a drive to curb excessive debt among real estate firms as well as rampant consumer speculation.

Evergrande – a real estate giant with a presence in over 280 Chinese cities – was the most prominent developer to pay the price for the clampdown.

More than $300billion in debt, it teetered for months on the edge of default, but returned each time thanks to a last-minute repayment.

On Thursday, Fitch confirmed the company had defaulted on more than $1.2billion worth of bond debt, as it downgraded the firm’s status to a restricted default rating.

A slowdown in the Chinese real estate sector, which accounts for a significant proportion of the country’s economic output, could have ripple effects on global growth.

Evergrande’s woes have rocked stock markets – and the real estate sector makes up much of distressed dollar-denominated debt internationally.

But a default had long been expected, and fears over a ‘Lehman moment’ – a reference to the Wall Street titan whose collapse prompted panic worldwide during the 2008 global financial crisis – have failed to play out.

Chinese authorities have appeared unlikely to allow the kind of overnight collapse seen in 2008, with analysts suggesting that Beijing will oversee a ‘controlled demolition’ of the firm.

‘Is the financial system here, or elsewhere, as vulnerable as it turned out to be in the wake of Lehman? The answer to that is no,’ the head of Hong Kong’s Securities and Futures Commission Ashley Alder told Bloomberg TV.

The firm’s admission prompted the local government in Guangdong – where it is headquartered – to summon billionaire chairman Xu Jiayin, and to announce they would send a ‘working group’ to the company.

‘I’d think the market has already priced in the default in Evergrande’s and many others’ prices,’ Chuanyi Zhou, credit analyst at Lucror Analytics, said.

And Thursday’s default is likely to speed up that process, they said.

With the default of Kaisa, China’s 27th-largest real estate firm for sales, it may be too late to avoid a ripple effect.

What does it mean for investors?

Having already blamed the firm’s woes on ‘poor management and blind expansion’, the head of China’s central bank has now hinted that it would be dealt with in a ‘market-oriented’ way.

Despite the state’s reluctance to bail Evergrande out, its moves since have eased investor concern of a collapse.

‘The priority would surely be to ensure that homes are delivered, and what remains afterwards will be repaid according to the priority level of bonds,’ said Meng Ting, a senior credit strategist at ANZ Bank.

What about Chinese developers?

Around 11 property firms defaulted on bonds since concerns started to grow over Evergrande in June.

Kaisa – which suspended share trading in Hong Kong on Wednesday – was among the latest. It is estimated to have $11.6b dollar notes outstanding.

Property firms made up 36 per cent of the $10.2billion of offshore bonds that Chinese borrowers defaulted on this year, Bloomberg said.

How will China’s economy be impacted?

HNA’s restructuring did not cause investor panic – although Evergrande’s higher profile means this time will likely prove a bigger challenge.

Beijing’s broader clampdown has already had a major impact on the property sector and deepened worries over key firms’ financial health, bringing home sales and prices down

‘The defaults of Evergrande and Kaisa move us to the second step of this China Property downturn, with systemic risk being gradually replaced by idiosyncratic risk,’ said Robin Usson, credit analyst at Federated Hermes.

‘It will be interesting to see the role played by SOEs (state-owned enterprises) in the restructuring process, the level of ‘control’ exerted by the government over this ‘marketed-oriented approach’,’ Usson added.

Ashley Alder, the head of Hong Kong’s Securities and Futures Commission Ashley Alder, insisted that the financial system in China, is not as vulnerable as it was in the 2008 financial crisis.

More than 10 Chinese real estate firms have defaulted in the second half of this year.

But Ashley Alder, head of Hong Kong’s Securities and Futures Commission, played down concerns that China’s property sector woes could snowball into a something resembling the 2008 global crash.

‘It’s a significant event, you can’t possibly underplay it, but it’s basically not that category of event for the financial system,’ he told Bloomberg Television.

China’s property sector is one of the main drivers of the nation’s economy and keys to the wealth of the booming middle class.

Intent on maintaining ‘social stability’, Beijing has been working to avoid a massive fallout from the collapse of Evergrande.

But it has eschewed a government bailout.

Instead, a ‘risk management committee’ stacked with officials from state entities was last week sent in to clean up the current mess.

‘The rights and interests of creditors and shareholders will be fully respected in accordance to their legal seniority,’ Chinese state media quoted Yi as saying in a pre-recorded video message to a top-level seminar in Hong Kong.

According to a transcript released by the central bank, Yi added: ‘The short-term risks of individual real estate companies will not affect the normal financing function of the medium- and long-term market.

‘Evergrande’s hazard is a market event that will be properly handled in accordance with market principles and law.’

But even with those assurances, investors remain in the dark about what the future holds and what Beijing’s overall plan is.

Neither Evergrande, nor Kaisa, have yet to make any comments on the default reports and what they plan to do next.

‘In the next step, I think all the creditors will sue Evergrande,’ Chen Long, a partner at research firm Plenum told AFP, adding Fitch’s announcement formalised what investors already knew about the defaults.

Evergrande will have ‘to enter a period of restructuring,’ he said, adding that while creditors will hope to secure assets on the mainland ‘I don’t think it will be very successful’.

Evergrande’s troubles first surfaced this year when it detailed how heavily leveraged the firm had become.

The eye-watering figures shook China’s credit markets because of the sheer size of the company and the potential fallout should it collapse.

Last month it missed its first foreign bond repayment but there was a 30-day grace period attached. That ran out on Tuesday with some bond owners complaining they had yet to be repaid.

Questions had swirled over whether Evergrande is simply too big to be allowed to fail, given its collapse could send shock waves through the wider Chinese economy.

But it become increasingly clear in recent days that Beijing was willing to close the chapter on the 25-year-old real estate empire that has typified China’s breakneck growth in recent decades.

After Evergrande said Friday it may not be able to meet its financial obligations, the government summoned the company’s founder, Xu Jiayin, and the new risk management committee was announced.

Financial media in Hong Kong have reported that Xu, a billionaire who is also known as Hui Ka Yan in Cantonese, has been selling some of his own luxury assets to raise funds.

According to Bloomberg News, before Thursday, at least 10 lower-rated real estate firms have now defaulted on onshore or offshore bonds since the summer.

Before Thursday, Chinese borrowers had defaulted on a record $10.2 billion of offshore bonds, Bloomberg had reported, with real estate firms accounting for 36 percent of those non-repayments.

Total Chinese corporate, government and household debt has risen to about 300 per cent of annual economic output from 270 per cent in 2018, unusually high for a middle-income country.