The ministry said it counted 2,439 defenders had emerged and surrendered over the past few days. The final holdout group that was last to come out was tallied at 531. The Russian military’s now total control over the sprawling plant and city of Mariupol is considered the be its greatest victory over three months of war.

The Ukrainian side has presented it as an end to the “combat mission” while Moscow emphasized the Azov militants, who are neo-Nazi in ideology, were defeated and surrendered. Prokopenko those under him to preserve “life and health … and stop defending the city.”

Crucially, there are Russian and other international press reports saying that the head of Azov is now in Russian military custody: “The Russian Defense Ministry also confirmed the surrender of Denis Prokopenko, the commander of the so-called Azov battalion – a far-right military unit of neo-Nazi volunteers operating in Ukraine as a reserve force of the country’s Armed Forces,” according to the reports.

Though there’s been little in the way of confirmation, Russia’s Channel One correspondent Irina Kuksenkova said that Azov leaders Denys Prokopenko, Sviatoslav Palamar and Serhiy “Volyna” (Ukrainian Marine commander) have now all surrendered.

The Guardian wrote the following of at least one of these high-level commanders:

Pro-Kremlin telegram channels also released a video with Sergei Volynsky, the commander of the 36th Marine Brigade unit, in which he said that his unit has surrendered. The unit was one of the main forces defending the steelworks.

A number of Ukraine war observers have noted that there’s yet to be visual proof or confirmation, including video, of Prokopenko’s arrest by Russian forces. Additionally there’s speculation he may still be in the plant, or seeking to escape past Russian lines.

Whatever your views on Ukraine, the war and the US role: it’s just amazing that the Western press — which spent a full decade in unison calling the Azov Battalion neo-Nazi fanatics — now speak of them in admiring terms and will only say that their Nazism is a “Russian claim.” https://t.co/izx0ssgdyg

Meanwhile, Western mainstream media has remained silent on the fate of the Azov leaders – likely also as few or none of its correspondents are on the ground at Azovstal, and Kiev has yet to confirm whether or not Prokopenko and others are now in Russian detention.

Is the truth starting to sink in? 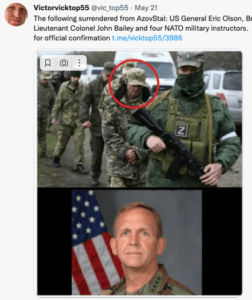 As it became known to Kommersant, thanks to the testimony of the military who surrendered at the Azovstal plant in Mariupol, the Investigative Committee of the Russian Federation established that the previously detained mercenary from Britain, Sean Pinner, was a sniper.

The marine himself claimed that he was preparing the Ukrainian military, as well as food for himself and his colleagues. https://t.me/kommersant/32238

Throughout the assault on the Azovstal factory, DPR servicemen constantly wiretapped the enemy’s negotiations.

The military recorded the movements of neo-Nazi fighters and knew about the real situation in their hideouts.

This was a military secret until recently. Now they’ve made it public.

Breaking News: Lithuania To Be Cut Off From Russian Oil, Gas, and electricity, Sunday!

The country of Lithuania will be cut-off from all Russian oil, natural gas flows, and electricity, starting Sunday morning.

The Canadian Forces says it had no obligation to be entirely certain of the backgrounds of those soldiers it trained in Ukraine.

One thought on “Complete surrender of Azov nazis at Azovstal”