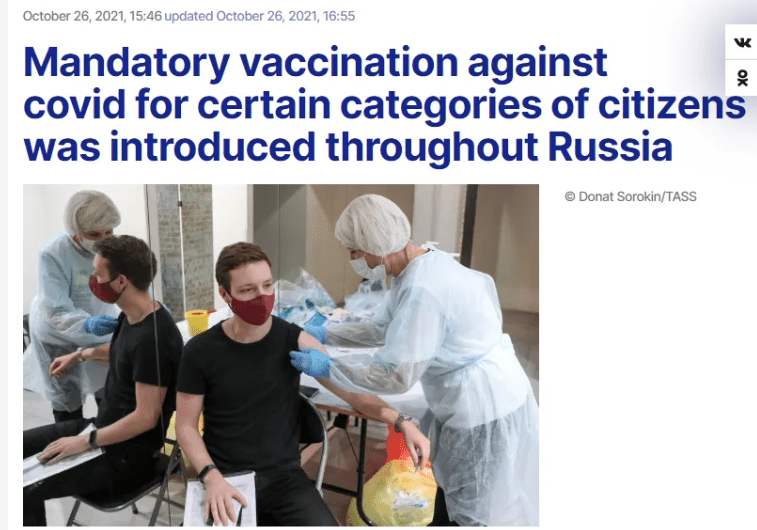 The usual suspects are frothing at the mouth after your humble correspondent politely pointed out that Russia’s Ministry of Defense forcibly injects all military personnel with unproven genetic goo, and that there is now clear proof that mobilized Russians are being subjected to this same unfortunate affront to basic human dignity.

Thomas Röper, the famous pundit who claims Sputnik V is safe and effective, and insists Russia’s digital ruble is different from other soul-raping CBDCs, has expertly exposed the Russian military’s coercive vaxxing (objective reality) as a giant H-O-A-X! Good heavens!

A reader recently alerted me to an intriguing article published by Thomas Röper, the curator of Anti-Spiegel. In it, Röper argues that Ernst Wolff—an authoritative voice on Great Reset shenanigans—is wrong to list Russia as an active participant in the COVID-triggered New Normal…

Röper begins by claiming there has been no meaningful compulsory vaccination in Russia, and that coercive vaccination policies were never “implemented in practice”:

In Russia – as in almost every country – there is a legal basis as to whether and under what circumstances which vaccinations are mandatory. Vaccinations against Covid-19 are not included, but there are exceptions. For example, there is – at least to the best of my knowledge – compulsory vaccination for doctors working in hospitals so that they do not (or are less likely) to pass the disease on to patients who are already weak.

Last summer there were reports in Russia that employers were being obliged to ensure that 60 percent of their workforce were vaccinated, which also made waves in the German media. At the time, I immediately wrote that this could hardly be implemented in practice, because how should employers decide who is to be vaccinated and who is not, in order to reach 60 percent? The government instruction was probably just intended to put pressure on people to increase the vaccination rate, which has had limited success. The vaccination rate against Covid-19 is still low in Russia, but the pressure at the time made at least some people decide to get vaccinated.

After Moscow introduced Russia’s first compulsory vaccination decree in June 2021, Anna Popova, head of the Federal Service for Surveillance on Consumer Rights Protection and Human Wellbeing (Rospotrebnadzor), announced that “mandatory immunization of risk groups” was a new “tool” that could be used to increase the country’s vaccination rate. And she wasn’t lying.

In June 2021, TASS provided a list of “risk groups” that were subjected to compulsory vaccination in Moscow:

Labor Minister Anton Kotyakov said on June 19, 2021 that people in these sectors who refused to get vaccinated could be indefinitely suspended from work.

Was this policy “implemented in practice”? Of course it was. Over a two month period, the number of vaccinated residents in Moscow more than doubled.

There was nothing voluntary about this surge in vaccinations—Muscovites who refused to get vaccinated risked losing their jobs.

By the end of October 2021, every region in Russia had adopted some form of compulsory vaccination.

Pick any region in Russia and with a simple Yandex search you can find stories about Russians being coerced into getting vaccinated.

Here’s an article from October 2021 about mandatory vaccination in Tyumen:

In the Tyumen region, mandatory vaccination against coronavirus has been introduced for state, municipal employees and those who work in the service sector. […]

Evgeny, a physical education teacher at a school in Tyumen, [told his story]:

We were told until March [2021] that vaccination would be voluntary. Three weeks later, they announced that everything would be mandatory for teachers … Many teachers say that this is a disgrace. They believe that the vaccine is not tested. We really do not know what will happen to us in 3-4 years … The teachers had no choice: either get vaccinated or quit … There were a couple of teachers who refused, tried to argue with the management … In any case, they were all shown to the door.

Or how about the story of Valentina Yazenok, the 18-year-old student from Kamchatka who was told that she needed to get vaccinated in order to attend university? Valentina died less than three weeks after receiving her second dose. Her mother told local media:

Valentina tolerated the first component of Sputnik normally. Although she had migraines for several days. The second component was introduced to her on December 12. Almost immediately, her head began to hurt — her left temple. It got worse every day, so much so that she complained to me. I was against her getting vaccinated. But, according to Valentina, the university notified students that they would be suspended from classes and not admitted to exams if they were not vaccinated.

Röper claims that policies requiring businesses to vaccinate 60% of their workforce “could hardly be implemented in practice, because how should employers decide who is to be vaccinated and who is not, in order to reach 60 percent?”

This is baseless speculation—actually, it’s pure fiction. These decrees were enforced and expanded.

Moscow’s original compulsory vaccination decree from June 2021 required employers to vaccinate 60% of their workers. But in October of the same year, this requirement was raised to 80%.

Many other regions did the same: After reaching the initial vaccination target, they increased the percentage of workers that were required to get jabbed.

St. Petersburg initially ordered employers to vaccinate 65% of their workers. In October 2021, the decree was changed to 80%.

“From November 15, [2021], all state, municipal and private organizations must ensure that 100% of employees have documents confirming that they have completed a full course of vaccinations, received a medical exemption, or have been diagnosed with COVID-19 in the last six months. Employees without them will have to provide a negative PCR test every 72 hours to be allowed to work” a decree signed by governor Alexander Drozdenko stated.

It’s truly mind-boggling that Röper is pretending that none of this has happened. Fascinating, really.

Röper continues his dazzling mental gymnastics by claiming that the forced vaccination of military personnel in Russia is a “hoax.” In his own words:

Since I have a direct line to the press office of the Russian Ministry of Defense due to my press tours in the Donbass, I asked there about the German media reports without further ado. The answer was clear:

“These are Russian citizens and vaccinations are voluntary in our country.”

To start: No, vaccination is not voluntary in Russia—as we just established—and anyone who claims to work in the Ministry of Defense should know this.

The Ministry of Defense adopted a decree in June 2021 making vaccination compulsory for all military personnel—including conscripts.

“I would like to emphasize that the army has implemented all the necessary measures to combat the coronavirus infection in the army itself, carried out almost 100% vaccination of personnel, this made it possible to avoid the mass spread of the disease, protect the life and health of military personnel and thereby guarantee high combat readiness of units and formations,” Russia’s president said during a meeting with Defense Minister Sergey Shoigu on December 21, 2021.

The Russian government’s official information portal, Explain.rf, has a page about compulsory vaccination for mobilized citizens:

Explain.ru cites the same June 18 decree that the Ministry of Defense used to vaccinate all military personnel:

Medical care for military personnel is a priority for the state. In accordance with the Decree of the Chief Sanitary Doctor of the Russian Ministry of Defense dated June 18, 2021 No. 129, mandatory immunization applies to all categories of military personnel, including those called up for mobilization.

Vaccination is essential to prevent the occurrence of any epidemics. Therefore, it is mandatory for conscripts and military personnel and is carried out according to the vaccination calendar and according to epidemiological indications.

There is nothing up for debate here: COVID vaccination is mandatory for all military personnel. The only question is how many mobilized Russians will be subjected to this insane policy.

Three regions have already publicly announced that they will vaccinate mobilized citizens. The main word here is “publicly.”

If all of this is just fake news—if regions are carrying out these policies against the wishes of the federal government—where is the statement from the Ministry of Defense?

There is none, because the federal government is also saying that mobilized citizens will be vaccinated.

Russian news outlet News.ru called a government hotline that answers questions about mobilization, and asked if unvaccinated citizens would be exempt from military service.

A citizen’s lack of vaccination against COVID-19 is not a basis for exemption from partial mobilization or a deferment, NEWS.ru was told on the 122 hotline. Those not vaccinated against coronavirus will be vaccinated in military units.

It is noted that in accordance with the decree of the chief sanitary doctor of the Ministry of Defense dated June 18, 2021 No. 129, mandatory immunization applies to all categories of military personnel. These include those called up as part of partial mobilization.

The call center added that vaccination is necessary to prevent epidemics. Therefore, it is mandatory for mobilized people to be vaccinated against coronavirus. If it is not available, vaccination will be carried out in a military unit.

Again, this is information from a federally operated call center.

If Röper is so confident that compulsory vaccination in the Russian military is a “hoax,” why did Putin say in December 2021 that almost 100% of military personnel had been injected, and why is the Russian government’s own information portal, and call center, stating that COVID vaccination is mandatory for mobilized citizens?

If there’s no compulsory vaccination in the Russian military, why are Russian doctors writing letters to Putin asking him to rescind this policy? Is this also a “hoax”?

One thought on “Compulsory vaccination: an important corrective to attitudes about Russia”