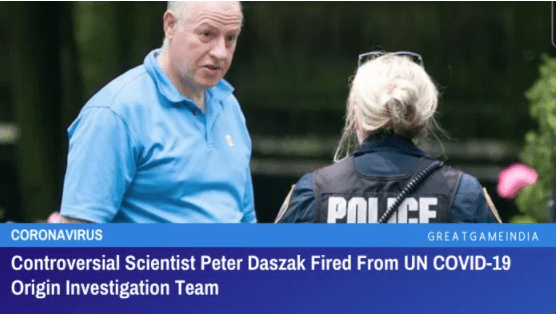 Controversial British scientist Peter Daszak has been removed from the COVID-19 commission looking at the origins of the pandemic after helping secretly denounce the lab leak theory while failing to mention his close ties to the same facility.

The scandal-hit scientist’s departure from the UN-backed Lancet commission into the virus’s origins was revealed on its website.

It added a sentence in brackets under his photo and above his biography, saying ‘recused from Commission work on the origins of the pandemic’ reported DailyMail.

No further information on Daszak’s departure was given – but he has faced conflict of interest claims after his close ties to the Wuhan Institute of Virology were revealed worldwide last month.

However, as our readers would remember GreatGameIndia exposed Peter Dazak last year itself.

We revealed how American tax-dollars were used to fund controversial gain-of-function research, which is the ability of a virus to jump from animals to humans. The project backed-up by Dr. Anthony Fauci diverted US funds to engineer Coronavirus at Wuhan lab via a company now under federal investigation.

That company is EcoHealth Alliance lead by Peter Daszak.

Daszak, 55, president of the New York-based EcoHealth Alliance, was one of 28 experts from around the world asked to analyze how best to respond to the pandemic.

Daszak’s presence on a number of bodies investigating the origins of COVID has proved controversial because he has links to the Wuhan Institute and its chief researcher Dr Shi Zhengli – dubbed ‘Batwoman’.

He helped organize a letter published in prestigious medical journal The Lancet that was signed by 27 scientists, including Daszak himself, and denounced the lab leak claim as a ‘conspiracy theory,’ and ‘nonscientific.’

Daszak has since faced conflict of interest claims over his ties to the lab investigators increasingly believe COVID may have leaked from.

They wrote at the time: ‘We stand together to strongly condemn conspiracy theories suggesting that COVID-19 does not have a natural origin.

‘Conspiracy theories do nothing but create fear, rumors, and prejudice that jeopardize our global collaboration in the fight against this virus.’

The ‘bullying’ letter, orchestrated by Daszak was criticized by experts for ostracizing anyone offering different opinions on the virus’ origins, dismissing them as conspiracy theorists.

It is only now, nearly 16 months after that letter was published in the world-renowned medical journal, that the theory COVID was accidentally leaked from a lab or man-made in Wuhan is being looked at seriously.

Professor Palese, 77, made a significant U-turn, admitting all theories on how COVID came about now need proper investigating.

He told MailOnline: ‘I believe a thorough investigation about the origin of the Covid-19 virus is needed.

‘A lot of disturbing information has surfaced since the Lancet letter I signed, so I want to see answers covering all questions.’

Asked how he was originally approached to sign the letter and what new information had come to light specifically, Professor Palese declined to comment.

Professor Palese spoke out as America’s leading pandemic expert Anthony Fauci continued to face fevered calls to resign after emails revealed that leading virus experts warned COVID could be man-made – even as he downplayed the possibility.

American lawmakers have introduced the Fire Fauci Act with the intention to fire Dr Anthony Fauci for misinformation with regards to COVID-19 and for covering-up the origin of the virus.

The Fire Fauci Act will bring Fauci’s salary to $0 and require Senate confirmation to fill his position.

Another scientist who signed the letter, Dr Jeremy Farrar – director of the Wellcome Trust in London – declined to comment on the Fauci allegations but said it remains ‘most likely’ the virus came from an animal but ‘there are other possibilities which cannot be completely ruled out and retaining an open mind is critical’.

Emails also revealed how all of these scientists colluded with Dr Fauci in a cover-up of the COVID-19 bioweapons research also known as Gain-of-function experiments to peddle natural origin theory of the coronavirus.

Last year group of Indian scientists discovered that coronavirus was engineered with AIDS like insertions. After GreatGameIndia published the results of the study, it attracted heavy criticism to an extent that the authors were forced to retract their paper.

Now, Fauci Emails reveal that it was Dr Anthony Fauci himself who threatened the Indian scientists and forced them to withdraw their study linking COVID-19 to AIDS virus