Taiwan has had one of the most effective policies to fight

The World Health Organization’s assistant director-general Bruce Aylward ended a video call with an RTHK journalist after she asked him about Taiwan’s status.

Bruce Aylward @WHO did an interview with HK’s @rthk_news When asked about #Taiwan he pretended not to hear the question. The journalist asked again & he even hung up! Woo can’t believe how corrupted @WHO is.

At first, the epidemiologist appeared to pretend not to hear producer Yvonne Tong’s question about whether the UN body would reconsider Taiwan’s membership. “I’m sorry, I couldn’t hear your question, Yvonne… let’s move to another one then,” he said.

When Tong called him back to ask again about Taiwan and its coronavirus measures, Aylward said: “Well, we’ve already talked about China.”

He then ended the interview, which was part of RTHK’s weekly news show The Pulse. Taiwan has been ruled by the Republic of China government since 1945, but Beijing insists the island is part of its territory and pressures other countries and international bodies to follow its “One China” policy. Taiwan is excluded from the WHO, though participated in the World Health Assembly – the body’s annual policy meeting- between 2009 to 2016.

More than 618,000 people globally have been infected with Covid-19 and over 28,000 have died from it. Taiwan, however, has been praised for its efforts to combat the outbreak.

Aylward has regularly featured in Chinese state media after he led a WHO mission to the country during the outbreak.

In an interview with Channel 4 on Mar 4, Dr Bruce Aylward of the @WHO praised #China‘s #coronavirus prevention work, saying potential patients were well-organized and tested quickly. Potential patients receive excellent care during their 14-day quarantines. 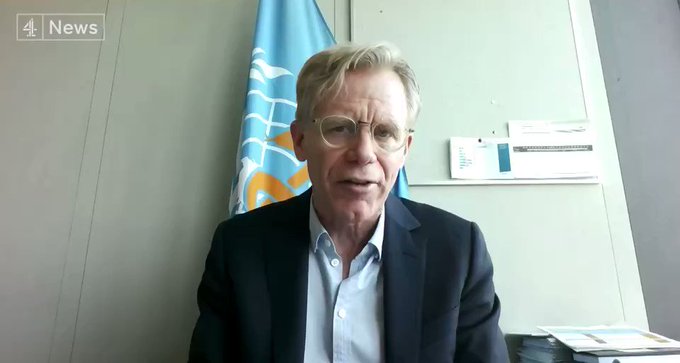 He has repeatedly praised the country’s leadership and, at one press conference, stated that – if he was infected with the disease – he would want to be treated in China.