I am, I am afraid of a more pessimistic (read, realistic) mindset than this and will be delighted if this court case goes the way it should.
The judge, I suspect, will listen and then do what the government expects him to. 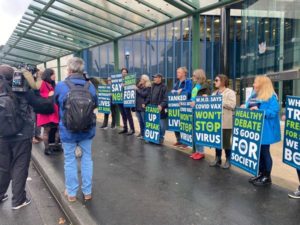 The reports are in that Sue has done an incredible job this morning to represent the interests of New Zealanders standing up to unlawful government behaviour!

Word is that the judge has been listening.

She was unaware of the VAERS system and is asking some good questions.
She is entertaining the idea that the rollout has been unlawful.
Crown law have been arguing that the “limited” wording was used due to the initial rollout to the border workers. It appears that this is their way of justifying the use of the specific section of the Medicines Act.
Sue has argued back that if this was the case, and the border workers theoretically work in a scenario with higher risk, then how can this be lawfully extended to the broader public?

We have just caught snippets during the lunch break and will bring you another update with more information later in the day!