Coronavirus: Jacinda Ardern says vaccination passports could be part of a toolbox of restrictions should country hit 90 per cent vaccination rate 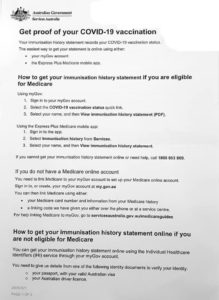 This is in Australia

Prime Minister Jacinda Ardern says vaccination passports could become part of a toolbox of restrictions should enough of the population get the COVID-19 vaccination.

In an interview with the Weekend Herald, Ardern said the Government would release details of levels of restriction should the country hit a 90 percent vaccination rate and it would likely include vaccination passports.

The passports, which prove whether a person has been immunised against coronavirus, could be required when going to certain venues.

Overseas, similar documents are used when accessing a range of public venues.

“Having panned around now, I can see how they can fit into a toolbox. The other thing we’re seeing is some countries have used them initially for a period of time. It has helped increase vaccination rates and then they have not had to continue using them,” Ardern told the Weekend Herald.

“So I do think options like that we should consider whether or not it is an extra way we can still get to go out and enjoy events and things in a way that doesn’t come at a great cost to everyone.”

Appearing on Newshub Nation on Saturday, she told Tova O’Brien businesses should have the right to choose who they let in.

“If you’re the organiser of a big event, you might want to have that as part of the health and safety measures you take – that’s up to those people to make those decisions.

“But when you are looking at people who are going to work, it always has to be a balance… we’ve got to be very careful we don’t end up with two classes of citizens.”

Collins also called for more education aimed at people who were hesitant to get the vaccine.

“There are some people who have been influenced by conspiracy theorists and all these sorts of things, we need to use our opportunity to educate people on this, and particularly use our general practitioners to help them,” she told Newshub Nation.

Deputy Prime Minister Grant Robertson said a conversation about whether a COVID-19 vaccine passport could be used domestically at public places like venues and businesses is underway.

Speaking at Friday’s 1pm press conference, Robertson said there was a need to have a conversation about what happens in terms of venues or businesses.

“That conversation is underway. I’m not going to speculate today on where it’s going to end up at.”

Australia plans to have a vaccine passport ready in the next few weeks, to support the return of international travel.

And with New Zealand sticking to its plan to start opening up in 2022, a digital form of vaccine proof is also in the pipeline here.

There could soon be a new QR code in town – a vaccine passport of sorts – similar to the one used in the UK at bars and clubs.

Covid-19 Response Minister Chris Hipkins says a first-stage proof of vaccination will be ready in weeks.

“The first stage is a manual process where you’ll be able to download a certificate, and that certificate would be able to be verified. So for example, it might have a QR code on it, that would allow the person that you’re showing it to, to scan the QR code,” he told Checkpoint.

“The ultimate stage for us to get to something that’s internationally transferable and internationally recognised, obviously New Zealand can’t do that alone so we’ll need to be working with other countries.”

This is from 12 September