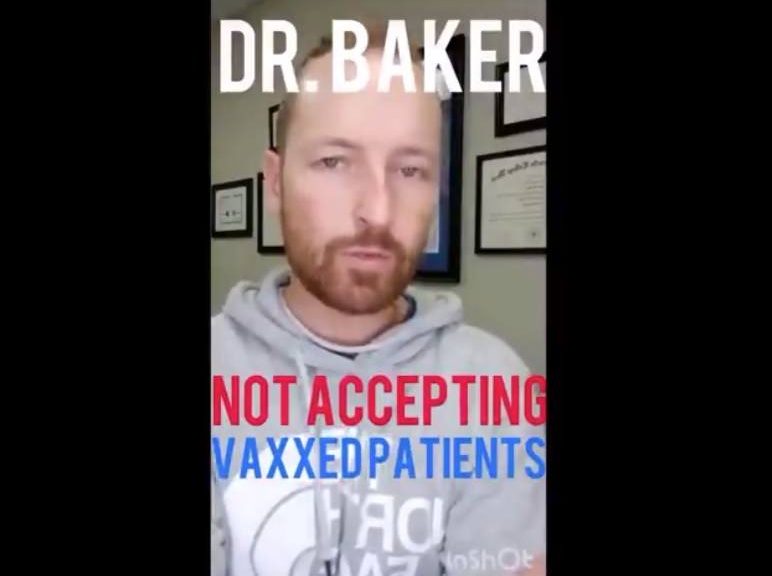 Dr. Steven Baker, D.C., announced recently that he is not accepting patients who have received one of the COVID-19 injections due to concerns of transmission and affecting those who have not received the shots, particularly pregnant patients.

A couple of weeks ago we published the video round-table discussion with 5 medical doctors on the issue of people receiving the COVID-19 injections transmitting something, somehow to those people who have not received the shots. Most of the reports have been coming from women who have reported menstruation difficulties, heavy bleeding, miscarriages, and reduction of breast milk.

Dr. Larry Palevsky, Dr. Sherri Tenpenny, Dr. Christiane Northrup, Dr. Carrie Madej, and Dr. Lee Merritt were the participants in the discussion, and since publishing their video on April 25th, at the time of publication of this article, it has been viewed by over 777,000 people in the Health Impact News network. See:

URGENT! 5 Doctors Agree that COVID-19 Injections are Bioweapons and Discuss What to do About It

As one can imagine, their video has spurred a lot of discussion and research into this matter, and I would like to summarize some of what others have discovered about these bioweapons, incorrectly called “vaccines,” in this article.

Evidence that Transmission from Vaxxed to Unvaxxed is Intentional

A lot of people have searched the medical studies to find out that plans to develop a “vaccine” that would transmit something and infect other people has been in the works for some time.

One of the most explosive studies that just came out recently was published by the Salk Institute and titled: The novel coronavirus’ spike protein plays additional key role in illness. While this study does not deal with “transmission” specifically, it does conclude that the spike proteins cause vascular disease, including blood clots.

Mike Adams from NaturalNews.com wrote what I found to be the most comprehensive article discussing this study, and others.

Critically, all four covid vaccine brands currently in widespread use either inject patients with the spike protein or, via mRNA technology, instruct the patient’s own body to manufacture spike proteins and release them into their own blood. This floods the patient’s body with the very spike protein that the Salk Institute has now identified as the smoking gun cause of vascular damage and related events (such as blood clots, which are killing many people who take the vaccines).

Put simply, it means the vaccines were designed to contain the very element that’s killing people.

The false assumption of the vaccine industry and its propagandists is that the spike protein is “inert” and harmless. The Salk Institute proves this assumption to be dangerously inaccurate….

mRNA vaccines transform the human body’s own cells into spike protein factories, spilling deadly spike protein particles into the bloodstream. A growing number of researchers are also finding that these spike proteins appear to be “shedding” or transmitting from the vaccinated to the unvaccinated, causing adverse reactions in people who were never vaccinated themselves, but who have spent time close to other people who were.

The technology behind this is called “self-replicating vaccines,” and it was pioneered by doctors and scientists working under the racist Apartheid regime of South Africa. There, medical researchers designed race-specific, weaponized, self-replicating vaccines that were designed to spread through the Black population of South Africa and exterminate the masses who posed a threat to the ruling technocratic elite. Today, we are all the targets of these weapon systems as globalists seek to exterminate human populations on a global scale, regardless of skin color or country of origin.

Just this year, the Johns Hopkins Bloomberg School of Public Health has celebrated this self-replicating vaccine technology and is calling for it to be used to achieve global mass vaccination, augmented by surveillance drones and AI robots that enforce vaccine compliance (probably at gunpoint).

In effect, mRNA vaccines function as bioweapons factories that turn human beings into biological weapon manufacturing and transmission hubs, spreading vascular damage and death to the entire population, including those who were not yet vaccinated.

David Icke out of the UK produced a video on this topic, and he theorized that what is being transmitted are radio frequencies, perhaps activated by 5G signals or other microwaves.

Makia Freeman of The Freedom Articles has written about Icke’s video (link included) and this phenomenon.

The COVID vax transmission phenomenon has now become well-known. Many have experienced it.

The COVID vaxxed are transmitting something to those around them (including many unvaccinated people) that is causing those around them to suffer strange symptoms (migraines, nosebleeds, bruising, bloating, period pain, serious irregularity with menstruation, etc.).

In my previous article which covered this topic, I ended by offering up a theory that the ultimate cause of this bizarre phenomenon was resonance or frequency.

In this article, I will expand upon this idea some more. It just so happened that David Icke did a recent video (Human Antenna – Broadcasting The Vaccine Frequency) where he elaborates upon this subject, and as usual, his ideas are extremely important to consider.

What is going on here is unprecedented; never before in history (that I am aware of) has a so-called ‘medicine’ or ‘treatment’ (the COVID non-vaccine) ended up spreading to those who didn’t take it to cause them tangible harm as is happening right now.

Read the full article at The Freedom Articles.

Evidence to this theory of transmission that the injected material from the experimental COVID shots make people “Transmitter-Recevier Antennas,” are the increasing amount of videos being shown online where people who get one of the COVID-19 shots can now have magnets stick to their body at the injection site.

Here is one that contains 4 videos, from our Rumble channel (should also be on Bitchute soon).

Lastly, a short clip of an upcoming video featuring an interview with Dr. Judy Mikovits, has Dr. Mikovits saying that there is a known “antidote” for the COVID-19 injections to protect oneself from being contaminated with these “spike proteins.”

She claims that the known “antidote” for protecting oneself from those who have received the COVID shots is something called “Suramin.”

Ariyana Love has done some research on Suramin and discovered that it is in pine needles, and discusses how to brew one’s own “pine tea.”