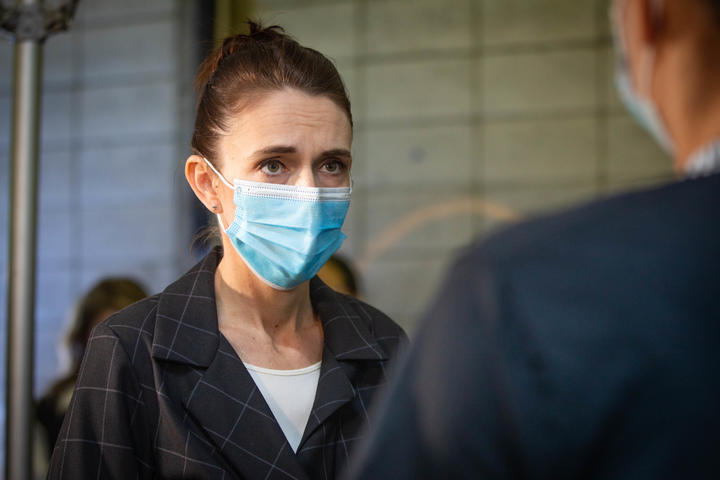 Prime Minister Jacinda Ardern says mask-use will continue to be a key part of the measures to contain Covid-19 spread in the community. Photo: RNZ / Angus Dreaver

But Prime Minster Jacinda Ardern cautioned against people thinking the move signalled the end of Covid-19 restrictions and said mask use would remain key – even under the orange traffic light setting.

She told Morning Report the decision to stop requiring vaccine pass use had been taken because the impact they were having was considered marginal in the current context.

New Zealand now had very high vaccination rates and a large number of those who remained unvaccinated had potentially already contracted the virus by now, Ardern said.

“The point we used them was at a really critical point.

“We were – in Auckland back when they were introduced – trying to exit a lockdown based on Delta. We knew that the impact that vaccines had on transmission was significant, and the protection they provided significant, and it was also a way of protecting the unvaccinated against high-risk environments.

“The equation’s changed quite a bit since then, but in those four months, they have made a big difference.”

The country’s Covid-19 traffic light settings will also be reviewed today, with Ardern due to address any decisions made at this afternoon’s post-Cabinet press conference.

She said precautions that were known to be effective in preventing the spread of Covid-19, such as mask use and gathering restrictions, would continue to be required, even if it was decided that parts of the country could move to the orange setting.

There was no consideration being given to dropping or loosening mask requirements, Ardern said.

“Mask use continues to be a very important tool at red and orange in particular … studies show they cut transmission risk; they make it safer for everyone.”

“We’ve got to normalise the practice of wearing masks inside, particularly in poorly ventilated settings, it does make a difference, it does limit the spread,” he said.

However his party did not believe the traffic light system was fit-for-purpose and wanted to see it scrapped.

“Our preference would be for everyone to go to orange and … we would like to see the abolition of the traffic light framework altogether.”

Bishop said the system was “highly confusing” and New Zealanders should be allowed to get back to “living their lives”.

“It is time to get back to some form of normality.”

He acknowledged dropping restrictions – including today’s move on vaccine pass use – could make vulnerable people nervous but said it was always a balancing act.

“What you do find is that people will self-regulate a little bit.”

“There are people who … will go out a bit less, they’ll go out in fewer groups, they perhaps won’t catch up with friends and family to the same extent that they otherwise would have.”

“They protect you and if you’re wearing a mask, you’re also protecting the people around you and some of those people may not be able to wear a mask for other reasons or may need that extra protection … because they’re at higher risk.”

The burden of mask-wearing was felt by people in lower paid jobs so it was important they had support to ensure access to good quality masks, he said.

“That includes them on their way to and from work as well.”

“There’s an opportunity for business, in particular those hospitality businesses to be doing something to make sure that they’ve got really good ventilation systems in place.”

Ardern said any decision on regions moving from red to orange would be informed by a range of factors, including overall case numbers and hospitalisation rates.

Case numbers in Auckland, Wellington and Tairāwhiti were beginning to decline, she said, but in some other parts of the country cases were continuing to climb.

Ardern noted that in other countries where cases were still climbing, it had been unusual for restrictions to be lifted or substantially changed.

“Where they have sometimes (loosened or dropped restrictions) they’ve seen [case] increases, so we will be cautious.”