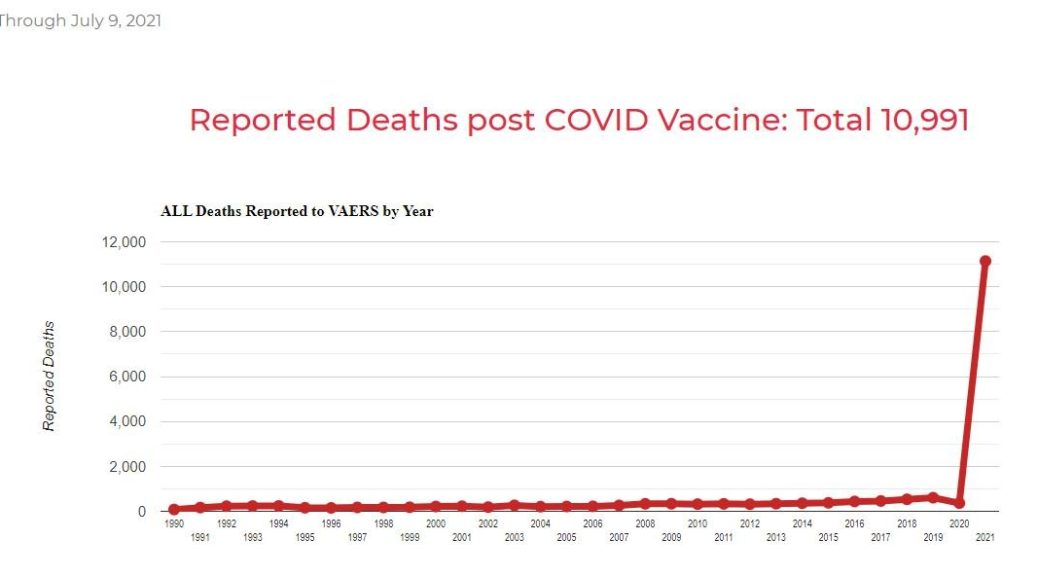 The website has now recorded 11,140 reported deaths from the COVID vaccine in the United States.

This is up from 9,125 reported deaths from the COVID-19 vaccinations total from last week. The number of deaths linked to vaccines this year has absolutely skyrocketed. According to the CDC’s own data.

On Wednesday the CDC posted on its own website that there were 12,313 reported deaths from the COVID Vaccine since December.

This number would track with the VAERS website number. But then a strange thing happened.  After the CDC posted this number they went back hours later and switched it to 6,079 reported deaths in the US from the COVID Vaccine.

Infowars posted video of screengrabs from the CDC website on Wednesday.
The CDC deleted 6,000 vaccine deaths from its website in 6 hours.
What gives?

Dr. McCullough is an internist, cardiologist, epidemiologist, and Professor of Medicine at Texas A & M College of Medicine, Dallas, TX USA. He maintains ABIM certification in internal medicine and cardiovascular diseases. He practices both internal medicine including the management of common infectious diseases as well as the cardiovascular complications of both the viral infection and the injuries developing after the COVID-19 vaccine. Since the outset of the pandemic, Dr. McCullough has been a leader in the medical response to the COVID-19 disaster and has published “Pathophysiological Basis and Rationale for Early Outpatient Treatment of SARS-CoV-2 (COVID-19) Infection” the first synthesis of sequenced multidrug treatment of ambulatory patients infected with SARS-CoV-2 in the American Journal of Medicine and subsequently updated in Reviews in Cardiovascular Medicine. He has 46 peer-reviewed publications on the infection and has commented extensively on the medical response to the COVID-19 crisis in TheHill and on FOX NEWS Channel. On November 19, 2020, Dr. McCullough testified in the US Senate Committee on Homeland Security and Governmental Affairs and throughout 2021 in the Texas Senate Committee on Health and Human Services, Colorado General Assembly, and New Hampshire Senate concerning many aspects of the pandemic response. Dr. McCullough has had one full-year of dedicated academic and clinical efforts in combating the SARS-CoV-2 virus and in doing so, has reviewed thousands of reports, participated in scientific congresses, group discussions, press releases, and has been considered among the world’s experts on COVID-19.

Alabama Republican Governor Kay Ivey has joined the Biden Administration and the CDC in attacking “unvaccinated” residents in her own state, blaming them for rising “cases” of COVID-19.

Her handlers, who are undoubtedly among the Big Pharma lobbyists, are apparently putting pressure on her to get in line with this narrative as Alabama has the lowest COVID-19 vaccination rate in the country.

The Republican governor of Alabama has said it is “time to start blaming the unvaccinated folks” for rising cases of Covid-19, amid concern that months of misinformation over the need and efficacy of vaccines is fueling a resurgence of coronavirus infections in several states.

Kay Ivey said that vaccines are “the greatest weapon we have to fight Covid” and added that a surge in new cases of the coronavirus in Alabama is due to a reluctance among many people in the state to get inoculated.

Only about a third of eligible people in Alabama have got a vaccine shot, one of the lowest rates in the US.

Ivey added that nearly all the new hospitalizations and deaths due to Covid are unvaccinated people. “These folks are choosing a horrible lifestyle of self-inflicted pain,” she said. (Source.)

It should be noted that like other Republican Governors, Ivey signed a bill in May that prohibits businesses and other institutions in Alabama from requiring “vaccine passports” that verify the immunization status of people as a condition for entry or services.

But as we have previously reported, that doesn’t mean that she, or any other Republican Governor, is against the COVID-19 injections and all the harm they are causing.

Florida Governor Ron DeSantis, while stopping short of actually blaming the “unvaccinated” for current “outbreaks” as Governor Ivey did, nevertheless is also promoting the same narrative put out last Friday by the CDC and Biden administration, by repeating the lie that almost all hospitalizations right now are among the “unvaccinated,” because the COVID-19 “vaccines are saving lives.”

Israel’s Ministry of Health’s figures claims that only 45 deaths occurred in proximity to vaccination. As the report states, this “smokescreen”, lack of transparency and deception only leads to more deaths.

If the figures contained within the IPPC report are valid, then more Israelis have died from the Pfizer jab than have Europeans from the AstraZeneca jab throughout the entirety of Europe.

The report warns: “According to data from the Central Bureau of Statistics (CBS), during January-February 2021, in the midst of the vaccination operation, there was a 22% increase in overall mortality in Israel compared to the bi-monthly average mortality in the previous year.

“In fact, the period of January-February 2021 is the deadliest one in the last decade, with the highest overall mortality rates, when compared to the corresponding months over the last 10 years.”

The report highlights that younger people between the ages of 20-29 appear to be the demographic that saw the most dramatic increase in mortality following the rollout of the Pfizer vaccine.

“In this group, during the same vaccination period, January-February 2021, there has been a 32% increase in overall mortality compared to the bi-monthly average mortality in 2020.

“There is a high correlation between the number of people vaccinated per day and the number of deaths per day, in the range of up to 10 days post-vaccination in all age groups.

The staff of the hospital in Montelimar, in the French department of Drome, have gone on indefinite strike to protest the new rules demanding they take a vaccine against Covid-19 by mid-September or face losing their jobs.

The strike against “forced vaccination” was announced on Thursday by the CGT-GHPP trade union, and affects some 200 doctors and 1,500 nurses in the southeastern French city.

Hundreds of them gathered outside the hospital on Friday, denouncing lockdowns and vaccine mandates and chanting “liberté!” (freedom).

The French legislature is finalizing the proposal that would require all medical professionals in contact with the vulnerable to be fully vaccinated by September 15, or else lose their salaries and even their jobs.

“We are against mandatory vaccination and vaccine coercion,” Elsa Ruillere, local union representative, told Sputnik France. “There is no choice between tests or vaccination: vaccination is compulsory. No, we don’t agree. We want to have the choice like the rest of the world and we do not want compulsory vaccination.”

The list of attractions that could be forced to mandate vaccine passports as a condition of entry is already growing, with minister Nadhim Zahawi listing other “crowded venues” that may have to ban the unvaccinated.

On Monday, Prime Minister Boris Johnson made a mockery of ‘freedom day’ – when all coronavirus restrictions were supposed to be lifted – by announcing that nightclubs would be made to check for vaccine status on the door.

Despite widespread backlash to the idea and the potential for a defeat when it comes to a vote in Parliament, vaccines minister Nadhim Zahawi indicated today that the program could be extended further.

During a speech to the Commons, Zahawi said sporting and business events, churches, music venues and festivals would also be subject to the rules, which are expected to come into force at the end of September.

“We reserve the right to mandate its use in the future,” he said.

Zahawi also asked venues to make providing evidence of taking the jab or a negative test a condition of entry before September despite the fact that it’s not the law.

“Although we don’t encourage its use in essential settings like supermarkets, other businesses and organisations in England can adopt the pass as a means of entry where it is suitable for their venue or premises when they can see its potential to keep their clients or their customers safe,” he said.

As we previously highlighted, some nightclub owners are already saying they will refuse to follow the law because the system will be unworkable and wipe out profit margins.

It remains to be seen whether the entire issue is just a PR stunt to bully younger people into taking the vaccine or whether it will actually be implemented.

The government previously assured the public that vaccine passports would not be introduced for domestic purposes, even going so far as to label the practice “discriminatory.”

Despite widespread unruly protests in France forcing President Macron to walk back part of a similar plan, a vaccine passport will still be required to access a multitude of venues, including bars, cafes and public transport.

House Democrats on Tuesday blocked a GOP bill which would require the Director of National Intelligence to declassify information related to the US government’s investigations into the Wuhan coronavirus pandemic – and in particular, what role the Wuhan Institute of Virology may have played in the outbreak.

Alabama governor says ‘it’s time to start blaming the unvaccinated’ as COVID continues to hammer the South with Missouri, Florida and Texas accounting for 40% of new cases in the US

The Italian prime minister, Mario Draghi, told a press conference Thursday that the country will need to act and suppress another wave of COVID-19 infections at a time the Delta variant is spreading throughout Europe.

The green pass — a digit certificate containing proof of immunization will be necessary for anyone older than 12 to enter stadiums, museums, theatres, cinemas, exhibition centers, swimming pools, and gyms. The pass is an extension of the EU’s digital Covid certificate and will also be required for restaurants.

The updated version of the vaccine passport will begin on Aug. 5 and didn’t sit well with residents who see their freedoms whittled away by the government. This violation of freedom sparked a massive protest in Turin.

“As soon as the Italian government announced the introduction of the “health passport” people took to the streets to protest. The images below are from Torino just now. The feeling in the streets is one of anger at the government’s decision,” the Twitter user said.

Like the thousands of French citizens protesting in the streets in the past week, the Italian people were outraged by additional restrictions.

The removal of COVID measures to restart European economies was widely hailed as a success. Still, the new Delta variant is causing concern and giving politicians the optimal cover to implement more populous control via green passes.