I dislike hypocrisy and double standard.

Never mind the fact that those who would like us to be locked down, to eat insects and when we can go anywhere, let it be in an electric car.

Never mind that they all arrived in their private jets…. 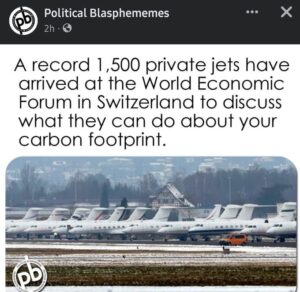 We have this on record

….In the video below, one of the speakers at the meeting asked, “So I’m going to throw this immediately out to the audience and say, how many of you are driving any electric vehicle at the moment?” Take a look.

After waiting a moment, she answered and completely shredded the climate change agenda by admitting, “One, two, three, four. So, I would say that probably constitutes less than 5% of the people sitting here in this room.” Not only that, many of the members who traveled to Davos, Switzerland for the meeting did so via private jet.

One of those members was none other than former U.S. Secretary of State and Senator John Kerry. Speaking on Tuesday, he stated that technology can supposedly be used to help fight climate change. “We have the basic technologies now already deployed, to get where we need to in the next eight years to meet the goal of a 45% reduction [in emissions]. But we do not have yet the technologies fully brought to scale and developed sufficiently. We can’t do it, folks, if the new theology is going to become, ‘We’ve got to build out a massive gas infrastructure without regard to abatement and mitigation of that gas.’”

Working alongside another panelist Xie Zhenhua, the climate specialist from China added, “In recent years in China, the proportion of coal in the energy system has dropped from 74% to 56%. We have developed renewable energy and the capacity has already reached the 1 billion kilowatts per hour and for seven consecutive years, our investment in sustainability has been over 100 billion yen. Our focus is trying to build a system based on renewable energy and we are trying to move away from fossil fuels.

“Also, we have announced that we will stop building coal power plants abroad. In terms of a green cover, China accounts for 25% of the world. In the following decade, China plans to plant 700 million trees to make our contribution [to our joint agreements]. So, it doesn’t matter how you say it, what matters is how you do it.”