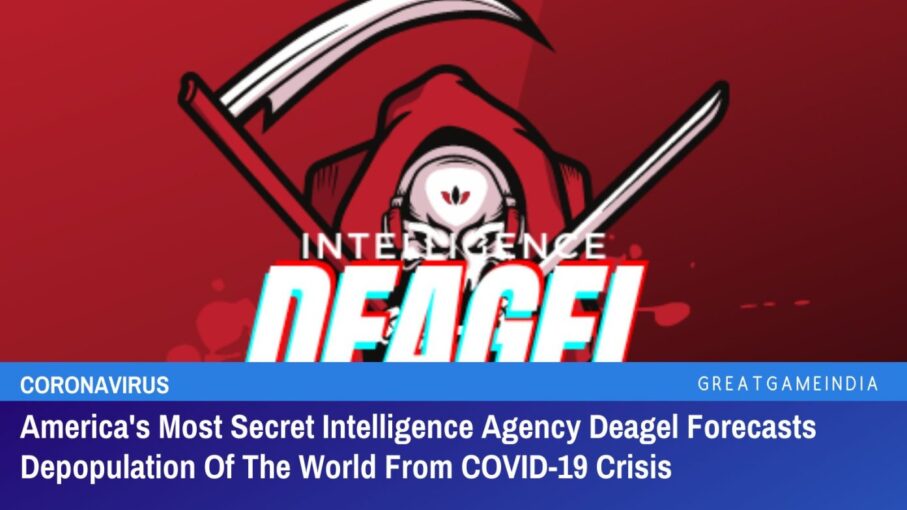 Deagel.com JUST REMOVED 2025 FORECAST(predicting a 70% drop in the US population to 99 million)

On 4/20/21, Deagel.com, a military intelligence agency, has deleted their mysterious 2025 forecast spreadsheet that predicted a major collapse of the western countries.

The forecast used to exist at [link to deagel.com (secure)] and now that page just redirects to the home page.

I just so happened to make a brief screen recording of the forecast on 4/19/21, one day before it was deleted:

find it interesting that this deletion was made within 24 hours of every American over the age of 16 qualifying for their COVID-19 vaccine.

One of America’s most secret intelligence agency Deagel forecasts in its latest report, the depopulation of the world because of the COVID-19 crisis and the Great Reset.

Deagel states that the formerly known as second and third world nations are an unknown at this point. Their fate will depend upon the decisions they take in the future. If they remain tied to the former World Order they will go down along Western powers.

Deagel is America’s most secret intelligence agency – so secretive that few people know of its existence and others claim the organization doesn’t legitimately exist at all.

Despite the overwhelming suppression of its significance, Deagel is routinely used by the CIA and other security outfits.

WikiLeaks documents have revealed Deagel was legitimately used as reference material in a Stratfor report on the technological capabilities of The People’s Republic of North Korea.

Stratfor is known in the intelligence community as Consultant CIA or Shadow CIA.

According to their own website, deagel.com, Deagel provides news and intelligence on international military aviation and advanced technologies.

There website has articles dating back to 2003, but little is known about the real owners.

Deagel’s reports, in particular the aforementioned research on North Korea, were also provided to the President during Presidential Dialy Briefings.

Depopulation Due To COVID-19 Crisis

This highly regarded intelligence organization has a grim outlook for the United States and the world in the coming years including a significant decrease in population.

Deagel has for some time now predicted in its forecast for 2025 a steep decline in US population and that of the world.

Excerpts from the unnerving forecast are provided below:

In 2014 we published a disclaimer about the forecast. In six-years the scenario has changed dramatically. This new disclaimer is meant to single out the situation from 2020 onwards.

Talking about the United States and the European Union as separated entities no longer makes sense. Both are the Western block, keep printing money and will share the same fate.

After COVID we can draw two major conclusions:

1. The Western world success model has been built over societies with no resilience that can barely withstand any hardship, even a low intensity one. It was assumed but we got the full confirmation beyond any doubt.

2. The COVID crisis will be used to extend the life of this dying economic system through the so-called Great Reset.

The Great Reset; like the climate change, extinction rebellion, planetary crisis, green revolution, shale oil (…) hoaxes promoted by the system; is another attempt to slow down dramatically the consumption of natural resources and therefore extend the lifetime of the current system.

It can be effective for a while but finally won’t address the bottom-line problem and will only delay the inevitable.

The core ruling elites hope to stay in power which is in effect the only thing that really worries them.

The collapse of the Western financial system – and ultimately the Western civilization – has been the major driver in the forecast along with a confluence of crisis with a devastating outcome.

As COVID has proven Western societies embracing multiculturalism and extreme liberalism are unable to deal with any real hardship.

It is quite likely that the economic crisis due to the lockdowns will cause more deaths than the virus worldwide.

The stark reality of diverse and multicultural Western societies is that a collapse will have a toll of 50 to 80 percent depending on several factors but in general terms the most diverse, multicultural, indebted and wealthy (highest standard of living) will suffer the highest toll.

The only glue that keeps united such aberrant collage from falling apart is overconsumption with heavy doses of bottomless degeneracy disguised as virtue.

Nevertheless, the widespread censorship, hate laws and contradictory signals mean that even that glue is not working any more. Not everybody has to die. Migration can also play a positive role in this.

The formerly known as second and third world nations are an unknown at this point. Their fate will depend upon the decisions they take in the future.

Western powers are not going to take over them as they did in the past because these countries won’t be able to control their own cities far less likely countries that are far away.

If they remain tied to the former World Order they will go down along Western powers.

There is a lot of bad blood in the Western societies and the protests, demonstrations, rioting and looting are only the first symptoms of what is coming. However a new trend is taking place overshadowing this one.

Six years ago the likelihood of a major war was tiny. Since then it has grown steadily and dramatically and today is by far the most likely major event in the 2020s.

Another particularity of the Western system is that its individuals have been brainwashed to the point that the majority accept their moral high ground and technological edge as a given.

This has given the rise of the supremacy of the emotional arguments over the rational ones which are ignored or deprecated. That mindset can play a key role in the upcoming catastrophic events.

Over the next decade it will become obvious that the West is falling behind the Russia-China block and the malaise might grow into desperation.

Going to war might seem a quick and easy solution to restore the lost hegemony to finally find them into a France 1940 moment.

If there is not a dramatic change of course the world is going to witness the first nuclear war. The Western block collapse may come before, during or after the war.

It does not matter. A nuclear war is a game with billions of casualties and the collapse plays in the hundreds of millions.

An interesting statement regarding the forecast was made by the authors on Deagel’s forecast page on October 26, 2014.

Historically a change in the economic paradigm has resulted in a death toll that is rarely highlighted by mainstream historians.

When the transition from rural areas to large cities happened in Europe many people unable to accept the new paradigm killed themselves.

They killed themselves by a psychological factor. This is not mainstream but it is true. A new crisis joins old, well known patterns with new ones.

We are not a death or satanic cult or arms dealers as some BS is floating around the internet on this topic.

Take into account that the forecast is nothing more than a model whether flawed or correct. It is not God’s word or a magic device that allows to foresee the future.

The study falsely claimed that population growth in the so-called Lesser Developed Countries (LDCs) like India was a grave threat to U.S. national security.

Adopted as official policy in November 1975 by President Gerald Ford, NSSM 200 outlined a covert plan to reduce population growth in those countries including India through birth control, and also, implicitly, war and famine.

Brent Scowcroft, who had by then replaced Kissinger as national security adviser, was put in charge of implementing the plan.

CIA Director George Bush was ordered to assist Scowcroft, as were the secretaries of state, treasury, defense, and agriculture.

The bogus arguments that Kissinger advanced were not original.

One of his major sources was the Royal Commission on Population, which King George VI had created in 1944 “to consider what measures should be taken in the national interest to influence the future trend of population.”

The commission found that Britain was gravely threatened by population growth in its colonies – the biggest being India, since “a populous country has decided advantages over a sparsely-populated one for industrial production.”

The combined effects of increasing population and industrialization in its colonies, it warned, “might be decisive in its effects on the prestige and influence of the West,” especially effecting “military strength and security.

NSSM 200 similarly concluded that the United States was threatened by population growth in the former colonial sector.

It claimed that population growth in those states was especially worrisome, since it would quickly increase their relative political, economic, and military strength.

This policy, known infamously as ‘Depopulation Policy’ and now being normalised through Hollywood movies, the latest being personified by Thanos in Marvel’s Infinity War was imported to India via the United Nations’ Agenda 21.

Sadly many successive Indian Prime Ministers have been implementing this dangerous policy.

The new Population Control Law being advocated recently is actually Agenda 21 which is a British policy to reduce the population of former colonies like India through various sterilization projects and other policies implemented through the United Nations and popularised by Hollywood to effectively keep nations under Anglo-American orbit.