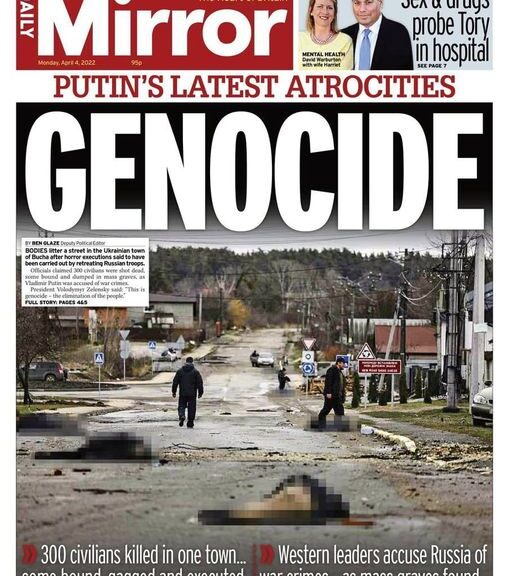 Bucha: More Lies
Here is my video that I have made that incorporates footage with Gonzalo’s commentary
Some of the footage from western media. This incorporates some of the video footages Gonzalo talks about.

POSTSCRIPT: This video seems to indicate that Ukrainian solders in BLUE armbands singled out citizens in WHITE armbands and shot them.

This video is a must-see that neatly presents the currently known evidence being passed around in the resistance sphere into one convenient presentation which appears to prove that the Ukrainian army in fact executed Russian sympathizers with white armbands in Bucha and tried to pass them off as Russian genocide. Of course this is only part of the picture, as there are many other bodies discovered beyond the ones shown in the video, particularly in the ‘mass grave’ currently being shown all over twitter that shows civilians covered in dirt, dug up from the ground. But the above video very strongly points the finger in the Ukrainian direction.

And after all, hasn’t it been Russia that has repeatedly been proven right in every single such high profile atrocity/accusation so far? For instance when the Russian POW torture video came out, it was Ukraine that cried “fake” until days later all western ‘authorities’ were forced to admit it was real. When the ‘maternity hospital’ falseflag in Mariupol occurred, Kiev supporters blamed Russia and once again Russia was the one proven right and vindicated when the pregnant girl at the center of it herself released an interview completely refuting Ukr lies, and stating that not only did Ukr soldiers turn the hospital into a barracks but stole the precious food from pregnant women and then shelled the hospital themselves. And much earlier, when Ukr claimed Russia bombed an ‘innocent’ civilian mall, yet the very next moment the Russian MOD released detailed videos showing precisely how Ukrop forces positioned mobile artillery in the parking garage of the said ‘mall’. When Ukrops claimed Russia tried to blow up the Zaporizhzhia plant, yet security footage showed that as a Russian security force arrived, it was fired upon by an RPG from Ukrop positions in one of the administrative buildings of the plant. Or when the famed American journalist was killed in Irpin right outside Kiev a month ago, and all Ukr supporters shouted Russia, but the entire incident was quickly swept under the rug when the journalist’s own friend/companion in an interview stated they were fired upon by Ukrop troops at a Ukrop checkpoint miles away from the nearest Russian forces. So the track record shows over and over that these incidents are invariably revealed as Ukrainian lies and this new provocation is clearly another in a long line.

The following is what Sputnik is saying about this: Earlier, Ukrainian authorities claimed that they have found the bodies of civilians lying in the streets of the city of Bucha in the Kiev region, claiming that they had been killed by Russian troops, who had been stationed in the city until several days ago.
Russia’s Defence Ministry has rejected allegations promulgated by Kiev, claiming that Russian troops had killed civilians in the Ukrainian city of Bucha. The ministry stated that the images and videos claiming to depict dead civilians on the streets of Bucha were staged photos and videos created specifically to distribute via the western media.

“[These images are] yet another provocation. During the time this settlement was under the control of the Russian armed forces, not a single local resident was hurt […][This is] yet another example of providing staged material from the Kiev regime for the consumption of western media, as it was the case with the Mariupol maternity hospital, not to mention other cities”, the ministry said.

The defence ministry stressed that Russian troops abandoned the city on 30 March and reminded the audience that the city’s mayor, Anatoly Fedoruk, confirmed this fact the next day. Furthermore, the mayor never mentioned in his 31 March that any civilians had been shot in the street with their hands tied, as claimed by Kiev.
During the whole time – right up until Sunday – that the city was under the control of Russian troops, residents of Bucha could move freely and had access to cell networks, the defence ministry stressed.
The ministry further noted that the images of the bodies on the streets emerged four days after the Russian troops left the city and immediately after the Ukrainian Security Service (SBU) and the Ukrainian media arrived at the scene. The bodies which have been videoed and photographed show no signs of rigor mortis or lividity, and the blood on the wounds is fresh.
According to the Russian Defence Ministry, the residents of Bucha had several possibilities for leaving the city, except for from the South which was routinely shelled by Ukrainian forces who targeted, among other things, residential quarters using artillery, tanks and MLRSs.
Russian troops withdrew from Bucha after the last set of talks between Russia and Ukraine, during which Moscow announced a military de-escalation, which includes drastic reduction of military activities in the direction of Kiev. The Kremlin explained it was taking that step to ensure the safety of decision-makers in Kiev to expedite talks.
The talks are aimed at ending Russia’s special military operation in Ukraine, which was launched by President Vladimir Putin on 24 February in response to a request for help from the Donetsk and Lugansk People’s republics (DPR and LPR). The latter had said that there had been intensified shelling by Ukrainian armed forces and nationalist battalions in the weeks running up to the start of the operation.

Over the past 24 hours, the Western media have been fueling allegations that Russia committed mass killings of civilians in the Ukrainian city of Bucha as footage has shown city streets strewn with bodies. The Russian Defence Ministry dismissed the accusations, underscoring that the footage is nothing short of yet another provocation.
With Kiev quickly accusing Russia of “genocide” and “massacre” in Bucha, Western media seems eager to automatically criminalise Moscow without a full investigation – and it looks like the media is a tool for the West to make up for frustrations caused by the failures of its own propaganda, experts have stated.
Doubts were cast at allegations that Russia is behind the purported “war crimes” in Bucha shortly after a video posted by one of the Kiev territorial defence battalion leaders resurfaced online. In the video, titled “BOATSMAN BOYS’ work in Bucha”, fighters are heard asking whether they can shoot people without blue armbands (an identifier of the Ukrainian forces) – and receiving “F***, of course!” in response.
Vanessa Beeley, an independent investigative journalist, points at how “NATO-aligned” media plays its role to “protect their ‘side’ from repercussions for the war crimes they have been committing for decades“, while also highlighting inconsistencies in the Western-promoted narrative.

“Yet we are supposed to believe that a Russian army withdrawing to preserve civilian lives as it has done consistently during its military campaign in Ukraine – is responsible for the execution of Ukrainian civilians including Russian speakers, whose protection was one of the main triggers for this incursion into Ukraine to ‘Denazify’ the territory,” Beeley says.

The sentiment is echoed by Joe Quinn, political commentator and author, who says that it was “entirely plausible” that that Ukrainian military policy was to shoot anyone on the street that did not have a blue armband, and in particular those with a white armband – a sign recognized as an identifier of the Russian military.
According to Quinn, it was possible that some of the Bucha civilians wore white bandages as a sign of friendliness towards the Russian military, prompting the Ukrainians to assume that everyone with that bandage was somehow aligned with the Russian forces.

Quinn notes that this is not the first time when Ukrainian forces have fired at civilians, recalling the case of Mariupol when “the Ukrainian military fired on humanitarian corridors set up by the Russians in an attempt to kill Russian soldiers, prevent civilians from leaving, and killing civilians in the process.”

“On March 26, the Russian military in Bucha established a corridor for civilians to leave towards Belarus. Were the civilians on the street in Bucha killed at that time or in the following days by Ukrainian artillery fire? It is certainly a more plausible explanation than the irrational claim that retreating Russian soldiers decided to indiscriminately ‘shoot’ civilians on the street in Bucha,” Quinn says.

The Western media push to stick to the Russia-blaming narrative can be explained by the West’s frustration over its propaganda “falling on deaf ears”, according to Adriel Kasonta, a London-based foreign affairs analyst and former chairman of the International Affairs Committee at the Bow Group think tank.
“They will do whatever it takes, including propaganda, to smear Russia to somehow destroy the good name of Russia,” Kasonta suggests, saying that such efforts can stem from the West’s opposition to the idea of someone in Kiev being in favour of a peace agreement with Russia.
He also said that it can relate to the fact that Russia has made significant steps towards financial and economic independence from the West and stronger ties with China and India, which “is causing a huge frustration” in the West.
Amid intense efforts to fuel the anti-Russia narrative, Kasonta says, more incidents similar to that in Bucha can be expected to occur – along with “many more accusations from the so-called reputable institutions like Human Rights Watch and others.”
“I think that there will be a lot of false flag operations, a lot of poking, so to speak, the so-called Russian bear in the eye and trying to provoke Russia to make a mistake,” Kasonta says.
This video is from yesterday and refers to some other propaganda coming out of Ukraine

Ultracool Girl video: https://twitter.com/realgonzalolira/s…
All the clips that were in this livestream can be found on my Telegram channel at this post and subsequent posts : https://t.me/realCRP/4104
POSTSCRIPT
From Petri Krohn, via Facebook
THE MESSAGE: “COLLABORATORS WILL BE SHOT” 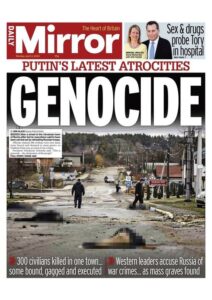 There is a simple and obvious explanation to the events. Ukrainians considered all civilians that had stayed behind to be collaborators. The first Ukrainians that entered the area searched every house for “​​saboteurs and accomplices of Russian troops.” If they spoke Russian and did not immediately shout Slava Ukraini! in Ukrainian, they were shot on the spot. This would explain the somewhat even distribution of bodies on the road.
In some cases people were simply shot for being on the road. There are two cases of cyclist dying on bicycles. A fast moving Ukrainian patrol shot at incoming traffic. This would be similar to the Rozsypne Road of Death massacre in Donbass in 2014.
Russia claims they left Bucha on March 30th. Ukranians officially only entered on April 2nd. This would give the CIA death squads 72 hours or at least two whole days to operate.
The massacre is a serious step in the escalation towards World War 3. The Western public believes the Ukrainian narrative, that “Russians did it”. The real audience of the massacre may however be Ukrainians. The message could not be clearer: “All collaborators will be shot!”