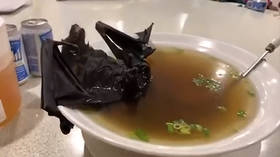 Peter
Andrews is an Irish science journalist and writer, based in London.
He has a background in the life sciences, and graduated from the
University of Glasgow with a degree in Genetics

A
group of Chinese scientists today reported that the likely source of
the deadly 2019‐nCoV virus is snakes, based on genetic analysis.
However, grisly images from a Chinese restaurant suggest bats may
also be on the menu.

Their
findings were fast-tracked to publication yesterday in the Journal of
Medical Virology, and report that infected people were exposed to
various wildlife species at the market, where live poultry, seafood,
bats and snakes among others, were present.

A
detailed genetic analysis of 2019‐nCoV revealed that it is a new
strain which seems to be a mixture of two other coronaviruses; one of
which is from bats and another unknown strain. The group presented
evidence that the last place the virus resided before hitting humans
was a snake species, based on certain biological markers in the
virus’s surface proteins. These proteins are what allow viruses to
invade host cells, and the mutated form is allowing 2019‐nCoV to
easily attack human cells.

So
according to the scientists, at some point a bat virus jumped into
snakes, and adapted to its immune system. Later, people at the Wuhan
market either handling or eating snake meat became infected. But
images surfacing from Wuhan, and released by the Daily Star Online,
offer another, even grosser explanation. Could the virus have leapt
directly to humans from bats?

Different
cultures eat exotic foods, and Chinese people are well known for
having a taste for some meats that might raise eyebrows or even churn
stomachs. But bat soup?! Amazingly, it is apparently very popular in
China, and considered a delicacy there.

@Dystopia – #HongKong is NOT China@Dystopia992

diners’ desk.#Wildlife animals hv ALWAYS been “delicacies” in #China, some even claim they can improve health & sex performance.

Let’s NOT forget #Bats are reservoirs for <60 viruses.#coronavirus #Wuhan 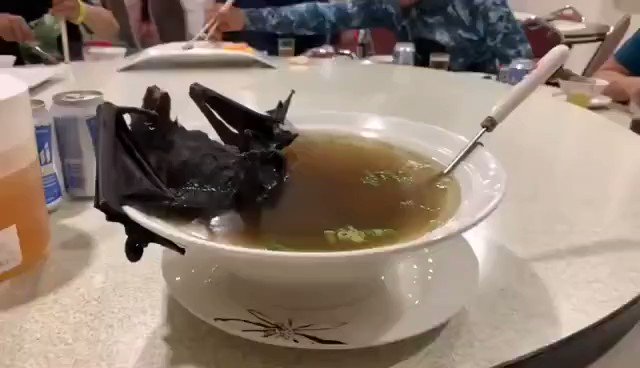 The
images have to be seen to be believed — they appear to show the
full body of a small black bat, leathery wings and all, perched in a
dish of brown liquid and leering like a vampire in disguise. One
video shows a girl putting the creature whole into her mouth as she
dines with friends. But it looks like the bats may have had the last
laugh.

The
Chinese outbreak of the SARS virus in the early 2000s was eventually
traced back
to a colony of horseshoe bats in Yunnan province. Since we know that
2019‐nCoV is genetically closer to SARS than it is to any other
virus, it seems probable that bats could be the carriers for this one
too. These bats do not appear to have the tell-tale large ears of
horseshoe bats, but they could be a closely-related species.

Most
suggestively, in some of the images the bats’ guts are visible
floating in the soup. If undercooked offal was consumed by humans
this a likely source of the virus reaching humans, as some organs are
breeding grounds for viruses.

Just
last year there were reports of
a plague that killed a husband and wife in western Mongolia —
unrelated to the present outbreak. The couple ate the raw stomach,
kidney and gall bladder of a marmot, and died soon after from a
severe case of pneumonic plague. This plague, while having symptoms
similar to the current outbreak, is caused by the bacteria Yersinia
pestis.
They used the offal as a traditional remedy. This prompted officials
to quarantine the couple’s township, but happily there was no
further spread of the plague.

Of
course, cooking meat properly and thoroughly is one way of killing
any bugs it may have been carrying. But viruses are more resistant to
heat than many bacteria, and in any case, do you really trust the
chefs serving up whole bats in murky broth to have passed their food
safety inspection with flying colors?

But
whether it is from snakes, bats or a combination of the two, as the
virus rages on, researchers at least have a lead, if not a cure.