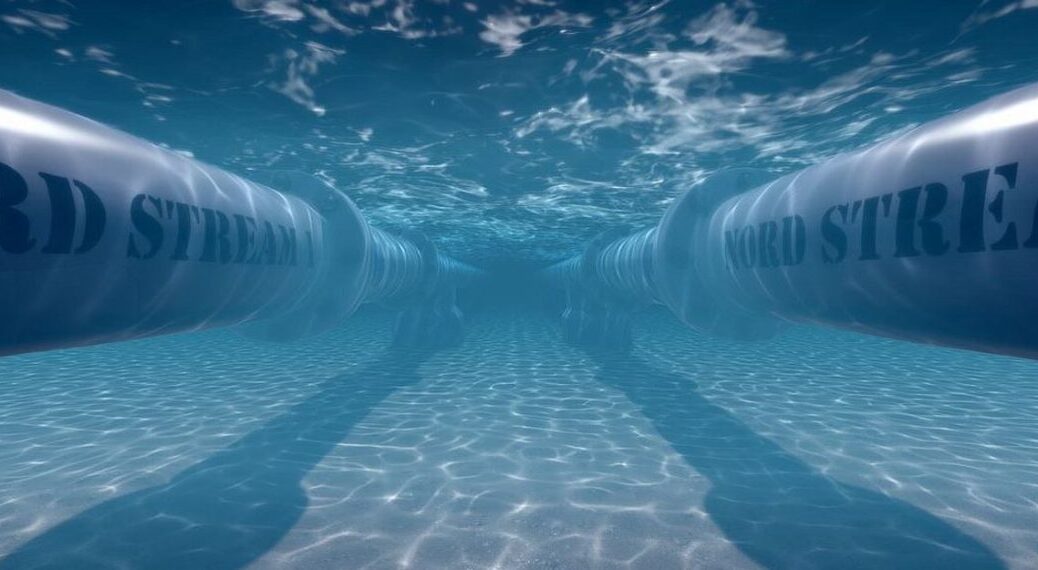 This is the best interpretation of events that I have heard:

This article points out how the attack on the pipeline is in Poland’s interests. Just remember this, and who Sikorski is married to – US neocon, Anne Applebaum. 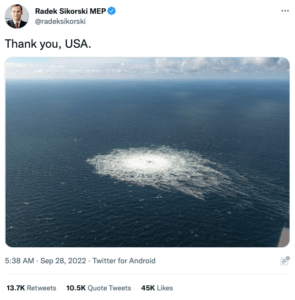 The world has entered a new phase of escalation of the global energy war after the Russian Nord Stream 1 and 2 pipelines were blown up. Russian analysts of the powerful Russian International Affair Counci appear confident that the pipeline blowing up was a plan executed by the US.

The goal is the geopolitical degradation, if not the dissolution of Germany and the rise of Poland as a continental Great Power.

We remind you that yesterday, as reported by WarNews247, shortly before the explosions in Nord Stream, the President of Poland and the Prime Ministers of Poland and Denmark inaugurated the Baltic Pipe pipeline which will transport 10 billion cubic meters of Norwegian natural gas to Poland every year and enable Warsaw to become 100% independent of Russian gas.

A few days ago, Poland demanded a mammoth 1.3 trillion euros in reparations from Germany for World War II.

What will ultimately be left of today’s Germany?

As the Russian International Affairs Council reports, this “terrorist attack” on Russia’s Nord Stream pipelines destroyed any possibility of a Russia-Germany energy rapprochement and immediately catapulted Poland into the position of one of the continent’s most pivotal energy hubs, thereby driving the plans of the Anglo-American Axis to divide and rule Europe to the next level.

The attack does indeed serve Poland’s greater interests for this very reason, even if she was probably not behind what happened or had prior knowledge of it, suspicion must fall on her Anglo-American Axis allies.

Both have an interest in dividing and ruling the EU by facilitating the rise of Poland as a continental Great Power capable of eventually competing with the bloc’s de facto German leader (at least in Central and Eastern Europe.

Aiming to take Germany out of the geopolitical and geoeconomic game for good, the Axis must not only successfully trick Germany into “suicide” economically through its compliance with anti-Russian sanctions, but also destroy any possibility of a meaningful strategic rapprochement with Russia in the future.

Sabotaging the Nord Stream pipelines accomplishes just that, completely preventing Germany from sticking to any energy plans it may have for the eventual restoration of relations with Russia.

There is no doubt that the Anglo-American Axis is benefiting the most from the ecological, terrorist attack carried out in the Baltic Sea against the two Nord Stream pipelines.

Both countries are far from the consequences of the ecological disaster they created and are thus able to advance their major strategic goals without any cost to themselves.

This terrorist attack destroyed any possibility of a Russo-German energy rapprochement, instantly catapulted Poland into the position of one of the continent’s most pivotal energy hubs, and thus took its plans to divide and rule Europe to the next level.

Fedorov: Only the United States benefits

Accidents on the Nord Stream 1 and 2 pipelines are beneficial only for the United States, emphasized Sergey Fedorov, a leading researcher at the European Institute of the Russian Academy of Sciences.

“If the gas pipelines are not repaired, Germany and other European countries will be without Russian raw materials.

Alternative solutions in the form of Yamal-Europe and the Ukrainian GTS are not capable of solving the problem of gas shortages in the European Union, so the shutdown of Nord Stream 1 and 2 makes the situation a dead end, in fact, it is a cessation of Russian gas exports to Germany and the EU.

The only way out of the crisis is through a compromise between Moscow and Brussels, but it is already hard enough to imagine such a scenario.

There is a strange coincidence: protests and demands for the start of Nord Stream 2 have increased in Germany, and this situation arises. Russia is interested in exporting natural gas to the European Union, the current crisis is only beneficial to our opponents.

“It can be assumed that someone could try to burn bridges in this way so that the Germans have no illusions about the possibility of resuming gas relations with the Russian Federation in full thanks to Nord Stream 2,” summarizes Fedorov.

Now the EU is rolling out the eighth package of sanctions, which includes the disconnection of Gazprombank from SWIFT, and such a step means the end of Russian gas exports to Europe due to the inability to make payments.

The accident at Nord Stream 1 and 2 reinforces this trend: a group of Western politicians want Europeans to end gas relations with Russia and stop buying raw materials from Gazprom, and this primarily concerns Germany.

Now, in order to restore ties, it is necessary to repair the natural gas pipelines, and for this, it is first necessary to reach at least an agreement.

“To solve such a problem, there should be a series of agreements, otherwise the situation is against Europe. If the winter is cold, it is not clear what Germany and other EU countries will do. So far, they have neither additional volumes to receive LNG capacity, nor liquefied gas on the international market,” states Fedorov.

“Only one thing is clear that what happened is in the hands of the Americans. The accident at Nord Stream 1 and 2 further breaks the natural gas bridge that theoretically existed between the Russian Federation and Germany ,” concludes Fedorov.

The United States has long set the goal of severing gas relations between Russia and the EU and is systematically moving towards its implementation.

“Russian gas supplies to Europe are not currently delivered via Nord Stream. This was even before the accident or sabotage.

If Germany compromises and makes peace with Russia, then theoretically, after the repair, deliveries could be launched via Nord Stream 1 and 2. However, now that both pipelines are damaged by accident or sabotage, it will take time for restoration.

This fact puts an end to the possibility of improving relations between the Russian Federation and the Federal Republic of Germany.

“Elites in Europe and the United States want to distance the Russian Federation and the EU as much as possible and block the scenario of restoration of relations. It can be assumed that the opponents of the Russian-European rapprochement are interested in such a development of events. Americans first”

The USA wants the dissolution of Germany: Mammoth reparations of 1.3 trillion. Euros the Poles will ask Berlin for World War II

Circles in the USA want the complete dissolution of Germany and the emergence of Poland as an American stronghold and pillar of the new Europe.

After the major energy blow that Germany received with its disconnection from Russian pipelines, a consequence of US policy, they are preparing a new, even stronger blow to Berlin:

Poland is preparing to demand mammoth reparations equivalent to 1/3 of German GDP!

Poland estimates that the losses it suffered during World War II due to Germany amount to 6.2 trillion. zlotys (1.32 trillion US dollars, 1.3 trillion euros), the leader of the ruling nationalist party said today and said Warsaw would formally seek reparations.

Poland’s biggest trading partner and also a member of the European Union and NATO, Germany has said in the past that all economic claims linked to World War II have been settled.

The new assessment of reparations owed is higher than the US$850 billion that a ruling party lawmaker had made in 2019. The ruling Law and Justice (PiS) party has repeatedly demanded reparations since taking power in 2015, but Poland has not has formally requested reparations.

“The presented amount was adopted using the most limited, conservative method, it would be possible to increase it ,” PiS leader Jaroslaw Kaczynski told a press conference.

The militant stance towards Germany, often used by PiS to mobilize its electoral audience, has strained relations with Berlin. It has intensified since Russia’s invasion of Ukraine amid criticism of Berlin’s reliance on Russian gas and its slowness to help Kyiv.

About six million Poles, including three million Polish Jews, were killed during the war, and Warsaw was leveled after an uprising in 1944 in which about 200,000 civilians died.

The German government and foreign ministry did not immediately respond to requests for comment.

In 1953 Poland’s then-communist government had given up all claims to war reparations under pressure from the Soviet Union, which wanted to release East Germany, also a Soviet satellite, from any debts. PiS says the deal is invalid because Poland could not negotiate a fair compensation.

Donald Tusk, the leader of the main opposition Party Citizens Platform, said today that Kaczynski’s announcement “had nothing to do with reparations”.

“It has to do with the internal political campaign in order to rebuild support for the ruling party,” he said.

PiS still leads in most opinion polls, but its gap with Citizens’ Platform has narrowed in recent months amid criticism over its handling of soaring inflation and the economic slowdown.

“Nein” from Germany to Poland

Germany rejected Poland’s request for reparations due to the losses suffered by the country during World War II, considering the issue “closed”.

Warsaw estimates that these losses amount to 1.3 trillion. euro.

“The federal government’s position has not changed, the issue of reparations is closed, ” a Foreign Office spokesman said.

“Poland renounced its right to new reparations a long time ago, in 1953, and has confirmed this renunciation many times,” he added.

This was so good I am reposting it